Miss Vermont Is a Science Nerd 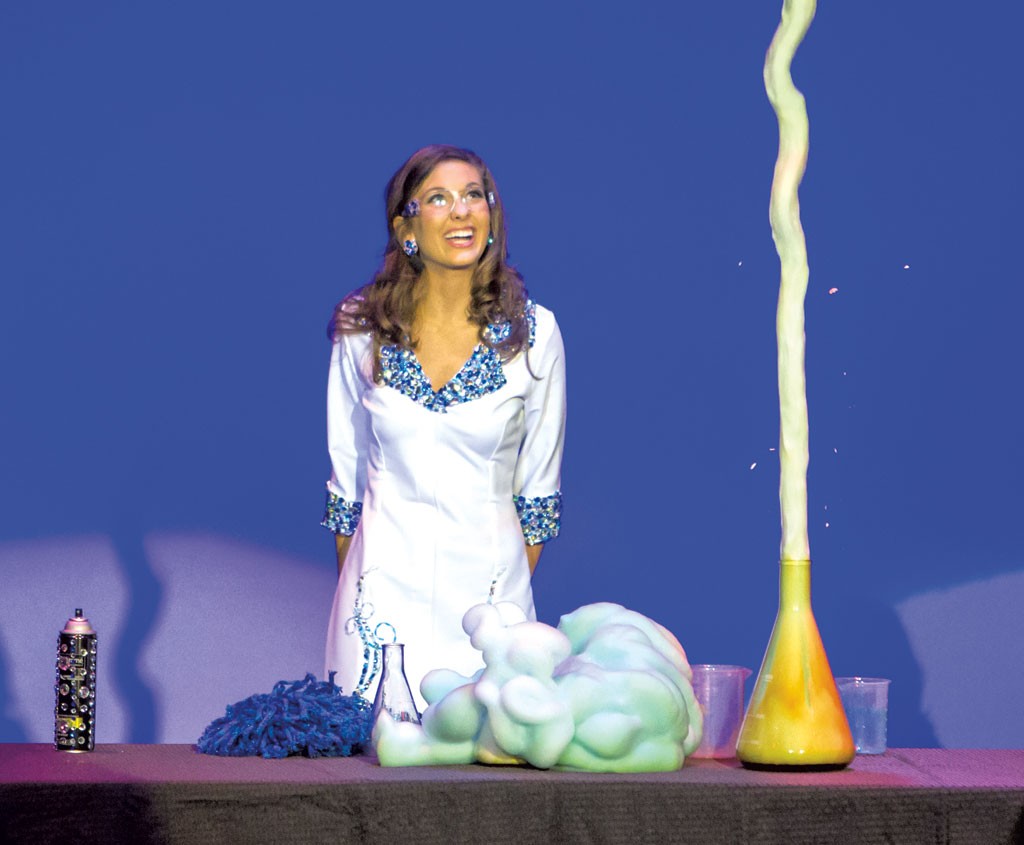 Alayna Westcom didn't earn her Miss Vermont 2015 crown by being just another pretty face. You might say she took a scientific approach to winning. In April, Westcom wowed the Miss Vermont judges in the talent portion of the pageant not by singing a song, playing a musical instrument or performing a magic act, but by conducting a science experiment live onstage.

Since her victory, Miss Vermont has been traveling around the state sharing her enthusiasm for science, technology, engineering and mathematics — collectively known as STEM — with the goal of talking to at least 10,000 Vermont schoolchildren.

But next week, Westcom will take time off from teaching to wow the judges on a national stage. On September 13, she'll vie against 51 other finalists for the title of Miss America 2016. And again, she'll perform an experiment onstage in hopes of blinding the judges with science.

Westcom's crown-winning experiment involved combining potassium iodide, hydrogen peroxide and dish soap to produce a dramatic, foamy eruption called "elephant's toothpaste." But highlighting STEM as her unique talent is no mere theatrical gimmick. The 24-year-old Bakersfield native lives and breathes the sciences. She earned her bachelor's degree in forensic science from Bay Path University in Longmeadow, Mass., and a graduate degree in medical laboratory science from the University of Vermont. Not too shabby, considering that Westcom and her older sister were the first members of their family to attend college.

Currently, Westcom works as a medical laboratory scientist at Northwestern Medical Center in St. Albans and as an autopsy technician for Vermont's chief medical examiner in Burlington. Next year, when her reign as Miss Vermont 2015 ends, she plans to apply to med school with the goal of becoming a medical examiner herself.

Westcom's use of science as a personal talent — the most important category for a Miss America contestant — comes at an opportune time. In June, British Nobel laureate Tim Hunt resigned from his position as honorary professor at University College London after his sexist remarks about women in science sparked an international firestorm of criticism.

Specifically, Hunt told an audience at the World Conference of Science Journalists in South Korea about his difficulties working with "girls" in science labs. "Three things happen when they are in the lab," he said. "You fall in love with them, they fall in love with you and, when you criticize them, they cry."

Notes Westcom, "I don't think I've ever cried in the lab. I'm not sure where that comes from."

Seven Days caught up with Westcom last week just before her departure for the Miss America 2016 competition in Atlantic City, N.J., where she just might leave the stage in tears of joy.

SEVEN DAYS: Why did you choose STEM as your focus in the Miss Vermont competition?

ALAYNA WESTCOM: All contestants choose what's called our personal platform, which we dedicate a year to, and mine is called "Success Through STEM." I travel around the state going into preschool, elementary and middle schools to teach science to kids at young ages. I chose mine because, for so many years when I was going to school and choosing a STEM career, I'd always been told, "You don't look like a scientist" or "Are you sure that's your career choice? That's not really for women." Sometimes little girls can be discouraged by hearing that and redirected into a different career path, which isn't fair.

SD: Growing up, were your teachers supportive of your plans to become a scientist?

AW: Most of my teachers were very supportive. If I wanted to put in the time and effort to pursue this, they told me it was something I could totally accomplish. It was the same thing for my parents. They weren't going to tell me I couldn't do something that I wanted to do. When I was 16, I started working in the medical field, in a surgeon's office. I also worked in the ER.

SD: Was there one particular math or science teacher who inspired you?

AW: Throughout my elementary, middle and high school education, we had several different science teachers who came through the school. There was one thing they all had in common: They wanted to do things that were hands-on. It wasn't necessarily one science teacher per se, but it was how they were teaching us. So we did dissections in seventh and eighth grade; we built our own roller coasters; we had science fairs every year. We had to pave our own way in learning science. That's how I got interested in it.

SD: What kind of science do you now teach in the schools?

AW: I not only talk about my career path and goals, I do my [science experiment] for the students because, obviously, it's a lot of fun for them. But it also depends on what the teacher is looking for. If they have a specific area of science that they're teaching at that time, I'm more than happy to incorporate it into my demonstration. I've done a home version of elephant's toothpaste, which is more interactive because kids can touch it. I've also made oobleck, which is a mixture of cornstarch and water that is a liquid if you just hold it but is a solid if you apply pressure.

SD: Do you focus on trying to get girls and young women interested in STEM?

AW: I do try to get young girls interested in STEM, but the way our world works, if we only have women — or only men — in a particular field, our country is not going to progress. So I want both little girls and little boys to get excited about STEM and to get involved in it.

SD: Do you still encounter the stereotype that pageant winners are just pretty faces but not intelligent?

AW: Absolutely. But for a long time, pageants have been conducted in a totally different way. The Miss America competition is the largest college scholarship program for young women in the United States. That means we don't win cars or furs coats or things like that. We win academic scholarships. That helps us pay off our loans or helps pay for school if we're still in school. That is something not a lot of people know about.

SD: Any hints about what you'll do for the talent portion of the Miss America 2016 competition?

AW: I'll be doing the same experiment [as in the Miss Vermont competition], but just a little bit bigger. The talent portion is the most heavily weighted portion of the competition. Talent is something you dedicate time and energy to, and something you have a passion for. There are rules, of course, such as you can't have any fire or projectiles. But there's never been a science experiment done on a Miss America stage that I'm aware of. So this is a little different and out of the box.

AW: Yes, I'm so excited to be the first to bring STEM to the Miss America competition. I've actually had a very positive reaction to it. Initially, I was thinking it might not go over as well as I'd like it to, but it's actually done the complete opposite. People are so excited to see it and are wondering exactly what's going to happen.

The original print version of this article was headlined "STEM Sells"