Mirabelles Moves to the ’Burbs, Focuses on Bakery Biz 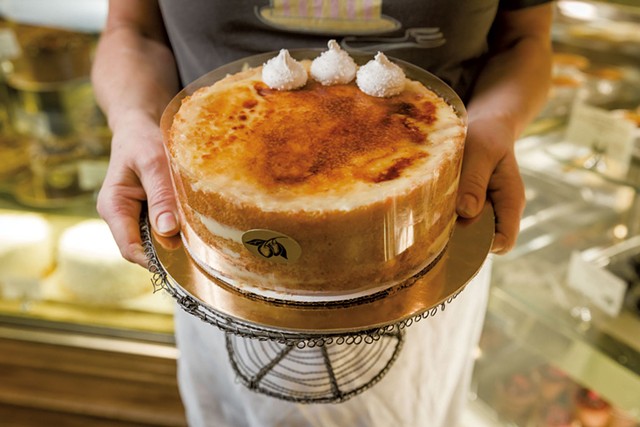 Almost 30 years ago, two friends who met at the New England Culinary Institute in Montpelier opened a bakery and café on Main Street in Burlington.

Alison Lane and Andrew Silva, then in their twenties, named their business Mirabelles. Tablecloths made by Lane's mother covered a set of glass-topped tables. The deli case held imported cheese and olives. Customers ordered at the counter and could pair their croissant with a latte — the espresso drink still a rarity in Burlington in the early '90s.

Over time, Mirabelles expanded in size and scope into its well-loved current form: a table-service breakfast and lunch restaurant, now called Mirabelles Café, that turns out meals of consistent top quality, pleasing looks and affordable price. In addition, its on-site bakery produces an eye-popping and scrumptious array of cakes, cookies, pastries, muffins, pies, macarons and other sweets.

Now Mirabelles is embarking on its most radical transformation in three decades. Lane and Silva will close their downtown café on January 25 and move to new and bigger quarters in South Burlington, they announced on January 6.

In the new space, to open the week of February 10, Mirabelles will rebrand as Mirabelles Bakery. No longer offering breakfast and lunch service, the business will focus on its retail bakery and expand its line of frozen pastries and pies, with an emphasis on four-packs of frozen croissants, the chef-partners said.

"Andrew and I decided that we just wanted to simplify things," said Lane, 55. "We've done this so long; simple was the direction."

Silva, 58, added that people often have a variety of work experiences and opportunities over the course of 30 years. "When you have your own business, you have to reinvigorate and make some changes, too," he said. "And get excited about things."

The loss of Mirabelles' renowned breakfast and lunch has been lamented on social media even as its new venture is applauded. Among more than 200 comments about the news on Mirabelles' Facebook page is one from Frank Pace, chef at Burlington's the Great Northern.

"Congratulations!!" Pace wrote. "You guys are an inspiration and institution here in Vermont!! Thank you for your amazing work and passion."

Constantine Poulos, owner of the building on Main Street that houses Mirabelles, paid verbal tribute to his longtime tenants.

"They're a great duo, Alison and Andrew," Poulos told Seven Days. "They've been terrific ... The only problem was, the cakes and the pies and all that stuff, great stuff. You can't eat too much of that, [or] you get fat."

Lane herself called the transition "bittersweet." But, talking with Seven Days last week at their new South Burlington site, the chefs said they're "super excited" to work in a bigger space designed to fit their needs. They're also excited about the opportunities their new pared-down business model will bring.

While the conversation focused on plans for the new bakery, Lane and Silva also looked back on the making of Mirabelles. They recalled having the initial impulse to open a café in 1990, after a year of teaching at NECI's then-new Essex campus. "We became really good friends, and we decided, 'Let's do something different,'" Lane said. 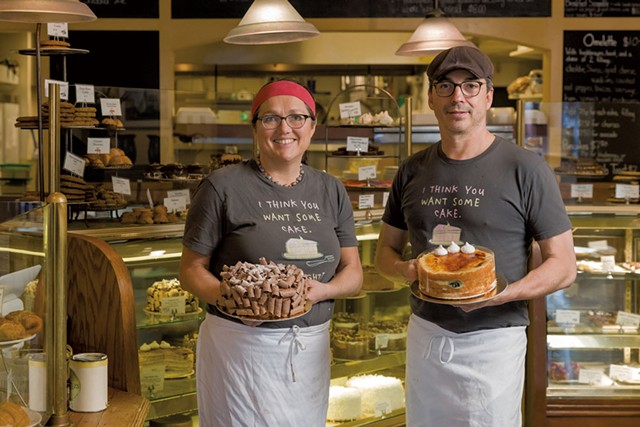 Mirabelles was both a new career for the young chefs and something new and different for Burlington, predating the coffee shops and cafés that would become prevalent in the city.

Lane and Silva can still picture the curlicue design of the dining chairs and the galley kitchen where they worked together in the early years, making sweets, soups and sandwiches. But they can't remember what they paid for the business, a transaction that entailed purchasing the equipment from the defunct Main Street Bakery and Café.

Lane and Silva looked at each other and shrugged. Now they're transporting an 80-quart mixer across town and moving on.

They'd been seeking a new space for several years, they said, having outgrown the kitchen and storage area on Main Street. The search included locations in Burlington, where they hoped to stay downtown. But they couldn't find a place with the essential ingredients: a big box to build out, and a loading dock.

The 3,000-square-foot space they settled on, at 3060 Williston Road, is in the last stage of renovation. Mirabelles Bakery occupies the back of a block of businesses that houses Vacuum City closer to the street. The construction project involves converting an electrical contractor's former headquarters into a production kitchen and retail space.

The front retail area will display the baked goods that Mirabelles customers know well: chocolate-raspberry mousse cake, croissants, blueberry muffins, opera bars, fruit tarts, holiday pies and weekend doughnuts. Coffee, tea, espresso drinks and pastries will be available to take out or eat at a counter. A freezer case and refrigerator will be stocked with the line of foods — chicken pot pie, tourtière, puff pastry, quiche, croissants — that Lane and Silva intend to develop in their new location.

The kitchen is big, open and convenient for deliveries and distribution. Twelve to 15 people will be employed in South Burlington, down from about 24 full- and part-time employees in Burlington, according to the owners. The expanded baking operation reflects the current state of the labor market, Lane and Silva said: While line cooks are increasingly hard to find, bakers are not.

The new business plan includes distributing Mirabelles' frozen food beyond Chittenden County and Vermont. The bakery has hired a PR and marketing firm, Charlotte-based Junapr, to help expand the market.

Junapr's owner, Nicole Junas Ravlin, thinks Mirabelles could grow beyond the East Coast and ultimately have national reach. "People who care about quality products that are made by hand from scratch — and supporting smaller businesses — would be the right kind of mix for them," she said. "I would expect that, next year, you'll be seeing [Mirabelles products] beyond the borders of Vermont, for sure."

In the meantime, the Mirabelles team, which has baked thousands of cakes for other people's occasions, doesn't plan to make itself a goodbye cake. Instead, the owners will throw a party to celebrate their move and welcome people to their new location.

"I feel like it will be too sad to have a party on the last day," Lane said. "We'll do a more festive thing, a grand opening in February."

Mirabelles in 2019 by the Numbers