Mind the Gap: A Getaway on and Around Lake Willoughby | Staytripper | Seven Days | Vermont's Independent Voice

Nothing adequately prepares you for the spectacle of Lake Willoughby, a glacial gash between two fjord-like mountains in Vermont's Northeast Kingdom. Although it's been around for at least 11,500 years, the state's most dramatic landscape has a way of surprising visitors — including returning ones, like me. Its ice-carved splendor reveals itself, like a secret, and takes your breath away.

The northern approach, on Route 58, is arguably the most awesome. After passing through the rural towns of Lowell, Irasburg, Orleans, Brownington and Evansville, the road climbs to a stunning view of the Willoughby Gap, aka Notch. The sheer cliffs of Mount Pisgah and Mount Hor rise up on either side of the deep blue water, two halves of a whole cleaved by nature.

"It's like you're in the geology," my traveling companion noted on a recent midweek visit to the popular vacation spot.

Although it's been around for at least 11,500 years, the state's most dramatic landscape has a way of surprising visitors. tweet this

It feels that way at lake level, too. An expansive public beach at the northernmost point — with plenty of parking and port-a-lets — marks one end of the mostly seasonal settlement of Westmore. From there, the town extends along Route 5A, an engineering marvel that winds around the steep east side of the lake. Five shoulder-less miles lead to the south end of Willoughby and White Caps Campground, which rents kayaks, paddleboards and canoes. Across from it is another parking area and a second public beach. This one is clothing-optional. 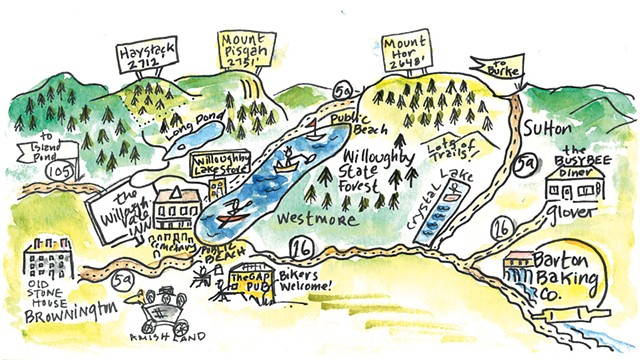 Between the two beaches are summer camps of all varieties, rental cabins, a boat launch and the all-purpose Willoughby Lake Store, which sells everything from bait to Barr Hill gin, seven days a week, 7 a.m. to 9 p.m. Made-to-order sandwiches, pizzas and pub food are available for takeout or to eat at outdoor tables behind the store. From Wednesday through Sunday, you can get a drink with that.

The most distinctive commercial property in Westmore, the all-seasons WilloughVale Inn and Cottages, closed its bar and restaurant during the pandemic. It also changed ownership. The new proprietor, Massachusetts-based Edwin Alexanderian, said he considered converting the building to a private residence, but the inn's housekeeper convinced him to keep it as is: a lovely place to stay for approximately $200 a night.

You have to commit to at least two nights to score a waterfront cabin on the property. But the view from our room, in the inn, was almost as good. We could also see the WilloughVale's waterfront lawn and various boats available to guests. We arrived at 5 p.m. and, despite a foreboding weather forecast, immediately set out in kayaks on the famously deep, cold lake.

There's no better way to see the charming camps that dot the shore, some with punny names like Brookadoon and Restmore. The west side of Willoughby has residences, too, but there is no through road, so it's less developed. Not a single motorboat interrupted our paddle, and the skies cleared, turning the water from slate to brilliant blue.

We would have lingered longer on the lake, or braved a swim, if the two of us weren't so concerned about finding food. On the way into town, we'd passed the understated summer-only Will O Barn Snack Bar, specializing in fried seafood delivered twice weekly from Maine — and the killer view described above. We later learned the only full-service, sit-down restaurant in Westmore is little farther down the hill. The Gap Pub & Grill serves lunch and dinner from noon to 8 p.m. Wednesday through Sunday. The "pub" is open seven days a week from noon to 10 p.m.

The Gap has outdoor seating, too, but we opted to eat inside. Dark and low-slung, the place seemed more like a bar at first. But it turned out to have an ambitious and varied menu; a great vibe; and prompt, friendly service. The food was flavorful and satisfying, from the "Gapetizers" — cream of asparagus soup and fried green beans — to the Pisgah burger with grilled onions, peppers and mushrooms.

Filled with the Gap's hand-cut sweet potato fries, we drove back to our inn, crawled into our respective double beds and fell asleep to the sound of loons calling to one another.

The next morning brought another culinary challenge: the search for a decent cup of coffee. The WilloughVale provides in-room java only, and we were looking for breakfast, too. So, we set off in the car for Barton, home of Crystal Lake State Park and Barton Baking Company, seven miles east on Route 16. We found that the waterfront didn't open until 10 a.m., and even though its sign suggested otherwise, the bakery was shuttered. Like so many businesses in Vermont, this one is apparently just one crisis away from having to close for the day.

I asked two men in a pickup truck to recommend an alternate breakfast spot. They directed us just a few miles south on 16 to the Busy Bee Diner in Glover, of Bread and Puppet Theater fame. That route would have brought us by the former beloved Parson's Corner Diner, which reopened in May as the Parsons Pub and Grill. It serves lunch Wednesday through Saturday, dinner Tuesday through Saturday, and Sunday brunch. But no breakfast.

We never laid eyes on the resurrected restaurant because we took a wrong turn and wound up in West Burke. In the end, the best bet for coffee turned out to be back at the Willoughby Lake Store. While the selection there was more Maplefields than Starbucks, there was a saving grace: In a nearby cooler was an open container of maple syrup, Vermont's favorite coffee sweetener.

Plus, baker Windy Currier had recently removed a tray of giant blueberry muffins from the store's outsize oven.

Now caffeinated and full of carbs, we were ready for a walk in the woods. In addition to boating, swimming and fishing, hiking is a big reason people visit the Lake Willoughby region. The most popular climb is Mount Pisgah; all three trails that lead to the summit — from the east, north and south — afford dizzying views of the lake below. On the other side of the water, Mount Hor offers a different, equally dramatic perspective. Some of the routes to the summit incorporate old Civilian Conservation Corps roads.

I had my eye on Haystack Mountain, a blob next to Pisgah that I had noticed two weeks prior from the top of Burke Mountain. To reach it, you drive uphill due east from the Willoughby Lake Store on Long Pond Road, which quickly turns to dirt. But first we got a close-up look at serene, sparsely populated Long Pond, with its lone lovely island. The road skirts it enticingly, conjuring second-home fantasies.

We took the south trail up Haystack, which started out as an easy walk on a wide path with wildflowers on both sides. Then it turned into the woods, narrowed to a trail and got significantly steeper. But the hard part was short — the peak is only 2,712 feet — and the rounded top offered three different views. I gratefully took in the whole range of Northeast Kingdom mountains, including Jay Peak and Bald Mountain, in all their purple majesty, as well as seldom-seen lakes such as Mud and Newark ponds.

On the way down Haystack, my friend whispered conspiratorially, "It's still not raining." We'd dutifully brought our rain gear up the mountain, expecting the worst, but apparently the meteorologists had gotten the forecast wrong. Our good luck held through a visit to the Old Stone House Museum & Historic Village in Brownington, the former home of Vermont's first African American college graduate and legislator, Alexander Twilight. The view from a lookout tower on the property rivals the one from Haystack. 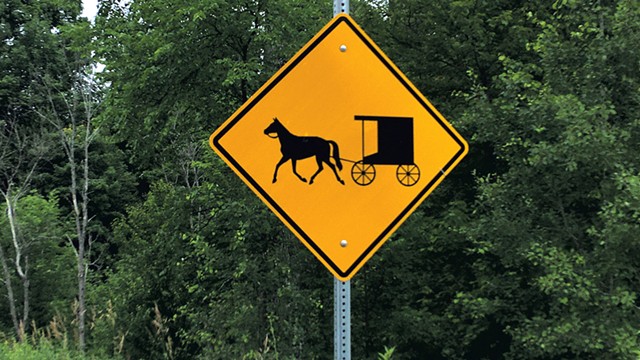 We also stayed dry while buying produce at an Amish farmstand and for most of the two-hour drive home through rural Lamoille and Franklin counties. We were almost back in Burlington when the skies finally opened up — a good reminder never to let a bad-weather forecast prevent you from exploring Vermont.

Staytripper The Gap Pub and Grill