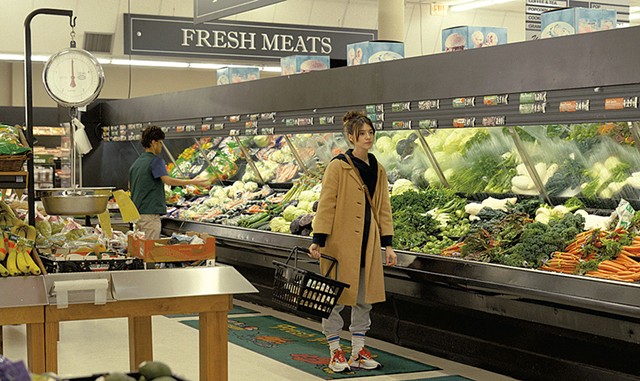 This week the top item on my watch list is Turning Red, the Pixar movie that everybody's talking about despite its absence from theaters. While I mulled over the prospect of shelling out for Disney+, I watched a movie that's about "turning red" in a decidedly more R-rated sense.

Spurred by #MeToo, overtly feminist horror and thriller flicks are cropping up everywhere these days. Fresh is a riff on these subgenres directed by Mimi Cave and scripted by Lauryn Kahn, both making their feature debuts. It premiered at this year's Sundance Film Festival and is streaming on Hulu.

Twentysomething Noa (Daisy Edgar-Jones) has had it with online dating. After a particularly meh encounter and one unsolicited graphic pic too many, she swears off the practice — only to meet the guy of her dreams in the produce section of the supermarket. "I didn't think people met each other in real life," she tells her best friend incredulously.

Steve (Sebastian Stan) is funny and cute in a rumpled, approachable way. He wins over Noa by doing a self-deprecating critique of his own bad pickup line. Soon they're canoodling at a dive bar and engaging in adorkable impromptu dance sessions.

This rom-com all takes place in the first 30 minutes of the movie — an extended pre-credits sequence. What happens next, when Steve takes Noa on a weekend trip, is an artful butchery of everything we've seen so far.

I didn't expect much freshness from Fresh. Dark indie comedies with macabre twists are nothing new, and they have a standard MO: lure in viewers with promises of subversive social commentary, only to end up coasting on shock value.

While Fresh isn't exactly material for a PhD thesis, it is a genuinely gripping film about obsession, exploitation and revenge. Credit goes partly to the director and partly to the two leads, who inhabit what could have been stock roles with intense conviction.

Let's take a moment to sing the praises of Sebastian Stan. While he's best known for his gig as Captain America's buddy in the Marvel movies, he's developed a sideline as the go-to guy to play dim-witted sleazeballs in dark indie comedies. From The Bronze to I, Tonya to his role as Tommy Lee in the currently streaming "Pam & Tommy," Stan has perfected the persona of a muscle-bound heel with a dastardly sneer and just a hint of an inferiority complex.

In the early scenes of Fresh, the actor dials down his villainy and plays up his vulnerability to incarnate Noa's perfect mate. But when Steve makes his inevitable heel turn, his manner barely changes. We (and Noa) simply see him through a new lens, all the attractive features distorted into monstrous ones. His love is still true, but that ends up being his most skin-crawling trait.

With her fresh face and wide eyes, Edgar-Jones (who played Marianne in "Normal People") is a natural choice for a rom-com heroine. Like many such protagonists, Noa is relatable but underwritten. When she eventually tries to outwit Steve by convincing him she's as demented as he is, we don't know whether it's 100 percent a put-on or whether she does have a dark side. Still, Edgar-Jones makes a believable transition from ingénue to schemer to blood-spattered avenger.

Speaking of blood, there's a lot of it in this movie, along with shots of glistening meat that evoke simultaneous fascination and nausea. Fresh is not for the squeamish. The movie's visual through line consists of ultra-close-up shots of lips and mouths, imagery that turns flirting and eating into obscene-looking activities.

Known for music videos, Cave has gone out of her way to fill the movie with bright colors and aesthetically arresting tableaux. Steve's country getaway, where much of the action takes place, features rough-hewn cave walls, mod décor and a kitchen that would make any foodie salivate (though you really don't want to salivate during this movie). It's a perfectly trippy setting for several scenes that suggest music videos from hell, scored to eerie covers of '80s and '90s alt classics.

Like all good horror movies, Fresh is essentially a materialization of one of humanity's worst fears — in this case, women's fear that the man they carefully vetted for romantic suitability will turn out to be incalculably worse than the ones they rejected. The movie doesn't offer many solutions to those who are putting themselves through the online-dating meat grinder. But then, offering false hope might be in bad taste.

Boxing Helena (1993; Xfinity Stream): Directed by Jennifer Chambers Lynch — David Lynch's daughter — and starring Sherilyn Fenn of "Twin Peaks," this movie with an out-there premise about a twisted male-female relationship was a notorious bomb. It's also a likely inspiration for Fresh.

A Certain Hunger by Chelsea G. Summers: Authored by a former Vermonter, this 2020 novel flips the usual script with its story of a food writer who literally devours her lovers. In the words of Bon Appétit, "This book is crazy. You have to read it."