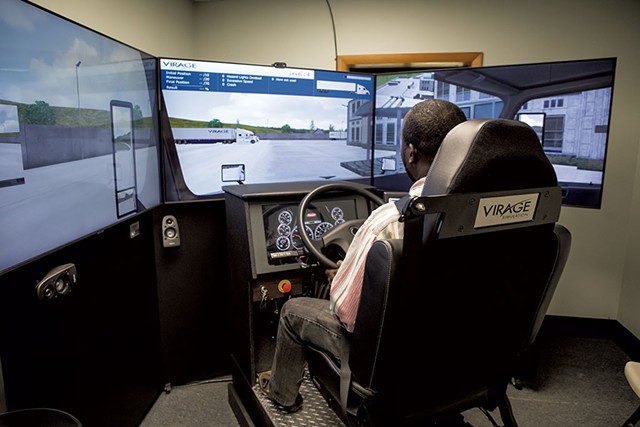 Sitting in the cab of the truck simulator at Pro Driver Training, a commercial driving school in Milton, I had the lofty view of a real big rig, seven feet above the road. Through the three-screen video display, an SUV below looked like a Matchbox car. I turned the key in the ignition, gripped the trekking pole-like gearshift and began the diabolically tricky process of double-clutching to put the truck in gear. And then: We were rolling!

Alas, the virtual car in front of me (were those Massachusetts plates?) did not roll. The startlingly real ccrrrrunnnch that erupted from the simulator, as 80,000 pounds of truck met the ass of the Mass. car, was punctuated by an instructor's cluck and chuckle.

The simulator "saves a lot of wear and tear on the trucks," Pro Driver Training co-owner Liz Green said dryly, as a sound like a spoon caught in an InSinkErator signaled more poor shifting.

Clearly, driving a tractor trailer is not for everyone, but Pro Driver Training will teach anyone — even double clutch-averse journalists, at least for a day.

"It's a good profession in some uncertain times." Guy Horn tweet this

Pro Driver Training operates out of an industrial park off Exit 17 on Interstate 89, recognizable by very large vehicles bearing "Student Driver" stickers. On the day I visited, in a designated "backing range" in one corner of the vast lot, a trainee practiced reversing a rig into a lane marked by orange cones. As the cones disappeared under his wheels, his fellow students, observing from a safe distance on the sidelines, rudely assessed his performance with hoots and catcalls.

Pro Driver Training also offers the Class B CDL course, which qualifies a driver to operate a school bus, dump truck, cement mixer or the like, but not tractor trailers. One difference between the two licenses is that Class A requires mastery of the double clutch — a method of shifting gears that is mainly used in vehicles with unsynchronized manual transmissions.

Instead of depressing the clutch and shifting directly to another gear, as they would in their Volkswagen Jetta, the driver first shifts out of gear into neutral and attempts to match the engine speed to the gear speed before shifting to the next gear. For non-truckers, the skill is about as challenging as playing piano while climbing stairs.

"It's all about getting the rhythm!" the instructors say.

But a session on Virage's massive VS600M simulator was humbling. The $350,000 machine replicates the driver's cab and operations with a triptych of video screens that generate various road and weather conditions. It will even throw a deer in your path to see whether you know where the buck stops. I, for one, was surprised to learn that an 18-wheeler driving 65 mph takes the length of two football fields to come to a complete stop. 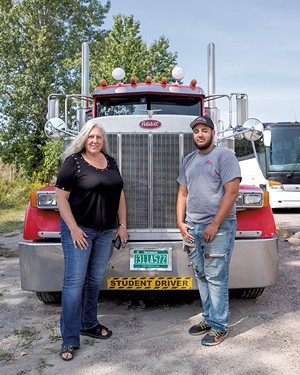 A warm, affable woman, Green, 52, took over Pro Driver Training with her son, Alex Johnson, in 2018 from a previous owner who was in failing health. Green acts as boss, den mother and cheerleader for her students: She wants them to succeed. Her husband, Rick, is the owner of Richard Green Trucking in Enosburg, which really got rolling in 1984 when it began hauling some weirdly named ice cream for a local startup called Ben & Jerry's.

With a current fleet of nine trucks, PDT had 26 trainees on its roster last month, including three women. Many are looking for a career change; others heard that drivers are needed and want to supply that demand.

In part because of the country's increased reliance on mail-order and delivery services in the time of COVID-19, the wheels of the trucking industry keep turning. With its rep as a "pandemic-proof" vocation, trucking has drawn a diverse array of students and instructors to a field where salaries can sometimes reach six figures.

"It's a good profession in some uncertain times," said Guy Horn, a recruiter for Werner Enterprises. Based in Omaha, Neb., the transportation and logistics company employs 7,000 drivers nationwide. "If you're still willing to work, you still have those opportunities," Horn continued. "The pay is amazing for a driver right out of pro driver school."

Trucks still make the U.S. economy roll. By weight and value, they carry more freight than every other transportation mode combined — a total of 70 percent of all goods in the U.S., according to the Bureau of Transportation Statistics.

Nearly one of every seven registered vehicles on the road is a commercial truck. The industry employs about 6 percent of the nation's workforce. Drivers take home a median annual wage of $47,000, compared with about $42,000 across all occupations, according to the U.S. Bureau of Labor Statistics.

Those numbers made an impression on current PDT student Ahmed Abdi, who fled the civil strife in his native Somalia in 2004, when he was 19 years old. In Vermont, he ultimately found work as a welder and lives with his wife and five children, ages 5 to 12, in a house in Burlington's Old North End built by Habitat for Humanity.

"That was my first goal: to have my own house," Abdi said. "So now I'm trying to move ahead."

Like many PDT trainees, Abdi applied for and received a Vermont state grant to pay part of the $5,700 tuition.

Burlington's Mike Brault, an IBM programmer for 32 years, took the training course under the previous owners and now is one of PDT's most experienced instructors.

"I just kind of fell into this," he said. "I had no plans of becoming an instructor, but I love doing it. I meet so many different people that I wouldn't have ever met."

He's taught students from Nepal who are just learning English and have "driven" only bicycles. He's helped a deaf person get his CDL.

Backing, steering, parking and shifting are all part of the PDT curriculum. Some students find memorizing the long list of pre-drive vehicle safety checks the most daunting. Brault said shifting and backing up the rig challenge most students.

"It's a lot of teaching at first, a lot of commands," Brault said. "I'll tell them, 'Let's stop the truck and start over.' The simulator helps a lot."

Farmers, he noted, are quick learners because they've driven tractors.

An even temperament is a key trait in a driver, according to Brault. He stresses patience, because a trainee who becomes frustrated or angry is not an ideal candidate for piloting a 40-ton vehicle at high speed. One student got so angry in training that he had to be dismissed, Green said. 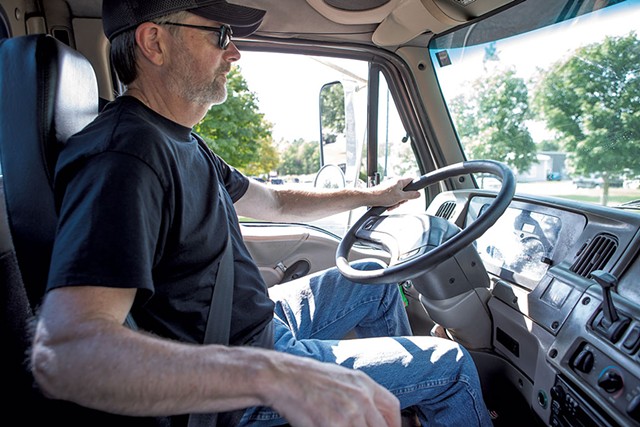 Instructor Hal Porter of St. Albans has wanted to drive a truck ever since he saw actor Burt Reynolds in Smokey and the Bandit. Drugs and drink T-boned that goal until Porter got sober 12 years ago and went to school to become a social counselor. Green heard Porter speak at a job fair and offered him an instructor's job, which he qualified for after taking the Class A CDL course and passing a Vermont state exam.

"I still get to work with people," Porter said, "but someday I hope to drive." In the meantime, he said, he's found a passion for working with folks "who have absolutely no clue how to drive a truck."

PDT graduates usually land jobs quickly, which Green ascribes to a shortage of drivers. The American Trucking Associations, the nation's largest group representing the industry, claimed that there was a deficit of 61,000 drivers when COVID-19 hit and predicts a shortage of 160,000 drivers by 2028.

Not everyone in the industry believes the ATA's claims of a severe shortfall of drivers to fill seats. Todd Spencer, president of the Owner-Operator Independent Drivers Association, which represents more than 150,000 mostly self-employed truck drivers in the U.S., told the NPR program "Planet Money" that the industry is experiencing not a shortage but a problem of retention due to an aging workforce and quick turnover among long-haulers.

Whether these different contentions are fact or fiction, the industry is on the cusp of change. Looming on the horizon — admittedly a far horizon — are autonomous trucks, driverless dreadnoughts recently featured on "60 Minutes." In 2019, Starsky Robotics sent a driverless 35,000-pound rig down the Florida Turnpike, heralding an age of experimentation that may reinvent the 18-wheeler.

For now, personal reinvention is what appeals to many drivers about the job. Wayne Davis spent 15 years in the restaurant business and was training to be manager at Uno Pizzeria & Grill in South Burlington when the pandemic closed it down. In April, he enrolled at PDT, breezed through the course and was hired immediately by JBS Carriers. Now he's delivering meat on reefers — refrigerated trucks — between Pennsylvania and Colorado.

His ultimate goal is to drive for a Vermont company so he can sleep in his own bed. "This is the first time in 30 years of working," he said, "that I can honestly say that I like my job."

The original print version of this article was headlined "Truck Start"