Milton, By the Skin of My Teeth | 20/20 Hindsight | Seven Days | Vermont's Independent Voice

Milton, By the Skin of My Teeth 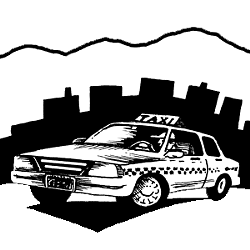 I’ve learned to turn down fares from the obviously and totally hammered. However, the “decline” is a decision that must be made before the person gets into the cab. This can be a tough judgment call.

Last night, I take the guy. Once he hits the seat, I realize that he is drunker than he looked on the street. Maybe the fancy duds fooled me, I don’t know. And, he needs to go to Milton. He gets this out before slumping over in the shotgun, sleepytime-time.

I shake him, he comes to and I say, “Thirty bucks — could you pay me now?”

“Suuuure,” he says and fishes out a couple twenties. This only takes him about four minutes. “Keep it,” he manages to get out as he passes me the bills. Then it’s naptime again.

On the highway between Winooski and Milton, his left arm suddenly swings across my body. I figure he must be dreaming and just lift it back to his side of the seat. Then he says, “OK, we gotta pull over.”

“You gonna blow?” I ask, nonchalantly.

“Yep,” he says, and I quickly pull to the shoulder and click on the four-ways.