Milton Busker, You Are What You Pretend to Be | Album Review | Seven Days | Vermont's Independent Voice

Milton Busker, You Are What You Pretend to Be 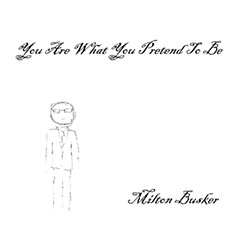 Unless you keep a very close ear on the singer-songwriter sets at venues like Radio Bean and the Skinny Pancake, you could be forgiven for not knowing the name Milton Busker. His presence in the folk-pop scene over the past decade and a half has been inconsistent but rewarding. Busker, who calls himself "the world's foremost purveyor of suit-folk," won the Advance Music Singer/Songwriter Contest back in 2002. He dropped an EP on CD, Dance Songs Vol. II, that same year, before mysteriously vanishing from the music scene.

Fast-forward about a decade to 2013, when Busker emerged from his music-less bunker. He rereleased his older EP in digital form, adding two more tracks and branding it as Dance Songs, Vol. II+. In keeping with his slow-pitch approach, Busker took three years to release his latest album, You Are What You Pretend to Be.

Busker sends a warning shot across our bow on opener "The Meanest Thing I'll Ever Write." The song kicks off the album with cheery guitar strumming and wry, knowing lyrics about hiding who you really are. It's hard to believe that the generally winsome Busker could be truly mean, but his only-half-ironic musings lend some credence to the claim.

Up next is "Dogs at the Door," which — similar to the companion instrumental "Dogs at the Café," a few tracks later — is an easy-to-gloss-over jazz-pop number. These moments are certainly not bad, just a bit bland. The same goes for "The Whole."

"Redemption on Pearl" is Busker's strongest and most affecting vocal performance. His breathy voice is simultaneously urgent and distant, conveying a range of emotions with poise and control.

Punchy vocal doo-wop and xylophonic keys open "The Interrogator." It's a get-up-and-go kind of tune, reminiscent of Spoon's foot-tapping numbers "The Underdog" and "The Way We Get By."

Rapid synth beats combined with a surf-rock guitar line warm up the sixth cut, "My Fear of Losing You." Evoking a one hit-wonder, Flock of Seagulls vibe, it's an energetic track that helps Busker stand out from the generic pop-folk crowd.

Slow and tender, "Babies to War" is a cautionary tale of growing up too fast and facing the cruel world before you're ready. "Don't wake yet / Stay and dream while you still can," Busker advises.

Busker's closing cover of Elliott Smith's "Pitseleh" is a wistful, humble nod to the late indie icon, who seems to have inspired some of Busker's hushed vocals.

On You Are What You Pretend to Be, Busker sheds his reliance on guitar-centric arrangements and embraces more varied instrumentation. He seems simultaneously emboldened and relaxed by jaunty percussion and some surprising keyboard elements. A breezy warmth sweeps through the album, making for easy summer listening.

Milton Busker's You Are What You Pretend to Be is available at miltonbusker.com.

Speaking of Milton Busker, You Are What You Pretend To Be

Album Review Milton Busker You Are What You Pretend to Be