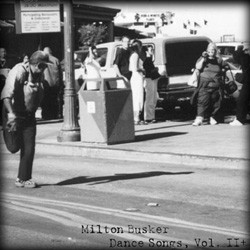 I first encountered Milton Busker over burgers at ¡Duino! (Duende) a few months ago. During a conversation with a buddy — probably about women or … OK, it was most certainly about women — I paused, having caught a sweet, breathy croon and the ripple of acoustic guitar above the warm hum of conversational chatter from the next room. Peering into Radio Bean, I spied a man sitting onstage with a guitar. To his left lay a pair of shiny, black dress shoes. Upon his feet were flip-flops, a curious contrast to his sharp, dark suit.

Busker bills himself as “the world’s foremost purveyor of suit-folk.” It’s a designation that, ahem, suits him. What followed was a compelling set from an obviously seasoned performer. Drawing from his originals and well-placed covers — songs that provided a fitting soundtrack to that conversation about love and relationships — Busker plied his trade with a quiet confidence, steeled by fine instrumental chops and beautiful, versatile, measured vocal delivery.

A week or so later, Busker emailed to introduce himself. Turns out he was an aspiring singer-songwriter in Burlington about a decade ago. He won the Advance Music Singer-Songwriter Contest in 2002. Shortly after that, he released Dance Songs Vol. II on CD as an EP. And then he essentially disappeared, musically speaking. He says he’s not sure what happened to those 10-ish years, but it’s suspected that “marriage, children and paying work were involved.”

Now Busker is performing regularly again. And he’s rereleased his EP digitally, with two additional tracks, as Dance Songs, Vol. II+. Much as his performance at Radio Bean impressed with sly songwriting and polish, the EP represents one of the finest local singer-songwriter releases in recent memory — even though it was previously lost to our collective memory 10 years ago.

“Ordinary Day” is a hushed ode to a hardworking lover that suggests facing the daily grind is anything but ordinary — it’s noble. Like many of the songs here — “Jesus in Chains” and “All the Same to You,” especially — this one is informed by a melodic sensibility that winks at Elliot Smith, an acknowledged and obvious influence. But Busker, perhaps owing to grown-up maturity, never succumbs to hero worship. He often tempers Smith’s morose worldview with a tender, cagey sense of humor — as on closer “Stupid Lullaby” — befitting a troubadour with a penchant for suits and sandals.