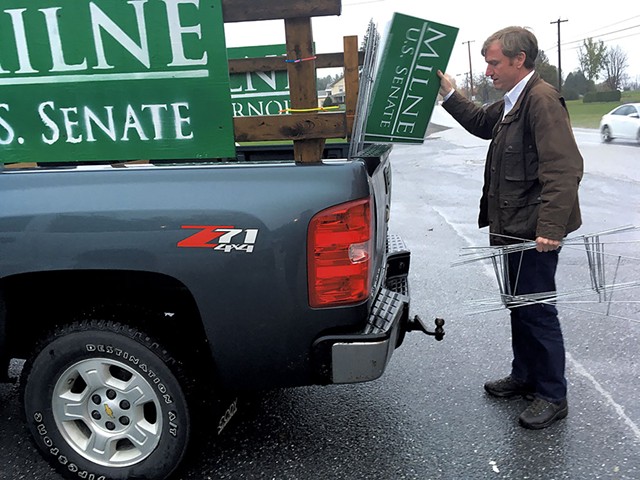 Scott Milne walked through a predawn drizzle and entered the grimy garage of Markowski Excavating on one of the final days of his long-shot campaign to unseat U.S. Sen. Patrick Leahy (D-Vt.). At 6 a.m. in the Rutland County community of Florence, half the Markowski crew was already out on a job in Cavendish, an hour's drive away. The remaining 20 or so employees, wearing dirt-stained jeans, scuffed work boots and green hoodies, initially seemed less interested in Milne than in their gas-station cups of coffee.

The Republican office seeker had risen at 4 a.m. to discover it had snowed several inches, and the power was out at his Pomfret home. But he didn't want to lose out on Dave Markowski's offer to pitch his company's employees in lieu of their weekly staff safety meeting.

Milne, 57, told the workers almost apologetically that he would need 10 minutes of their time. He spoke softly for about five — dissing Leahy as a "career politician supported by special interests," vowing to press for term limits and stressing his moderate outlook. Then he took questions about term limits and campaign finance — two of his favorite topics — and the presidential race, which he usually avoids discussing. By the time he left, nearly everyone had grabbed one of his campaign fliers. Markowski and a few other guys took him out to breakfast at a nearby diner.

A nasty presidential contest and a close Vermont governor's race have kept the media occupied this election cycle. But even without the nonstop coverage, Milne likely wouldn't have attracted much attention with his low-key approach.

Much as he did in his first race for statewide office, which led to the surprise near upset of Gov. Peter Shumlin in 2014, Milne hasn't raised much money or hosted many campaign events. He has little establishment support and no paid staff.

Even those who mock him readily concede that Milne is a nice guy who could never be accused of political phoniness. But he is not a natural campaigner. Milne is more likely to wait for a voter to recognize and approach him than to step forward and introduce himself.

At times, his campaign resembles some kind of performance art.

Last summer Milne, like many office-seekers, marched in town parades. But he paraded with no entourage, campaign signs or literature — nothing to identify himself as anything but a random middle-aged dude walking down the road alone.

He has spent countless campaign hours holding solo roadside vigils clasping a campaign sign. On a recent Friday night, Milne stood at Dorset Street and Kennedy Drive in South Burlington. A passing driver recognized him, stopped and rolled down a window to take a picture. After a few awkward moments, Milne looked over, gave the driver a thumbs-up and said, "Hey, how's it going?"

"Hey, how you doing?" the driver answered, and then hit the gas. During the exchange, Milne never volunteered his name or his opponent's.

The candidate defends his approach. "Running around with a fake entourage at parades, putting in a lot of work to appear strong — there's appearances and reality," Milne said. "I am 100 percent confident in our message and what we're trying to do. I like the way we're running it. I don't think we're leaving a lot of opportunity on the table."

He describes himself as a "moderate New England Republican" and calls U.S. Sen. Susan Collins, a centrist Republican from Maine, his ideological lodestar. Milne disavowed GOP presidential nominee Donald Trump only after the notorious "grab them by the..." tape was leaked. He says he is unsure who will get his vote for president but vows it will not be Trump or Democratic nominee Hillary Clinton.

Milne has a nerdy love of Vermont politics. His parents, Marion and Don, both served in the legislature. On the campaign trail, Milne name-drops George Aiken about as often as Clinton invokes President Barack Obama. The moderate Vermont Republican, Leahy's predecessor in the Senate, has been dead for more than 30 years.

Milne insists that 42-year Senate veteran Leahy is vulnerable for being what he calls a career politician with deep ties to special interests. He has mocked Leahy for ducking his proposals to hold more debates and to "mutually disarm" by agreeing to spend no more than $100 on their respective campaigns. 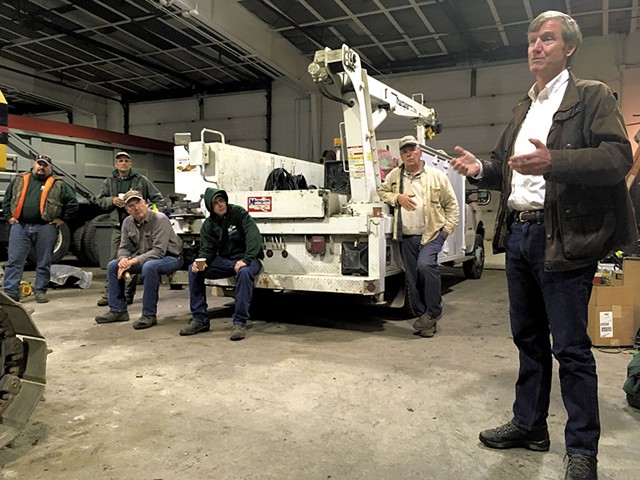 Milne has offered few policy specifics: He said he will serve only two terms and will propose a law, which he would name for Leahy, that any elected official who stays in office for longer would be required to surrender his or her public pension. He has also vowed to avoid special-interest money and to work as a pragmatist, not as a "partisan."

"The primary reason that our Senate is not working is because of this deadly concoction of special-interest money fueling career politicians, election cycle after election cycle," Milne said during a Vermont PBS debate last Thursday, later adding that Leahy is the "poster child" for the problem.

Leahy has criticized Milne for running a negative campaign and touted his own experience as a positive thing.

Although polls indicate that Milne is running far behind, his near victory over Shumlin suggests that Milne should not be underestimated. Voters appreciate his unorthodox style, Milne said, as much as the political class ridicules it.

"To some extent, having folks in the media mock me helped me a lot last time," Milne said. "Having somebody say negative things about you gives somebody else the opportunity to say, 'Well, I had a firsthand experience; I disagree with you.'"

Even though few in his own party took him seriously, Milne insists that 30 days before the 2014 election, he was confident he could beat Shumlin. This year, fewer than 30 days out, he feels even more confident, he said. That's after a Vermont Public Radio poll released in mid-October showed Leahy leading him 59 percent to 22 percent.

On the trail, Milne cuts a lonely figure. He has a staff of two: His daughter, Elise, who recently graduated from Vermont Law School, and his son, Keith, who takes one day a week off from his job as a financial manager at a New Hampshire investment firm to help his dad. Both volunteer their time. Neither has worked for any other political candidate.

Milne has raised less than $60,000 to Leahy's $4.7 million. He has foresworn PAC money and declined to hold any fundraisers or solicit donations by mail. Aside from money for signs and gas, he hasn't dug into his own fortune. (In 2014, he spent $80,000. He has since sold a 51 percent stake in his travel agency, Milne Travel, a company he said had $50 million in annual sales.)*

Of course, it's easier for a challenger who isn't getting big money to rail against it. But Milne insists he's not interested in that kind of fundraising.

"If the Koch brothers ... said, 'We're going to give you $1 million to run against Leahy,' if I could get that money, I don't know if I'd want the job," Milne said. "If we win, let's make sure we win in a way that optimizes our ability to do something, and not just be another rinky-dink senator. I want to come in with an ability to do something because of the way we did it in the campaigning."

He explains his strategy as "standing for election" instead of "running for election." Essentially, he will discuss the issues with anyone but won't go out of his way to try to garner attention. He did the same in the 2014 race for governor.

"Scott is approachable. I would characterize his approach as down-home folksiness which, to those who support him, are kind of endearing qualities," Sen. Joe Benning (R-Caledonia) said. "He certainly is different. It may be out of the mainstream, but it's just his style."

Before the PBS debate, Leahy huddled in the green room with a team of loyal political pros and his wife, Marcelle. Milne was in a tiny office with Elise and Keith. Seven Days popped in to ask Milne if he had any killer lines prepared.

When he arrived on the debate stage, Milne tried to shake hands with two perennial candidates: Cris Ericson of the U.S. Marijuana Party and Peter Diamondstone of the Liberty Union Party. Those candidates traditionally serve as colorful distractions during the PBS debates and would, as Milne knew, divert attention that he badly needed to score points against Leahy.

Ericson, who showed up without her trademark pirate hat, said: "I'm not shaking your hand. I'm trying to find ways to slam you."

Diamondstone accused him of being a "traitor" for backing Trump.

Milne gamely tried to explain that he would not vote for his party's nominee, then shuffled off to his podium and prepared to deliver lines that, he hoped, would help voters understand him.