Million-Dollar Question: How Much Should Nonprofit Hospital CEOs Earn? 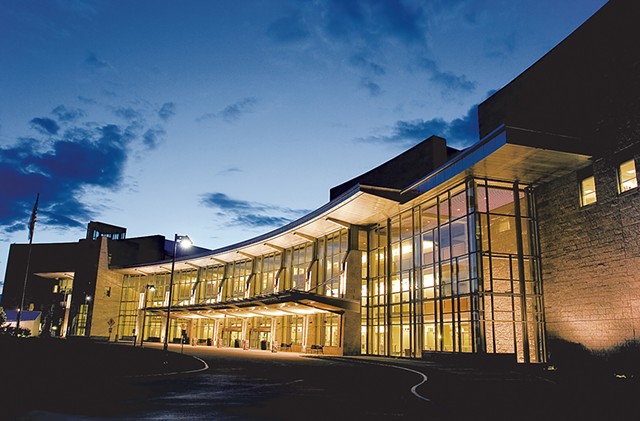 The average Vermonter makes about $50,000 a year. Executive directors of Vermont nonprofits make an average of $83,000, according to the group Common Good Vermont. Yet the heads of nonprofit hospitals in Vermont earn around $550,000 on average. Last year, the University of Vermont Medical Center CEO made more than $2 million.

Hospital board members say their executive pay is in line with competitors and makes up a small portion of their budget. But not everyone buys that defense.

"The public is struggling to pay for health care," said Sen. Chris Pearson (P/D-Chittenden). "To see that the CEO of our hospital is getting $2 million ... it's just way out of whack with the Vermont economy."

"It's just way out of whack with the Vermont economy." Sen. Chris Pearson tweet this

Kevin Mullin, the state's chief health care regulator, recently decided to spotlight the salaries of high-ranking employees at Vermont's 14 hospitals, which are all nonprofits. "I think it might be illuminating to the public," said Mullin, who has so far declined to weigh in on whether the pay levels are appropriate.

Mullin, a former state senator from Rutland appointed in late May to chair the Green Mountain Care Board, has been collecting compensation information from each hospital. On Monday evening, the GMCB published on its website a list of approximately 100 hospital employees who earned more than $400,000 in 2016.

Seven Days reviewed the documents that hospitals provided to the board. The federal tax forms, called 990s, require nonprofits to disclose compensation for their five highest-paid employees and up to 20 other key employees. Submitted to the Internal Revenue Service, the forms reflect figures from federal fiscal year 2016, which ran from October 2015 through September 2016.

UVM Medical Center is the state's largest hospital and the only academic one, so it's no surprise that executives there are the most highly paid. The Burlington hospital's Form 990 shows that John Brumsted, who has been CEO since 2011, made nearly $2.2 million during 2016. His salary was $979,064, but he took home more than twice that, thanks to bonuses and other payments.

That amount is up from nearly $1.7 million the year before. The medical center's board chair, Scottie Emery-Ginn, explained that the increase stemmed in part from a $340,000 retirement contribution, which Brumsted receives every three or four years. He also earned another $130,000 for exceeding performance targets.

Further down the list were the then-head of human resources, Paul Macuga ($548,356); the head of public relations, Theresa Alberghini DiPalma ($523,892); and five doctors, four of them anesthesiologists, who earned approximately $400,000 each. (Some doctors receive additional compensation from UVM's College of Medicine.)

How can a nonprofit hospital justify this kind of pay?

Emery-Ginn has a ready answer: "Our health care professionals come from a national market ... In order for us to get the best people and keep the best people, we need to pay competitively."

She also noted that they preside over a large and complicated organization. The UVM Medical Center has about 7,500 employees and collects nearly $1.3 billion in annual revenue; many of its top executives also oversee five other hospitals affiliated with the medical center.

Emery-Ginn cited a 2016 study as evidence that the hospital's well-paid leaders are worth their keep. The health care services company Vizient ranked the hospital nationally as the 13th best academic medical center for quality of care.

There are no clear rules that dictate how much nonprofits can pay employees. The IRS requires only that compensation be "reasonable," which has been interpreted to mean comparable to similar organizations.

UVM Medical Center has a method to meet this standard. Each year, a compensation committee made up of members of the board of trustees hires a consultant to research what competitors — Duke Health and Vanderbilt University Medical Center, for example — are paying. Using that information, the committee sets salaries right at the midpoint, Emery-Ginn said, because "we don't want the salaries to get any higher than they need to."

Salary, however, is often just part of the package. Emery-Ginn said the board doesn't allow an employee's total compensation, including bonuses, to exceed the 65th percentile, meaning the payment must be lower than what's provided at 35 percent of similar hospitals. The board rewards employees for meeting or exceeding benchmarks in three categories — quality of care, finances and operations — and Emery-Ginn said Brumsted exceeded every goal in 2016.

At some Vermont hospitals, CEOs weren't the highest-paid employees. A doctor held that distinction at the North Country Hospital in Newport, where CEO Claudio Fort made $417,940 while S. Glen Neale, an orthopedic surgeon, made $703,860.

Vermont's hospitals aren't outliers. A Wall Street Journal analysis of Form 990s found that, in 2014, 2,700 nonprofits provided seven-figure compensation packages, and three-quarters of those organizations worked in the health care sector. The president of one hospital network earned $17.6 million that year. Unions in Arizona and California have waged unsuccessful campaigns to cap hospital CEO compensation at $450,000.

Concern about executive pay factors into a larger debate about the cost of medical care. The United States spends $3 trillion annually on health care — more than any other country — and administrative costs gobble up 20 to 30 percent of that sum.

Hospital representatives concede that executive pay is a factor, but only a small one — it makes up 1.4 percent of UVM Medical Center's budget, according to spokesperson Michael Carrese.

Pearson sees other repercussions: "When you have public-relations people at the state's largest nonprofit hospital making half a million a year, it undermines confidence in the entire system."

It also runs the risk of stoking resentment within the hospital.

"It's difficult to hear those numbers as a nurse," said Maggie Belensz, who works on UVM's neurological unit. Referring to the CEO position, Belensz said, "I know it's probably a hard job, but holy crap, it must be some miracle job,"

Laurie Aunchman is a nurse at UVM Medical Center and president of Vermont Federation of Nurses & Health Professionals, a health care union. She acknowledged the need to pay competitively but said the hospital should balance "offering someone a million dollars or 2 million dollars" with investing money in "taking care of the patient."

"We think it's an ethical issue," said Mari Cordes, a UVM nurse and health care activist. "That excess money could be used to improve access to health care for everyone in Vermont ... It could be used to provide support for people actually providing the frontline high-quality care."

It's unlikely that the Green Mountain Care Board will try to influence pay levels at hospitals.

The Vermont legislature gave the board the power to approve or reject hospital budgets, with the goal of controlling health care costs. Mullin asked for the salary information just as the board was beginning its review of proposed 2018 budgets.

"I don't think that the salaries are going to have any role in determining whether or not the hospital budgets are reasonable," he said. "It's just as a way of being open and transparent ... It's not like the board has any intention of trying to dictate what salaries will be." (Mullin's predecessor, Al Gobeille, suggested that weighing in on salary levels would be "micromanaging.")

The Form 990s are public documents, though it often takes at least several months for them to be posted on the website GuideStar, which compiles data about nonprofits. The high salaries that the board published on its website are sure to get at least some notice.

Even so, the information isn't a current snapshot — the data are now a year old — nor is it a complete picture. Since the institutions only have to supply information for about two dozen people, there's no way of knowing whether the total number of people earning six figures — or more — is rising.

Don't expect hospitals to volunteer that information. "I would say we're not eager to share," said Emery-Ginn. "I think it's uncomfortable for these people to have their salaries be [subject to] public discussion."

"It ought to make hospital leaders uncomfortable to be paying those exorbitant salaries," Pearson responded. "Our hospitals are basically public institutions ... They are quick to protect themselves as private institutions, but the fact of the matter is, a great majority of their money comes from public dollars."