Mill River Brewery, Plus BBQ, to Open in St. Albans 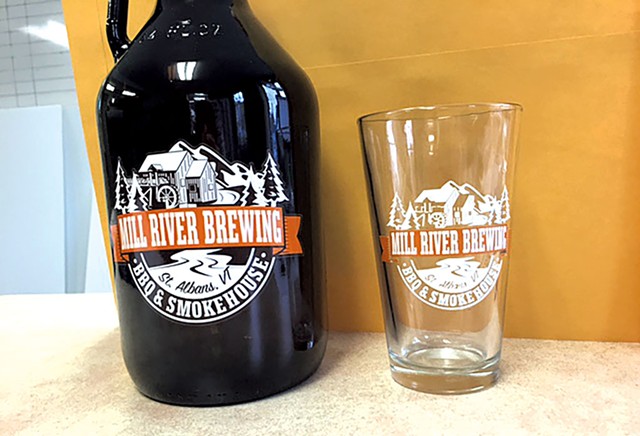 The new business will move into a former Hands On Car Wash site at 10 Beauregard Drive this December. It's the brainchild of a family team: brothers Dan and David Fitzgerald will run the brewing side, while Joyce Fitzgerald, David's wife, will be the primary owner and driving force behind the brewery's 48-plus-seat barbecue restaurant.

David and Dan got into brewing in 2013, they say, after an all-grain brewing seminar at Craft Beer Cellar in Waterbury. A member of a family of professional caterers, Joyce was already well versed in food production; that same year, she began cultivating her interests in barbecue and smoking.

"When the guys and I started talking about a brewery, we knew we wanted to have food in the mix," she says. "Partly for responsibility's sake, partly because food is a gathering place."

Mill River Brewing will start with a seven-barrel brewing system, with growler fills and on-site pints to go with Joyce's smoked ribs and brisket. The cozy post-and-beam spot will have bar seats and tables, plus an attached sit-down barbecue restaurant and a seasonal 50-seat biergarten.

David also trains ice cream makers at Ben & Jerry's; one of the biggest similarities between crafting Chubby Hubby and Mill River beer, he notes, is both businesses' attention to environmental responsibilities.

"We collect all rinse water and spent grains," he says. The brewery then trades the resulting feed to two area farms, Vermont Organics Reclamation in St. Albans and Jones Family Farm in Hyde Park, in exchange for local vegetables, beef and pork for the smoker.

The trio hopes to grow more produce, including hops, in raised beds in the green space around the brewery and restaurant. The goal, says Joyce, is to keep as many ingredients from Vermont, specifically from St. Albans, as possible.

"We'd love to see St. Albans be that next spot, like Pine Street [in Burlington] or Waterbury," David says, referring to the burgeoning brewpub scenes in both. "Absolutely, St. Albans can handle it."