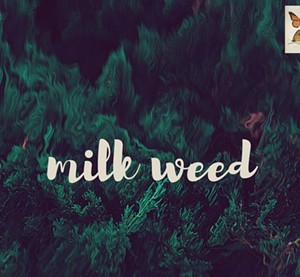 I've been lucky to maintain most of my important childhood friendships. But I didn't fully appreciate them until I realized that most adults didn't have lifelong connections like I did. So, I have a soft spot for circles of grown-up friends who've been together since youth, including new Colorado-Vermont band Milk Weed.

The trio of Denver-based singer-songwriter Michael Wood and Burlington-based married couple Mitchell and Sarah Manacek released a self-titled debut EP on January 27. The three came of age together as young musicians in the Chicago suburbs, but this is their first official release as a unit. Conceived and executed remotely during the pandemic, Milk Weed is a four-song indie-pop EP fueled by the kind of big, uncomplicated emotions we feel as kids.

Wood, the group's primary vocalist, keyboardist and creative mastermind, also served as the project's producer and engineer. Mitchell, known for his work in Queen City indie bands the Bubs and Bleach Day, adds guitar, bass and additional synth throughout, while Sarah takes her first-ever turn as a vocalist. The band members sound calibrated and equalized across the EP's brief, 16-minute run time, as one might expect from folks who've been in each other's lives as long as these three have.

Wood is likely a fan of the Flaming Lips and, whether consciously or not, pays homage to front person Wayne Coyne, who's known for intensely melancholy vocalizations. In fact, Milk Weed wholly aspires to the suspended-in-low-Earth-orbit atmosphere of the Lips' early albums, as well as Coyne's often childlike phrasing and general outlook.

Themes of childhood, innocence, playfulness, secrecy and, ultimately, angst run parallel to the grand whimsy of Wood's songwriting and the group's compositions. The primarily piano-led tunes amble with an intentional sense of precariousness, like a toddler who's been walking for only a few months. The newly bipedal child feels unstoppable, despite a little insecurity in every step.

Milk Weed hurtles forward with that confidence, beginning with opener "On the See Saw." The track unambiguously sets up the running childhood theme with lyrics that flash like retro photos dug out of a box in the attic. Mitchell's guitar swoops underneath Wood's sauntering piano like safety netting, supporting and enhancing the mainline melody.

"Milkweed" cruises with a similar vibe. Ribbons of guitar billow between reverb-y piano chords, and simmering tropical percussion heats up to a rock-and-roll boil.

Instrumental "The National Parade" is a bit of an outlier, leaning into an almost industrial groove with metalwork synths and darkened ambience. But the fog clears on closer "Use a Stencil," on which Wood's and Sarah's vocals find their most promising union.

Milk Weed is a brief introduction to concepts — and a lineup — deserving of further exploration. The EP underscores that a chosen family can be as strong as a biological one.

Milk Weed is available at milkweed2.bandcamp.com and on Spotify.