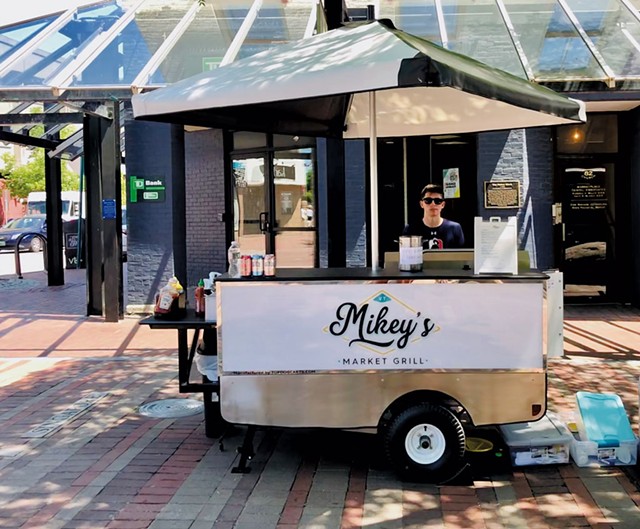 The food cart, parked in front of the TD Bank ATM at the corner of Church and Bank streets, made its first appearance last Friday. It's owned and operated by Michael DiMaggio, whose menu includes five varieties of gourmet burger, three different grilled-cheese options and a jumbo grilled hot dog. Prices range from $4 to $10, and each item comes with a side of chips.

"I want this to be a place people can rely on to get an affordable lunch during the week," DiMaggio said.

DiMaggio started cooking on the flattop at Bessery's Butcher Shoppe & Delicatessen on North Avenue when he was a junior at Burlington High School. In the three years since, he has also worked the late-night shift at several food carts downtown. "I love the energy downtown, and I love being outside," he said.

Mikey's Market Grill is parked in a historic spot in the timeline of Church Street food carts; it was previously occupied by Boo-Kies and Momos by Sherpa. "They were both Church Street staples," DiMaggio said, "and I'm trying to become a staple myself."