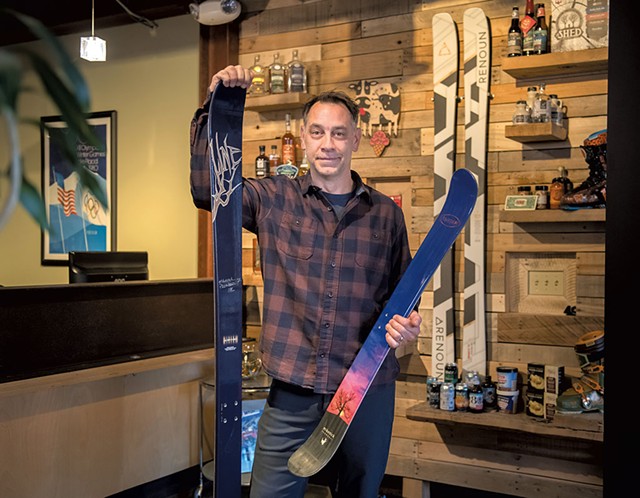 Mike Nick, a winter X Games gold medalist in 1998, can't remember the last time his feet were over his head on a pair of skis. But the 46-year-old Essex Junction resident has a vivid memory of the winter more than 25 years ago when he taught himself to ski backward — fast and with style.

Nick was a college kid on the slopes at Stratton Mountain, skiing on a pair of skis developed by his friend, J Levinthal, in a garage near Albany, N.Y. Called skiboards, the skis were short and wide and had upturned tips in the front and back. The twin-tip design allowed a skier to go forward or backward out of a jump or down the slope, similar to snowboarding. (Learn more about Levinthal and his skiboards in "Snow Angles.")

For Nick, a natural and daring athlete, the design was an invitation and a challenge to experiment, up his level of tricks and soar higher above the snow.

"For me, as an athlete, it was always [about] building blocks," he said. "Learn the spin. Learn the flips. Then give it a rip and see how it goes."

Skiing backward — facing uphill — would become a foundation for some of Nick's airborne moves and helped him win the gold. He pioneered tricks on skis that led to additional medals and pro sponsorships. He credits these early days of creativity and innovation with shaping not only the sport but also his career.

"I've never had a job interview," he said. "We always started our own thing."

Nick discovered that skiing backward worked best if he carved his way down the slope. He demonstrated the optimal technique for Seven Days with a pair of butter knives as tiny skis, moving them in parallel sync with one knife slightly leading the other. (He ruled out a backward snowplow because it was athletically and aesthetically inferior.)

"When you come blowing by someone going faster than them, looking uphill, it was the greatest," Nick said, laughing.

Decades later, he still isn't sure how his skiing exploits landed him an invitation from ESPN to compete in the 1998 winter X Games, a high-profile extreme-sport competition. It could have been the 1080 — aka three-rotation spin — that he nailed at a summer ski camp at Whistler Mountain in British Columbia, he suggested. Or maybe some free-skiing action videos of Nick and Levinthal impressed ESPN execs. But somehow, the alpine duo, friends from their hometown of Guilderland, N.Y., were both invited to compete.

Held in Crested Butte, Colo., the second winter X Games was the first to include a slope-style skiing event, which features tricks on jumps and rails in a terrain park. Nick won the gold; Levinthal took the bronze.

"That was cool," Nick said. "Two guys from this area: You never thought you'd end up on the world's biggest stage."

Levinthal's skis made a mark, too. "Skiboards were the tools that broke the wall down for twin-tip skis," Nick explained. By 2000, he said, he was transitioning to full-length twin-tip skis from LINE, Levinthal's brand at the time.

The friends' success was based on applying elements of a variety of sports — including skateboarding, snowboarding and in-line skating — to skiing, Nick said. He would go on to win silver medals at the winter X Games in 1999 and 2000.

"He's a legend for sure," Levinthal said of Nick. "He would do things that were never done on skis. He was like a cat; he always lands on his feet."

The two grew up together skateboarding, skiing and snowboarding, along with Levinthal's brothers. Photos of a young Nick on his website show him mastering daredevil moves on a skateboard and upside down in his driveway. When the boys were old enough to drive, they headed to the slopes at Stratton and Mount Snow.

They recalled getting kicked out of snowboard parks for wearing skis and not being allowed on skiers' chairlifts with their snowboards. It was the 1980s, during the so-called "cold war" between snowboarders and skiers. The budding medalists and their friends competed on both sides of the downhill conflict.

"No one thought skiers had a reason to be in snowboard parks," Nick said. "But we'd poach our way in."

A high point of those teen years was skiing the bumps on an ungroomed trail at Mount Snow, Nick recalled. Metallica or Bob Marley would blast from speakers mounted on the chairlift towers as he tore down the hill, aiming for bumps and big air.

"It was a party," one without rules, Nick said. "It was like playing Sunday night football. You were either going to be looking awesome, or you were gonna get heckled."

His X Games gold, as well as his athleticism, creativity and dedication to the sport, led to working as a pro skier for about six years, starting in 1998. A member of the first LINE ski team, Nick was a sponsored athlete who represented the brand at competitions and in skiing movies. He also ran ski camps for kids.

"Mike would invent and pioneer first tricks on skis," Levinthal said. "He had a high skill level — natural athletic ability — and he was creative."

But Nick was aware that an athlete's career slows with age, so he built another ski-related profession. In 1999, he and childhood friend Doug Levinthal — J's younger brother — created and launched Siver Cartel, a clothing line named for the street he grew up on. The clothes were baggier than standard skiwear.

"Ski clothes were tight and nerdy. You looked like a dad," Nick said. "You don't want to be like your dad when you're 13."

"It was just trying to design cool stuff that those guys wanted," Splonskowski, 45, said. "I remember I designed the pocket of a jacket that had the ability to hold CDs and a portable CD player. That tells you right there how young we were." 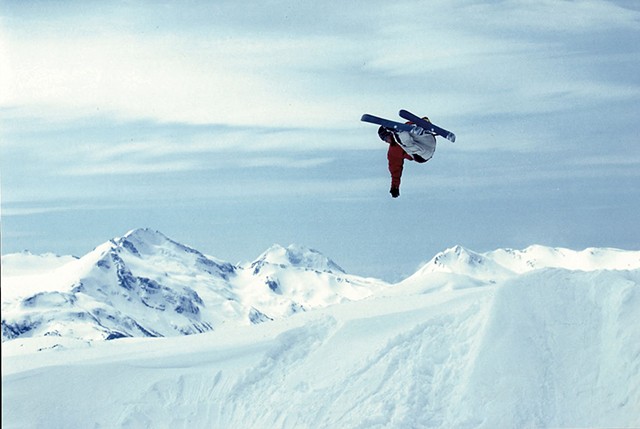 Siver Cartel would eventually merge with Orage, a Montréal-based outerwear company. Nick ran the marketing division at Orage until 2015; he still wears its gear and skis on J Skis, Levinthal's current brand.

"I'm pretty loyal to the brands that supported me," he said. "I've been skiing on Jason Levinthal's skis since 1995. They're great."

For the past eight years, Nick has been a marketing strategist with Four Nine Design. The Burlington-based company, cofounded by Splonskowski in 2006, started as a graphic and web design firm. With Nick as a minority partner, Four Nine has expanded its services to include marketing and branding.

"Mike's a very passionate person," Splonskowski said, noting that he has a knack for marketing. "Whatever he takes on, he takes on with full motivation."

Nick said he recognizes parallels between his approach to skiing and his marketing work. With both endeavors, he values creativity and authenticity.

"It's a sport, but there's an innovative, creative element," he said of skiing. "It's the same thing with my day job: How can you be unique and stand out from the rest of the pack?"

One example is a men's soccer league he started in 2017, Elite 8 Soccer League, in which eight players (not the usual 11) compete against each other on a smaller field. The fast-paced game gives older players a chance to touch the ball more than they might on a full-size field with 11 players, Nick said.

Years after his backward skiing days at Stratton, the pack has caught up with Nick. On his first run of the season, he always goes down the mountain backward. These days, he's not the only skier facing uphill.