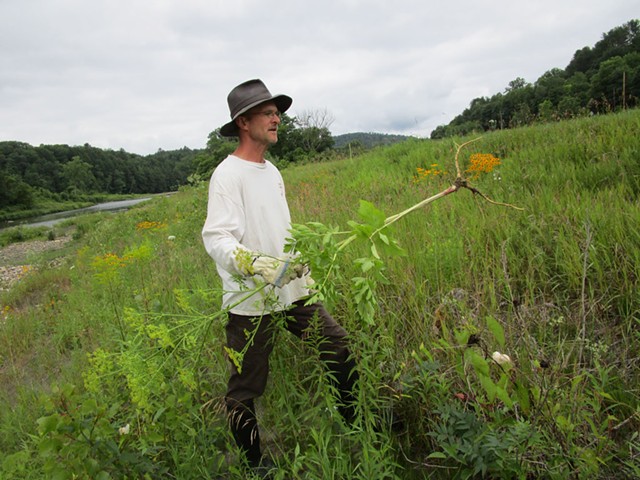 Mike Bald tries not to use war terminology to describe his work of invasive plant removal. It's a resolution made difficult by the sheer magnitude of the task he faces. Royalton-based Bald spends his days crisscrossing the state digging, chopping and pulling myriad nonnative species: Japanese knotweed, chervil, giant hogweed, Japanese barberry and, for now, lots of wild parsnip.

"I wake up every day heavily outnumbered," he says. "Every night, I'm the last one standing."

Bald sits on the tailgate of his pickup truck, exchanging his Birkenstocks for rubber work boots, and talks with a reporter. The 50-year-old is wiry, with a boyish confidence and the unquenchable energy necessary for someone who works dawn to dusk removing the state's most persistent plants.

Bald is the sole proprietor of GotWeeds?, which he established in 2011 to perform organic removal of nonnative species. Private landowners, businesses and municipalities contract him to survey a site, determine tactics and approach, and return each year to remove the undesirable plants manually.

Still, he doesn't refer to his work sites as battlefields.

"It's not about good plants or bad plants. It's not about war," he says. "I want to make people appreciate that landscapes are healthiest and most resilient when they have strong biodiversity."

Bald currently has 50 clients, including King Arthur Flour, Stowe Land Trust, the Town of East Montpelier, Randolph Area Community Development Corporation, the Lake Champlain Land Trust and many private landowners in Vermont, as well as half a dozen sites in New Hampshire and a few in Massachusetts.

Some two dozen harmful invasive plants are establishing themselves across the state, according to the Vermont Department of Forests, Parks and Recreation. Elizabeth Spinney, the invasive plant coordinator with the department, says she can't quantify the geographic area affected by those species. But she can point to the environmental effects: Buckthorn is so prevalent across the southern Champlain Valley, she says, that "you almost don't have a functioning forest." Chervil, once thought to grow along the edges of fields, is now present in Green Mountain National Forest.

For his part, Bald divides the state into three geographic sections: North of Interstate 89, he says, invasives can be conquered with the deployment of early detection strategies. Between Route 4 and I-89 lies what he calls "the current hot zone" — where invasives can be controlled with prompt, thorough work. South of Route 4, invasive populations are extensive enough to require a long-term plan to contain, rather than eradicate, the plants.

Bald believes he's the only individual in Vermont whose primary vocation and mission is organic plant control.

"Lots of people do invasive species work," he clarifies. "But apparently no one has ever pulled it all together and quantified it in meaningful ways." He approaches his work scientifically, analyzing the terrain and environment at a site and tracking his methodology and progress in a spreadsheet.

What's more, he's turned the task into paid employment. "That's where perhaps I'm unique," Bald says, "trying to demonstrate just exactly what it costs in dollars and time to get either an eradication or an effective containment."

His personal best is 4,970 parsnip plants pulled in nine hours at a Brownsville Christmas tree farm. tweet this

Bald, a Philadelphia native, found his calling via a circuitous route. After earning a biology degree from the University of Notre Dame in 1988, he served four years in the Army; he was a combat engineer in Germany, determining positioning and plan of attack for U.S. troops as they helped facilitate the fall of the Berlin Wall. Bald credits the army with teaching him "how to look at terrain" and "where and how to fight the battle," he says.

He studied three semesters in Germany after his service, then returned to the U.S. to marry and have two sons. (He has since divorced.)

All told, Bald has lived in 23 places and held an assortment of occupations, including travel agent, firefighter and stay-at-home dad. He began to work with invasive plants when he joined the U.S. Forest Service in Vermont in 2002, managing riverbank habitat and patrolling the White River for trout. It wasn't until 2010 that Bald started contemplating self-employment, after he asked the Nature Conservancy of Vermont for its notes on a five-year project to remove Japanese knotweed.

There were no notes. No one had visited the site for the final two years of the project.

Initially he distributed business cards at area farmers markets and sold T-shirts emblazoned with the words "Got Weeds? Get Mike." He established a website and blog. These days, Bald gets most of his clients by word of mouth. Though business was slow in the beginning, he now has as many clients as he can handle.

Bald charges between $295 and $350 per day, based on the risk involved. A full day of eradicating wild parsnip on a site that also has poison ivy and barbed wire, for example, would cost a landowner more than a Japanese knotweed infestation. When Bald arrives at a site, he considers tactics, such as halting plant expansion at "gates and choke points." From there, his work is all manual — digging or pulling or cutting the plants. He uses no herbicides or chemicals.

Initially, Bald visits a site up to a dozen times a year, then cuts back his visits as he gains control. He disposes of uprooted plants in the road — root-first, to prevent seed dispersal — or simply piles them on the ground to dry. Even if they re-root, he'll pull them easily.

Bald says he's still frustrated by what he sees as a lack of governmental efforts to limit the spread of invasives. Virtually no state money is allocated to control terrestrial plants beyond what goes toward work done on state land, confirms Spinney. Furthermore, when landowners call state workers or agencies for help with a problem with nonnative plants, they're transferred to the Vermont branch of the U.S. Department of Agriculture.

It's possible to get federal money to manage invasives on private land, Spinney says, though she notes that government contractors use herbicides.

"In Vermont, there's some good energy but a lot of antiquated mind-sets, a lot of inertia," Bald charges.

Getting rid of invasives requires dedication and plenty of manual labor, he adds. Bald works seven days a week, often until eight in the evening, from early March until the ground freezes in mid-December. In February he prunes apple trees, and he takes January off as his "month of healing," he says.

Bald works alone, rain or shine. "It's fun. It's crazy fun. I love it," he says with a nonchalant shrug.

He is also meticulous. Bald keeps track of the plants he pulls, logging the results in a vast spreadsheet. He averages between 2,000 and 3,000 pulls a day — though his personal best is 4,970 parsnip plants in nine hours at a Brownsville Christmas tree farm.

Bald dresses carefully to avoid mishaps on the job: loose pants and T-shirt to shield him from heat and wasp stings, rubber gloves (leather can retain poison ivy oil), a hat and, under it, a bandana that falls loosely along his neck to deter bugs. His rubber boots protect him from thorns, poisons and irritants. Exposure to wild parsnip and sunlight causes blistering burns, chervil can irritate the skin, and many of his work sites contain poison ivy.

In the cab, Bald always keeps a copy or two of The World According to Monsanto: Pollution, Corruption and the Control of Our Food Supply by Marie-Monique Robin. The book is his bible and manifesto, fueling his passion for biodiversity and his distrust of corporate food.

One Friday morning, Bald walks to a site a quarter mile down the road from his Royalton home. He became friends with landowner Sue Cain after he saved her chicken coop by lashing the structure to a tree during Tropical Storm Irene.

The following year, Cain, 76, hired Bald to remove the Japanese knotweed that the flooding had swept up onto the bank. She had worked to fend off the chervil previously, but, "I'll be honest, it was intimidating," she says. Cain was one of Bald's first clients.

Now, after five years, the 75-foot stretch of riverbank is clean, its rocky beach giving way to grasses, black-eyed Susans and daisies.

Bald used to come here eight to 10 times a year. Now he patrols the land only a couple of times in the summer, pulling small Japanese knotweed plants and the occasional parsnip.

"I saw that he had the dedication to do what he had in his head to do," Cain says of her decision to hire him. "It seems like it's paid off."

Despite his successes, Bald has no employees to expand his business; he hasn't been able to find "anyone who can make it past lunchtime," he laments.

He isn't worried, though, basing his succession plan on educating not an individual but the public at large. Toward that end, Bald continues to teach and build public engagement. He lobbies in the Statehouse on environmental issues and on behalf of local farmers, and gives occasional talks to the public.

"I'm trying to remove some of the hopelessness," he says.

Oddly enough, Bald has a lingering affection for the plants he tries so hard to kill. He's currently pressing and drying a giant hogweed leaf in his attic — and plans, one day, to transform it and other pressed invasives into an art display.