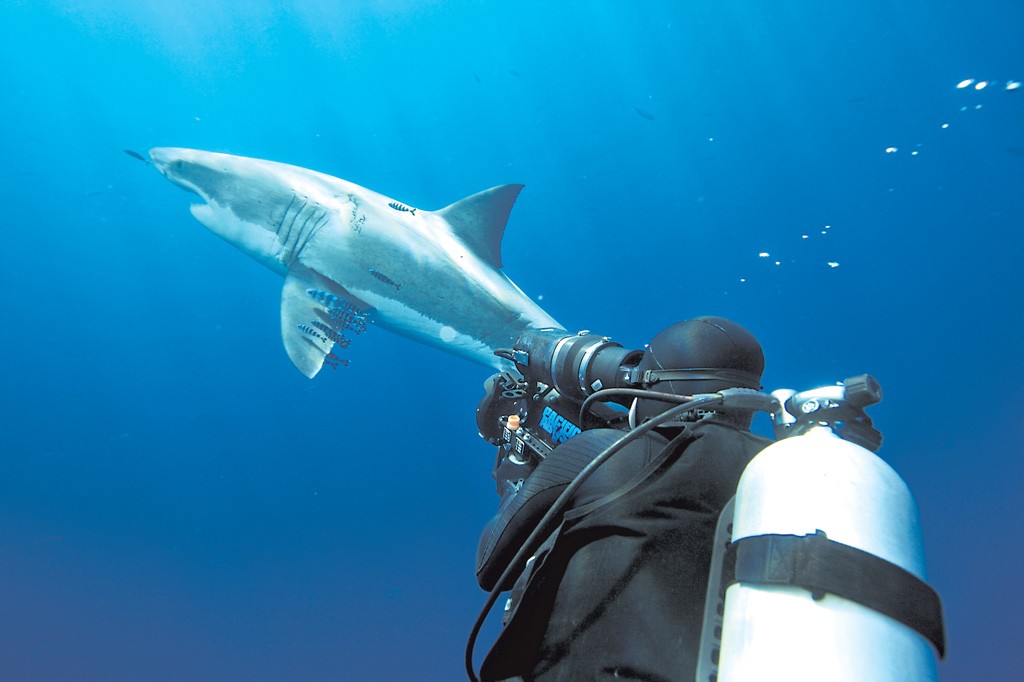 Sharks, according to Andy Mitchell, are "kind of sexy." He would know better than most people: The Middlebury resident and longtime National Geographic wildlife cinematographer regularly dove headfirst into shark-infested waters for his job. One time, "I had to jump out of a helicopter into a shark feeding frenzy," he reveals. "But I'm going to save most of the juicy ones for the show."

That show is "Sharks" — the first presentation in a new lecture and event series called Middlebury Underground Discussions, or MUD Talks. Mitchell and his wife, Lisa, an event planner, aim to "train generations of local explorers" through fun, out-of-the-box events that also delve into meaty issues in an intimate community setting.

"Sharks" will take place at Middlebury's Town Hall Theater on Sunday, November 30. Mitchell and Andy Brandy Casagrande IV, both Emmy Award-winning cinematographers, will discuss their work and offer nine shark films the two made together. Audience members can select from them — "like Choose Your Own Adventure," Mitchell says — depending on what they'd like to learn. The event benefits Middlebury's Bridge School, which the Mitchells' son attends.

While those films include the aforementioned "juicy" and hair-raising action scenes, Mitchell says the point of the evening is "not to show gratuitous film clips about sharks." Rather, it's to prompt a discussion on the ethics of wildlife filmmaking and to "pull back the veil" on Shark Week, the popular annual Discovery Channel block of programming for which Mitchell and Casagrande have both worked.

"Even though we want to have fun, we also want to broaden people's knowledge base a little bit," Mitchell says. He notes that the species is fighting for survival; millions of sharks are killed each year. The methods used to get those action-packed shots, Mitchell confesses, are not always the most ethical. "We really want to get across the conservation angle," he says.

Andy and Lisa Mitchell have been hosting quirky and creative evenings for friends and acquaintances in the area for years, including pop-up dinners with Warren-based "Phantom Chef" Matt Sargent, "middle-ager" raves and other events. "In Middlebury and in Vermont, we feel there's this creative movement," Andy Mitchell says. "Here, so many people we know are doing cool and interesting things that are off the beaten path."

MUD Talks are designed to bring that energy — and the engaging conversations that the Mitchells have observed during their smaller events — into the wider community. They started with "Sharks" because of the subject's broad appeal, and because it relates to Andy Mitchell's work. Future events will be diverse, though each will address a single topic.

The second MUD Talk is scheduled for February 27 and won't be a talk at all. It's a concert with Sierra Leone's Refugee All Stars. Andy Mitchell met the musicians a decade ago while working on a documentary film about them; at the time, they still lived in a refugee camp in Guinea. The group, now based in Providence, R.I., tours internationally and records on Vermont's Cumbancha label.

Given the recent Ebola outbreak in West Africa, the second MUD Talk will fundraise to benefit the musicians' former communities. Mitchell's film — also called Sierra Leone's Refugee All Stars — will be screened, and the audience will enjoy "a good old-fashioned rock show," Mitchell promises.

"We plan to make each MUD Talk very distinct and unique," adds Lisa Mitchell, "with different and timely themes that are important to people in the local community and on the world stage."