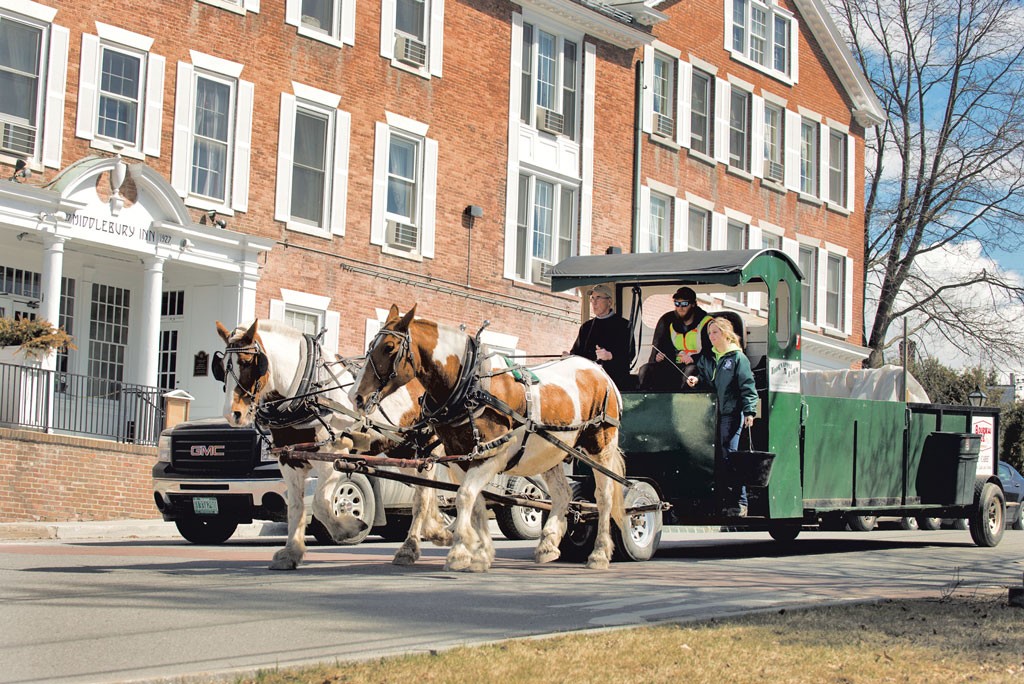 It's not every day that people get up early to catch a glimpse of a garbage truck, or that kids on a playground leap off their jungle gyms to wave at its drivers. But then, Pat Palmer, Nick Hammond and Amanda Morse are not your standard trash haulers, and theirs is not a normal garbage truck.

In its second week of hauling trash and recycling in Middlebury, Draft Trash is already a local sensation, eliciting smiles and greetings from customers and passersby. Most of the attention is directed at Pete and Paul, the two guys who do most of the work: The 1,500-pound brothers are both 15-year-old, 16-hand-tall spotted draft horses. Twice a week, they pull a 29-foot trash wagon through the town.

This may be the first time in many decades that horses have hauled trash in Middlebury, but the phenomenon is not new to Addison County. Palmer and his wife, Cathy, have used draft horses to pick up trash in Bristol for 18 years; the wagon is theirs. The horses belong to Hammond, 28, who also employs them for farm work and hayrides. Now, one hoof-step at a time, Draft Trash is expanding, using old ways to meet another town's needs.

Draft Trash's three partners need two days to collect about 40 bags of trash and another 40 bags of material for recycling. Palmer, 68, estimated that the horses clomp along at about four miles per hour, slowly enough for the crew to hop on and off safely. As Hammond said, "We're our own advertising." The very sight of a horse-drawn wagon poking its way through town is enough to attract new clients.

The idea of using draft horses for trash pickup came to Palmer years ago when he read an article by a man with a similar business. "He wrote about how economical it was, and I thought, Oh, what a great idea," Palmer recalled. "Just about the same time, a new town manager moved into Bristol. The town road crew used to pick up trash with trucks there. We did it twice just to see if we could do it; then we put in a bid against three other people and won the bid."

Just a week before Seven Days hopped on board, Palmer had surgery to implant a stent, and his doctors told him to avoid physical labor. For most of the route, he drove the team from a seated position, but this stubborn Vermonter got up once to toss a bag into the back.

Morse, who's just 20 but has been working with the Palmers' horses for a decade, hollered her objection. "Pat, don't! Don't you dare!" she yelled as she darted around the wagon. She beat Palmer to the trash can and ordered him back to his seat. 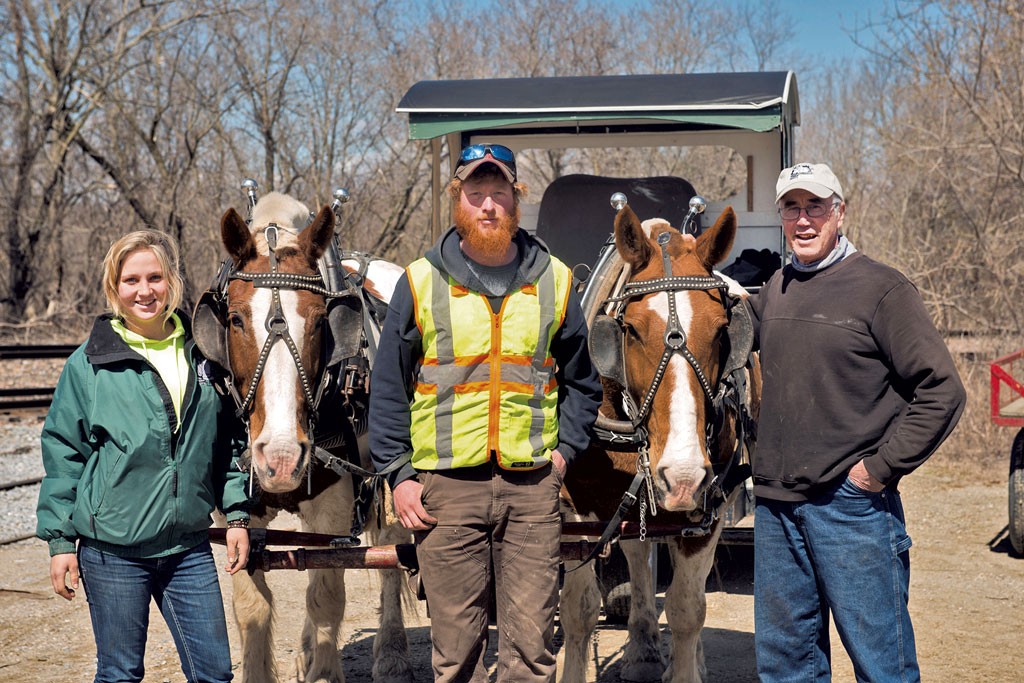 The company's pickup follows a simple procedure. Its customers purchase stickers at $5 each and affix them to their bags. Crew members toss trash bags as-is into one compartment in the wagon; recycling bags are slit open and their contents dumped into the other. When the wagon is full, the team proceeds to the transfer station on Route 7, where they get in the offload line with other haulers. Draft Trash pays $123 per ton to unload, which, Palmer said, averages out to a per-bag fee of about $1.23.

Teresa Kuczynski, district manager of the Addison County Solid Waste Management District, said that district officials initially were concerned about the horses' welfare. Would the horses be OK, they worried, with "sharing our facility with very large trucks that make a lot of noise"? The concerns vanished when ACSWMD reps witnessed Pete and Paul's laid-back demeanor. "The horses seemed very calm and disciplined," Kuczynski said. "It wasn't a problem."

Why haul trash this way at all? Palmer explained his logic: "It's not really faster with a truck. If there's a lot of hazards, you have to stop the truck, jump out, pick the trash up and drive ahead. For another thing," he continued, "this is a lot more fun, and it's a lot cheaper. A trash truck is around $150,000, and its average lifespan is 10 years. This [wagon] I built for $3,000, and I've had it 17 and a half years."

"And you don't have to pay for fuel," Hammond added.

"Not what you don't already have to feed them, anyway," said Morse.

In a flier that the Draft Trash owners delivered door-to-door to prospective customers in Middlebury, they tout their method's environmental friendliness and noiselessness and guarantee not to add a fuel surcharge. While it's true that the wagon makes less noise than a squealing, beeping truck, these solid-waste haulers produce their own solid waste. The only thing that slows down the wagon is the prodigious pooping of Pete and Paul.

The crew is quick on the draw, though. The moment a road apple is released, crew members grab the onboard shovel, broom and bucket to make quick work of the mess. Any remaining debris is less toxic than leaked motor oil.

Draft Trash isn't the only trash-hauling newcomer in Middlebury. According to Kuczynski, eight haulers are licensed to do business there, an unusual situation occasioned by two statutes: one statewide, one local.

The state legislature passed Vermont's Universal Recycling Law (better known as Act 148) in 2012; it will go into effect on July 1 of this year. One of its key stipulations is that every licensed waste hauler must pick up recycling at no additional cost. Act 148's passage opened the door for small companies to enter the trash-hauling business, Kuczynski said.

The law also prodded Middlebury to change its trash collection procedure. Beth Dow, assistant to the town manager, explained that the town had had a contract since the early 1990s with Rutland-based Casella Waste Systems, the largest trash hauler in the state. That contract was set to expire around the time of Act 148's enactment, so town officials formed a committee to discuss options.

Local customers, said Dow, "wanted the ability to choose their own recycler. The contract was set up [so] that, if they did that, they still had to pay Casella." The committee successfully recommended that town officials not renew the Casella contract and, instead, allow hauling to be handled at the consumer level. So, on March 31, Middlebury removed itself from the equation of municipal waste collection.

While mega-hauler Casella no longer has a municipal contract, its trucks still pick up trash and recycling from about 800 Middlebury customers, according to general manager Randall Dapron. That makes Casella's local customer base about 20 times larger than that of Draft Trash.

Dapron is unfazed by the hoofed competition. "There are already other companies in Middlebury that we compete with every day," he said. "This isn't anything new. It's just business."

Casella and the other licensed haulers in Middlebury are "traditional" in that they use trucks. But then, what's more traditional than using draft horses for heavy labor?

That old-timey appeal was a selling point for customer Susan Keniston. Standing on the curb to chat with the team on the wagon, she explained her reasons for going with Draft Trash. "There are no emissions," Keniston said, "and the price is good. And the horses are beautiful, and I love the sound of them coming down the street."

The original print version of this article was headlined "Horse Sense"