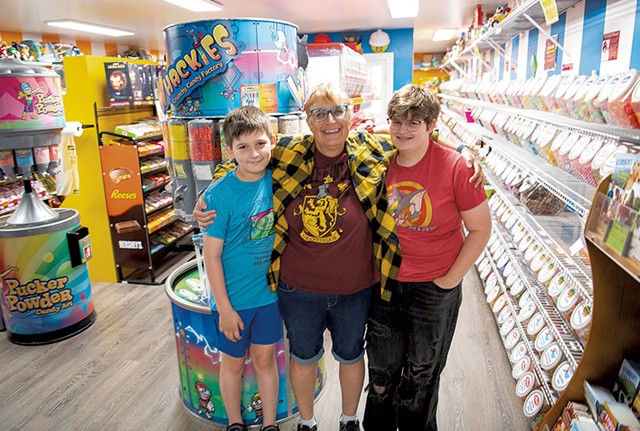 "We cater to the kid in you," reads the sign outside a rather unassuming orange motel at 1395 Route 7 in Middlebury. Once inside, visitors instantly understand. It's a candy destination worthy of Willy Wonka: Two colorful rooms brim with chocolates, gummies, jelly beans and taffy.

Row upon row of shelving displays every candy imaginable, including 87 flavors of jelly beans, from birthday cake remix to chile mango; 67 varieties of gummies, from giant gummy fried eggs to gummy lobsters; and 52 types of taffy, from caramel corn to maple bacon. Even M&M's come in unusual color options, including teal and cream. 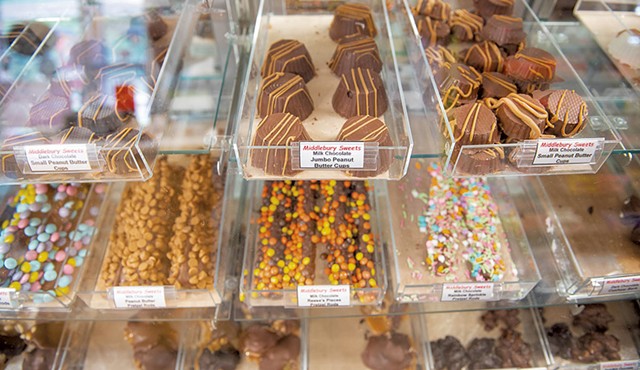 Blanca Jenne opened Middlebury Sweets 11 years ago, when she noticed that the two cases of candy in her scrapbook shop were selling faster than the scrapbook materials. At the time, her scrapbook-turned-candy shop was on Ossie Road in East Middlebury.

Her husband, Brad Jenne, owned a U-Haul and self-storage business in East Middlebury. In 2017, the couple decided a storefront on Route 7 would attract more visitors driving through Middlebury. They bought the old Greystone Motel to turn it into a combination motel and candy shop.

Brad suggested using a candy theme to decorate the motel rooms, Blanca said. "I kind of went nuts with it once he had the idea planted in my head," she told Seven Days.

Each of the nine rooms boasts candy-inspired pillows and framed prints and, of course, a dish of sweets on the bedside table. "[It is] subtly done, though," Blanca said. "Nothing over-the-top."

Even before the move to Route 7, she planned to make Middlebury Sweets a destination.

"We did the research and made sure we were the largest candy store in Vermont," she said. "That was our selling point."

She relies on eight distributors to get every flavor sold by companies such as Albanese in Indiana, Taffy Town in Utah and Jelly Belly in California. The store is filled with hundreds of small bins for dispensing each candy variety.

"When we go to sell something, we try to carry most if not all [the company] has — even the unusual ones that are harder to find," she said.

Blanca also sells candy made by South Burlington's Birnn Chocolates of Vermont and some treats she makes in the store. Hers include milk or dark chocolate creams, chocolate clusters, chocolate bark and peanut brittle.

The most popular of the housemade items, though, are the jumbo peanut butter cups. "[They are] way better than Reese's, at least I've been told by many. I think they are, too," she said with a laugh.

The shop attracts a mix of tourists and locals of all ages. Blanca's favorite part of running the store is watching adults peruse the aisles of candy.

"They are just as fun to watch as the kids," she said.

The original print version of this article was headlined "Sugar Rush"