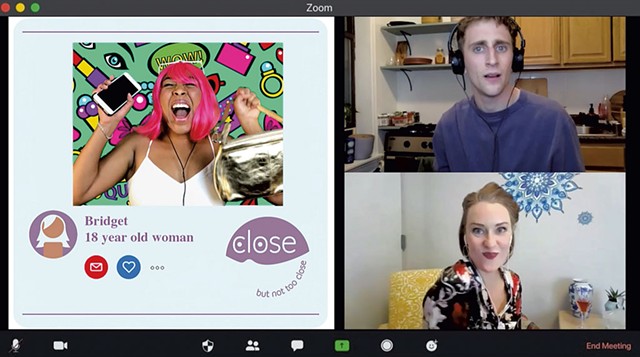 "I thought, We need to pivot immediately," Biancosino said in a phone interview. "Rather than wait and see what happens, just embrace doing work digitally. That was probably the smartest decision that we made: realizing, like, the world was changing in this moment, and we should change with it."

The Project Y team decided that, if theater were going to move to video presentations, they needed to start with plays that worked in that medium, with all its glitches and time delays.

"You have to do different sorts of plays over Zoom," Biancosino said. "You can't do plays where people cut each other off all the time, because you can never know if it's going to line up."

Project Y put out a call for "Zoom plays" — scripts that had been written with a videoconference platform in mind or could be adapted to one. They received more than 600 submissions, which they collected in a database and made free to use for educational purposes. (Those who want to use a play for other reasons are asked to contact the playwright.)

"You have to do different sorts of plays over Zoom." Michole Biancosino tweet this

"It's a collection where people who are directors or running theaters or education programs are going and looking for material," Biancosino said.

Project Y selected four plays from the database to produce for its annual Women in Theatre Festival, which features female playwrights and prioritizes women working in all roles in theater production. Three are already available online, and the fourth will be released on Friday, March 19.

Called "Close (but Not Too Close!)," it's a 25-minute musical, with book by Paloma Sierra and lyrics by Julia Koyfman, about a dating app for people who want a relationship but are too nervous to leave the house and meet people. While not a pandemic story, it plays on the inherent awkwardness of video calling and online dating.

Biancosino directed the musical with Smith, who lives in Pittsburgh. "I think it just felt so of-this-moment," she said. "We've all been forced into this asocial way of being."

The sound on the video recording of "Close" is remarkably clear, matching the quality of the singing — far from what we've come to expect from Zoom calls. Biancosino said Project Y hired a sound technician who discovered the actors could use free software to join a virtual "room" and sing and harmonize together with very little lag.

"At rehearsal, when they were all singing together and able to do it in real time, it was the first that any of us had experienced that sort of technology working since the pandemic hit," she said. "That was very exciting for everybody."

Typically, Biancosino spends her winters teaching in Middlebury and her summers working in theater in New York. But this year, she's sticking around Vermont to launch Tiny Barn Theatre. The tiny barn is in Biancosino's backyard, and she will put on a series of "hybrid" shows, produced simultaneously for a small audience (maybe six people, she said) and a livestream.

"We've commissioned playwrights to write short, hybrid theater acts — and we're calling them experiments, because we don't know how they'll work — where you really acknowledge the dual audience," Biancosino explained.

"That's the benefit of Vermont — the space, and that there's so many people here who are interested in arts and interested in having interesting conversations after seeing a play," Biancosino said.

For info on or tickets to Tiny Barn Theatre, email tinybarn@projectytheatre.com.