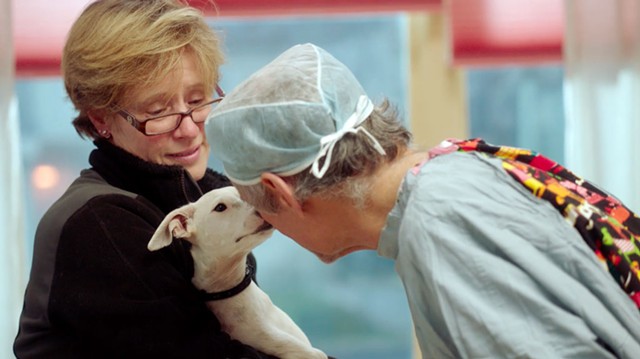 Nearly three decades ago, long before she became an award-winning filmmaker, Cindy Meehl was despondent. Her dog, a 6-year-old shar-pei, was dying. On the verge of losing hope, she broke down in tears at a pet food store. A stranger approached and suggested Meehl take her dog to the integrative veterinary clinic of Dr. Marty Goldstein in South Salem, N.Y. Following a regimen of dietary supplements and homeopathic treatments, the dog made a full recovery and lived to the age of 12 — far past the life expectancy of its breed.

"She just radically turned into a puppy again," Meehl recalls in a phone conversation from her home in Connecticut. "It was the most amazing thing I had ever witnessed."

On Thursday, August 22, The Dog Doc, Meehl's second feature film as a director, will open the fifth annual Middlebury New Filmmakers Festival. The fly-on-the-wall look at Goldstein's veterinary practice examines his use of controversial treatments such as cryosurgery and intravenous vitamin C therapy.

"I just want people to see it — that's my goal," says Meehl, who will attend the Middlebury screening along with Goldstein's colleague Dr. Jacqueline Ruskin. "If it can save a dog, it's just worth everything."

MNFF artistic director Jay Craven notes that the fest strives to pick an opening-night film that is "edifying and gratifying at the same time." He thinks The Dog Doc fits the bill.

"It speaks to health care universally," Craven says, "and so it's that ideal kind of film that is both intimately specific but at the same time leads us to think in larger terms about overall issues of health and treatment, and also the importance of animals to many people."

Meehl is among 60 filmmakers who will attend this year's fest — a new record, according to MNFF producer Lloyd Komesar. Perhaps the most famous of the attendees is Oscar-nominated writer-director Paul Schrader, who will join Craven onstage for an hourlong conversation following a Saturday screening of his 2017 film First Reformed.

Craven met Schrader through author Russell Banks, whose novel Affliction Schrader brought to the screen in 1997, and who will also be part of the Saturday conversation. Perhaps the best-known writer-director based in Vermont, Craven remembers the Taxi Driver screenwriter telling him that he begins his writing process by focusing on themes, as opposed to plot or character.

"It's something I've kept with me; it's something I share with students," says Craven, who teaches at Sarah Lawrence College in Bronxville, N.Y., "because students sometimes think about plot, maybe think about character, but [they] rarely start their filmmaking process thinking about themes."

Other notable guests include veteran character actor Bruce Greenwood (The Sweet Hereafter, Thirteen Days), Oscar-winning documentarian Barbara Kopple (who's making her fourth consecutive MNFF appearance) and 2017 MNFF honoree Ricki Stern, who got her start in the movie business as a second-unit coordinator on Craven's 1993 feature debut, Where the Rivers Flow North. The screening of Stern's documentary about the national abortion debate, Reversing Roe, will feature a Q&A with Dr. Colleen McNicholas, the last remaining abortion provider in Missouri.

"I cannot imagine a film more of the moment, with the Supreme Court likely to weigh in on the fate of Roe v. Wade next year," Komesar says.

"I think there's nothing more difficult for an independent filmmaker than navigating the world of distribution, because it's so much a buyer's market in the United States," Craven observes.

While the festival programmers didn't set out with a thematic agenda, Craven notes, a thread that emerged during the programming process was a focus on immigration-related issues. Kopple's New Homeland looks at a boys' summer camp in Ontario that takes in refugees from Syria and Iraq. Seadrift examines the lasting repercussions of a 1979 incident in which a Vietnamese refugee killed a white fisherman in a small Texas town. It's paired in the program with the short film "Santuario," about a Guatemalan asylum seeker who's been living in a Greensboro, N.C., church since May 2017 to avoid deportation.

The theme of women in media is spotlighted in a "female biopic block" on Sunday. The series includes What She Said: The Art of Pauline Kael, a doc about the influential New Yorker film critic; Be Natural: The Untold Story of Alice Guy-Blaché, a portrait of the often-overlooked silent film director; and Raise Hell: The Life & Times of Molly Ivins, which profiles the outspoken newspaper columnist famed for her caustic wit.

Reflecting on the progression of the festival, Komesar feels "kind of blessed" to reach the fifth-anniversary milestone, he says. He cites the "level playing field" the organizers created by pairing shorts and feature-length films in the program as a key reason the fest continues to attract new filmmaking talent.

"The niche that we picked turns out to be a good one — that is, support of first- and second-time filmmakers," Komesar says. "We've stayed very true to this as we go into our fifth year, and I think it pays dividends for us, because we're increasingly getting traction with new filmmakers who look forward to coming to Middlebury."