As the old saying goes, "When life gives you lemons, make lemonade." For a more contemporary example, just look to an industrial park in Middlebury. There, a partnership of beverage entrepreneurs is taking excess alcohol that's generated during the fermentation of kombucha and making it into artisanal vodka.

Appalachian Gap is making Aqua Vodka, 88-proof and certified organic, from the alcohol by-product of Weaber's kombucha. Burkins poured a bit of the vodka into one of the tiny plastic communion cups the distillery uses for samples. It was surprisingly sweet and velvety, with a rich, lingering flavor that was hard to identify.

Kombucha, the naturally fermented tea drink, is a rising star in the beverage industry, projected to approach $800 million in U.S. retail sales this year, according to Statista.com. But it is not supposed to be an alcoholic beverage. Weaber and the Aqua ViTea team had been studying for several years how to control the amount of alcohol that is naturally generated during their product's fermentation.

"And we need alcohol," Burkins said, explaining that Appalachian Gap prides itself on fermenting all of its own base alcohol before distilling it into their line of spirits.

The distillery and kombucha facility operate about 300 yards apart in Middlebury's Exchange Street industrial park. In 2016, a casual conversation precipitated a creative solution to their complementary alcohol problem.

Prior to 2009, no one believed that any significant alcohol remained in customer-ready kombucha, although it was known that the fermentation process did produce some. Kombucha is made from combining brewed black or green tea, a sugar source, and a SCOBY, the acronym for symbiotic colony of bacteria and yeast.

The SCOBY, a slimy, jellyfish-like blob, ferments the tea into a funky, vinegary, lightly fizzy beverage. While the yeast eats the sugar and creates carbon dioxide and ethanol (drinking alcohol), the bacteria turn some of the ethanol into amino and other organic acids, including acetic acid, the source of kombucha's vinegar notes.

The problem arises when enough ethanol accumulates in kombucha to require regulation as an alcoholic beverage. That limit is defined by federal authorities as 0.5 percent or more alcohol by volume (ABV) at any point from the start of production to consumption. Even if the alcohol level is acceptable when it leaves the producer, traditional kombucha is a live product and can continue to ferment in the bottle.

Ten-year-old Aqua ViTea is an established player in the industry. The company produces about 30,000 gallons a month, employing 35 people in a 62,000-square-foot facility. Its line of bottle and draft kombuchas is distributed in 25 states.

Weaber was introduced to kombucha while living in Portland, Ore. "The first time I drank it, I had a visceral reaction," he recalled. "Every part of my body fell in love with it."

After he and his wife moved to Vermont, Weaber started selling kombucha on draft at the Middlebury Farmers Market in 2007. "Nobody except for hard-core old hippies knew what it was," he said with a chuckle. "I had a lot of kombucha spit in my face."

Weaber persisted, slowly developing a following for the "fizzy, probiotic tea beverage," as he described it. "I wouldn't shut up about it. I would go into way too much detail about all the health attributes," he said. "It was like I was standing on a soapbox." 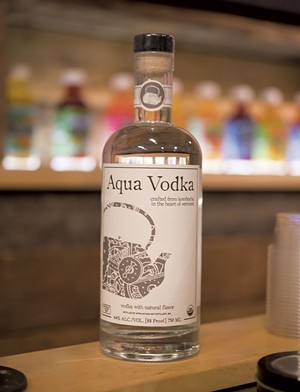 The Middlebury Food Co-op started to carry Weaber's kombucha, and he expanded to several other Vermont stores. "This was all happening around the birth of the industry," he noted.

Then, one afternoon in the fall of 2009, he was in his small kombucha brewery — in the basement of his Salisbury farmhouse — when he heard a knock at the door. Weaber opened it to find three agents with guns and badges: two from the Vermont Department of Liquor Control and one from the federal Alcohol and Tobacco Tax and Trade Bureau (TTB).

"It was a very difficult next four or five hours. They got up in my grill pretty deep," Weaber recounted. "They had me diagram and dictate my entire brewing process and recipes. One guy disappeared [on my property] and came back a while later to report there was no distilling equipment on the premises."

Weaber knew they were trying to verify whether his kombucha contained too much alcohol. Like all commercial kombucha brewers involved in the emerging industry back then, he believed that the natural balance between yeast and bacteria activity kept his product's alcohol content well under the legal limit.

"I told the agents, 'I can assure you, it's nonalcoholic,'" Weaber remembered.

They took some samples, and Weaber heard nothing for six months. Meantime, he decided to get his product tested. To his surprise, he learned that his kombucha, and that of a few other brewers in the region, ranged from 1.5 to 3.5 percent ABV — well above the 0.5 percent limit and, at the higher end, close to the level of some light beers.

The kombucha entrepreneur was shocked and disappointed in himself. "I had been naïvely believing everything on the internet," Weaber acknowledged. "I realized we had a problem ... and I needed to preemptively try to find a new process."

Tipped off by his unexpected visitors, Weaber was ahead of the game when the issue of alcohol in kombucha hit the news in 2010. Another brand's bottles bubbled over in a Whole Foods Market in Portland, Maine, prompting testing that showed alcohol levels above the 0.5 percent and triggering a voluntary recall of kombucha by the country's largest natural foods distributor. Adding fuel to the fire, actress Lindsay Lohan made headlines that same year by blaming kombucha for failing a sobriety test, a defense later disproven.

The industry was competitive, said Weaber, but the publicity contributed to the founding of a professional association called Kombucha Brewers International. Weaber had high hopes that members would work together on their common problem, "but at the first meeting, I realized it wasn't going anywhere," he said. "Everybody wanted to talk about the alcohol, but as soon as everyone got into the room, they didn't want to talk about the alcohol."

KBI and individual companies have since taken different tacks on the issue. Some argue that alcohol testing methods are imprecise and that new technology should be adopted; others are lobbying to raise the federal threshold to 1.25 percent ABV. A few brands accept that traditionally made kombucha will always exceed the existing ABV limit and choose to comply with federal guidelines for alcoholic beverages.

To control alcohol levels, some kombucha makers have focused on tinkering with formulations, including diluting them. PepsiCo-owned brand KeVita pasteurizes its kombucha to halt fermentation, then adds shelf-stable probiotic cultures.

Many brewers, including Weaber, say that all of these modified products are not authentic kombucha and mislead consumers who believe they are purchasing a raw, probiotic beverage with specific health attributes. A recent class action lawsuit filed in California made this claim against KeVita.

Eli Cayer of Urban Farm Fermentory and Gruit Brewing in Portland, Maine, started brewing kombucha in the wake of the 2010 Whole Foods incident. He has always produced and marketed kombucha under his winery license with a label stating it contains 1.5 percent alcohol. Cayer acknowledged that it has probably hurt sales to have his kombucha stocked in the beer and wine section, but he believes firmly in truth in labeling, he said, as well as maintaining the integrity of the product. "We're not doing strange things to the product to strip things out," he said. "We just want to make and sell raw, pure kombucha."

As for the many smaller brewers, Weaber believes that about 80 percent probably exceed the allowed alcohol level, although most don't invest in testing. "It's my adamant belief that you can't make authentic kombucha without alcohol over 0.5 percent at any point during the process," he said.

A big stumbling block is the lack of a single accepted definition of kombucha, which Weaber had hoped KBI would take on. "KBI has spent more time trying to hide the alcohol rather than define what kombucha should be," he said.

After his experience in 2009, Weaber developed a method to restrict the vitality of the SCOBY to control the amount of alcohol in his kombucha, but, as production grew, that approach did not scale effectively. "We slowed down our growth, studying and studying, trying to figure out how to make a product that was authentic and compliant," he said. "We're trying to do the right thing, to survive as a company, and to make this beautiful, alive and curative product that can be served to everybody."

Aqua ViTea finally landed on an acceptable and effective, if very expensive, solution: a machine developed for the wine industry. In the spring of 2016, the company started running its base kombucha through a $1.68 million, custom-built spinning cone column that extracts alcohol under low-temperature vacuum pressure.

Weaber has also invested in an in-house testing lab run by a microbiologist. The kombucha goes in at about 3 percent ABV and comes out at about 0.3 percent, he said, acknowledging that the initial level requires that the company comply with TTB alcoholic beverage guidelines.

When Aqua ViTea first brought over samples of extracted alcohol to Appalachian Gap for a test distilling run, no one knew how the results would taste. Weaber, Burkins and Hubbard had decided to try vodka because it's a large, diverse segment of the spirits market.

"We wanted to draw attention to the fact that kombucha produces alcohol," said Weaber.

"It's got sweetness and fruity tones and an interesting and subtle bitterness from the tea," said Burkins. "And it's utterly unique," added Hubbard.

Plus, concluded Weaber, "It has a good story."