Middlebury College to Say Adieu to an Online Venture 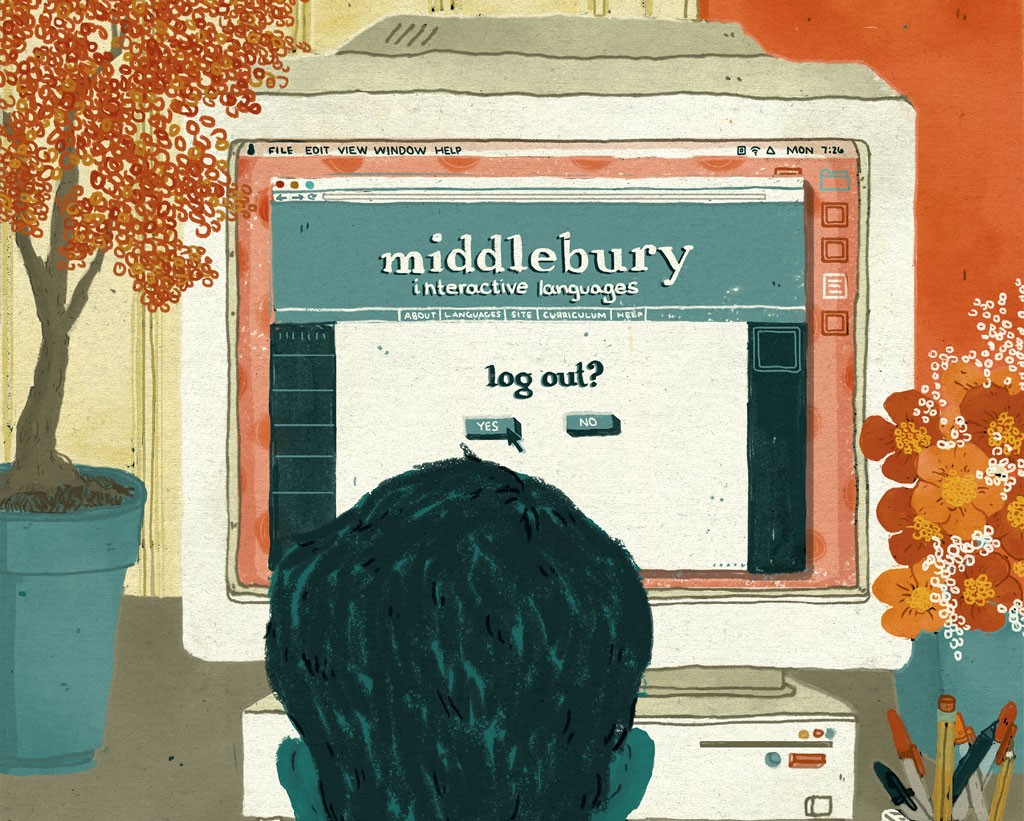 It's finito, vorbei, fini. Or soon will be, once the lawyers do their work. Middlebury College wants out of the for-profit foreign-language education venture it formed five years ago with K12, Inc., one of the nation's largest online course providers.

By year's end, the college hopes to have sold its 40 percent stake in Middlebury Interactive Languages to K12, which currently owns 60 percent of the company. Some Middlebury faculty saw the pairing of the highly selective New England college and the for-profit virtual education company as a bad match to begin with — akin to the class brain consorting with the rich kid. Faculty upset with allegedly weak standards at K12 took a no-confidence vote in MIL last year.

Others saw the partnership, a first for the college, as an intriguing experiment that could bring in new revenue by leveraging the college's expertise and international reputation in foreign language study. The arrangement, supporters felt, could help Middlebury beef up scholarship programs to assist students with the school's ever-rising tuition and fees, which this year hit $61,000.

In the end, though, the "Little Ivy" tower and the publicly traded company didn't prove compatible. Earlier this month, Middlebury's new president, Laurie Patton, announced the school will exercise an option to exit the partnership: "Going forward, MIL will be able to chart its own strategic course without having to balance the different priorities of two owners," she predicted.

Meanwhile, according to Patton, Middlebury will stay "committed to pursuing its tradition of excellence and innovation in language education at the college, the Middlebury Institute of International Studies at Monterey, the Middlebury Language Schools, and at our 36 Schools Abroad campuses."

The idea for the venture had come to life under former Middlebury College president Ron Liebowitz, who left the job in June after an 11-year tenure. Liebowitz excelled in finding cash for the college; he oversaw a fundraising campaign that surpassed its $500 million goal by $35 million.

Middlebury invested $5 million in K12 to found the 2010 MIL partnership, and college leaders hoped to make money on the deal. For K12, the alliance provided an opportunity to beef up the company's offerings in the study of foreign languages for high school students and tap into Middlebury's reputation for stellar academics.

K12 borrowed curriculum ideas from Middlebury College, and several faculty members provided their expertise in temporary, part-time or full-time positions. Aline Germain-Rutherford, Surdna professor of linguistics at Middlebury, is on loan to Middlebury Interactive as its chief academic officer. Barbara Sicot, who taught French at the Middlebury Language Schools, helps with curriculum development at MIL. She blogged a tarte tatin recipe recently on the company's site to illustrate how cooking from French recipes can boost vocabulary.

Along with digital courses, Middlebury Interactive offers summer language-immersion academies for middle and high school students. The students pledge to speak only the language they are studying — the same approach Middlebury College uses at its summer language schools for adults, where the motto is "No English Spoken Here."

K12 offers online courses and curriculum in French, Spanish, Chinese, German and Arabic. The company is also ramping up offerings in English as a second language to meet growing demand among immigrant and refugee students.

Nobody's talking on the record about the details of the negotiations regarding the breakup, but it's a good possibility the college wants back more than the $5 million it put in. "We believe that the value of our equity in the company exceeds the amount of our investment," said Bill Burger, Middlebury College's vice president for communications and marketing.

Could it be that the college wants the word "Middlebury" to be excised to make the disassociation clear? It's "reasonable" to assume the name of the company is a topic for discussion, said Burger.

Middlebury Interactive has 55 employees at its office on Exchange Street, near the Middlebury College campus, and another 20 or so who work remotely. There are no plans to change staffing levels in Vermont, said Michael Kraft, vice president of corporate communications at the Herndon, Va.-based K12.

Nor should the college's decision to sell its stake be viewed as a reflection of how MIL is doing. Kraft would not detail profit numbers for MIL, but says it is solid financially.

The company is a big success, he said. "Think about it. Think about how many thousands of students benefited from what Interactive built, think about how well it's been received by the public schools and private schools ... It's worked phenomenally."

Earnings before interest and taxes for K12 were — excluding certain charges — $43.7 million, a reduction of $10.8 million from the previous year, on revenues of $948 million. That's an operating profit margin of 4.6 percent.

Criticism about MIL's academic quality is off base, Kraft said. "We invest an enormous amount, and our guiding principle is all about educating students."

The company educates some 120,000 students nationally in full-time virtual schools and offers online courses to brick-and-mortar ones. More than 200,000 students worldwide use MIL courses. "We have our superstars, and we have kids who need remediation. That's true in any system," Kraft said. In many states, K12 school kids perform as well as or better than students in comparable school districts, he said.

While Kraft and other company spokesmen point to successful test scores, critics say the company deserves a low grade. Earlier this year, a report blasted K12's operation in California, where it educates some 14,500 students at virtual charter schools and in 2013 received $95 million in public funds.

The study, by the Washington, D.C.-based research and policy center In the Public Interest, faulted K12 and its subsidiary, K12 California, for poor academics, low graduation rates, underpaying teachers and allowing some students to claim a full day of attendance after logging on for a single minute. "This is not what virtual education in California should look like," the report concluded.

This drubbing came after other criticisms of the company. In 2014, the National Collegiate Athletic Association found fault with the academics at two-dozen K12 virtual schools and said athletes could no longer apply credit from the courses toward eligibility in NCAA Division I or II colleges.

Paula Schwartz, Lois B. Watson professor of French at Middlebury, called the news reports about K12 "shocking" and pushed a nonbinding faculty vote to sever ties with the company. It passed 96-16 in May 2014.

In an interview this week, Schwartz said she wasn't surprised Middlebury decided to exit a partnership that she believes "turned out to be a disaster." She views K12 as a disreputable company. "The press reports were extremely disturbing, even if only half of them were true," Schwartz said.

Faculty also raised objections to the quality of MIL offerings. They pointed to errors in some materials, including a Latin course. Some of the many references to Middlebury College on the MIL website also didn't ring true, Schwartz said. In one case, MIL suggested Middlebury College had helped develop a curriculum "that Middlebury faculty didn't know existed, much less created," Schwartz said, adding: "There was a lot of concern about these claims that were not based in reality."

The vote and continued opposition from faculty played a role in the college's decision to end the relationship with K12.

"Middlebury College didn't have the control it needed to make sure that the products and the marketing and the branding and the quality control were consistent with our mission as a leader in higher ed," said Jon Isham, a Middlebury professor of economics and environmental studies and director of the school's center for social entrepreneurship.

He initially had supported the venture and believes the college should consider for-profit models in the future. "For-profits are not inherently bad," he said. "They often deliver goods and services that people like. I don't think it would make sense because of one experience to say we shouldn't partner with for-profits."

Isham, however, came to agree with the critics and joined in the no-confidence vote. The lesson? "I do think what this teaches us is that faculty are essential leaders and voices," Isham said.

For some faculty critics, online education was the problem. They argued that K12 virtual charter schools were draining resources from public schools.

Isham, however, believes it was appropriate for Middlebury to experiment with computer-based learning. Many colleges are doing the same, and at much larger levels, he said. "We're just putting our toe in the water there," he said.

"Education is moving very quickly in directions that none of us can predict," Isham said, and it would be a mistake for Middlebury to dismiss online education simply because it's new. "It's already clear that there's a huge a market for it."

In his observation, faculty members are often "risk averse," and this attitude creates some inherent tension when new ideas are under consideration.

"I like taking risks, personally," he said. "This is the challenge of running a liberal arts college in the 21st century. We've got to try new things and build new partnerships, even as you are true to your core mission."