Middlebury College Students, an Architect and Habitat for Humanity Collaborate to Build Homes 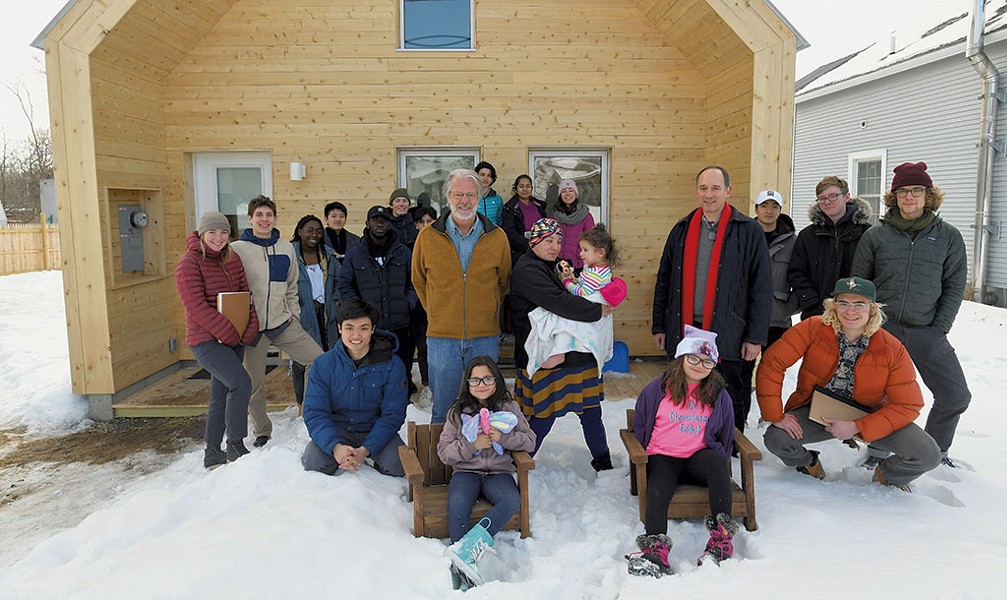 Doraleeann and Frankie Rivera and their three young daughters —Lillianna, 8; EmMarie, 6; and Tatianna, 2 — were barely getting by while living in a deteriorating trailer in Bristol. The couple works at the Charter House Coalition, a nonprofit based in Middlebury that serves the homeless of Addison County. During their eight years in the trailer, the Riveras realized they were spending all their money on repairs.

"It was a nightmare," said Doraleeann, who goes by Dora. "The furnace caught fire twice. The pipes were constantly freezing because there was no insulation, so [often] there was no water through half the house. We slept in one room in case the heat went out during the night."

Fortunately, that nightmare is over. Dora recalled it while speaking by phone from her current home: a newly built Habitat for Humanity house on Seymour Street in Middlebury. The family of five, plus their two dogs and three cats, moved in on December 22. The ultra-modern house is not only highly energy efficient, it's also architecturally eye-catching, with a streamlined gable form and standing-seam metal cladding that place it squarely at the leading edge of design.

Habitat for Humanity of Addison County has built houses before, including four in Cornwall designed pro bono by architect Jean Terwilliger, whose practice is located there. But the Seymour Street house is the first to be designed through a partnership with Middlebury College and Middlebury architect John McLeod. Five more houses are due to emerge from this three-way collaboration: a smaller house behind the Riveras', to be constructed beginning this spring, and four houses on adjacent lots on Green Street in Vergennes.

Amazingly, undergraduates are designing these abodes. Over a yearlong series of courses taught by McLeod and his former partner, Steve Kredell (who now works for gbA Architecture in Montpelier), students in the college's architectural studies program research a site, draw up preliminary designs, create construction documents, secure permitting, stick to a budget and help build each house. (Some students take all three classes through the spring, fall and January terms; others stay for one or two.)

McLeod provides "invisible guardrails," as he puts it; after all, the students' prior exposure to architecture when they begin the class typically consists of a one-semester introductory class. Addison County Habitat president Steve Ingram and building committee leader Ashley Cadwell attend every class to weigh in on the organization's needs and requirements.

Real-world professionals who regularly collaborate with McLeod Architects — including builders, energy-efficiency experts, and civil and environmental engineers — provide input during class and on-site.

McLeod has taught at Middlebury since 2005. And each summer since 2012, he and Kredell have run Island Design Assembly, a weeklong design-build seminar in Penobscot Bay, Maine. Those students complete small service projects such as a composting station or a picnic pavilion. McLeod pointed out the rarity of the experience his Habitat students are getting — especially at a place like Middlebury, which does not have a professional architecture program.

"Everything else I teach is hypothetical. Even in accredited architecture schools, most of the assignments aren't intended to be built," he said. "This is a real project, real client, real budget, real schedule, real permitting — everything we deal with in our professional practice. It's kind of crazy. But [the students] do rise to the occasion."

Learning From the Ground Up

Nest sat in on the second class of a new cycle that will result in a house on Lot 18 in Vergennes. (A model for the Lot 19 house, created by last year's class, rested on a drafting table; building commences in summer 2020.) Most of the 15 students in the seminar are sophomores. Also in attendance were Ingram, Cadwell and Jason Larocque — founding partner and president of Otter Creek Engineering — with his colleague Brent Rakowski, senior project engineer.

During the first class, the students had walked the site — a sloped and wooded lot, by everyone's account — and the experts were there to explain what they needed to think about. Rakowski gave an overview of Act 250, Vermont's environmental land use permitting system, and Larocque advised on tree removal, how winds would affect snowdrifts and how to spot drainage problems despite the frozen landscape.

The students' questions were mostly big picture. "Will we meet the family soon?" asked one. Another wondered, "Should we read Act 250 ourselves?" (No to both: Ingram said Habitat was still in the process of identifying a family for the house, and the Otter Creek engineers had already obtained an Act 250 variance permit for the sites.)

"I just don't know how much we are responsible for," said one of the three female students.

Cheryl Engmann, a sophomore architecture major from Farmington, Conn., said later by phone that she had signed up for the class because of a long-standing interest in Habitat. She belongs to the Habitat for Humanity club at the college, which gathers volunteers to help build projects.

"I was definitely scared going into [the class]," Engmann said, "because there is so much responsibility on the students. But John has a good way of delegating tasks and having us come together and use everyone's ideas to create something else. Which is pretty cool."

"I was so shocked that this program is even offered to sophomores," said second-year Isabelle Gorrivan, a New York City native who is working on a joint major in architecture and environmental studies. "I think it's really interesting that we get to think about all this, but it's also reassuring to have experts working with us. We don't have to know everything about building a house."

After the engineers' chat, the students presented initial ideas for the house with the help of images gleaned from the internet. Engmann suggested "different ways to cut into the land, or create something on stilts" while still considering accessibility. The lot's incline inspired Gorrivan to imagine something "almost like a hobbit house, half in, half out ... with a living roof" that would be either embedded in the slope or imitative of its angle.

McLeod noted by phone that the process was deliberately open-ended at this early stage. He concluded the class with a slide show meant to counteract any preconceptions about houses — the most "personal" of buildings. Among the examples he showed were structures in Alabama designed and built from found materials by Auburn University students of architecture professor Samuel Mockbee's Rural Studio.

"My big thing is, let's not default to anything. It should be an investigation," McLeod said.

The lone senior in the class, Jack Allnut from Seattle, another joint architectural and environmental studies major, is the only student to have worked on the Seymour Street house. The seasoned Habitat helper is charged with teaching the newbies AutoCAD, Adobe Illustrator and other software programs the students will use to create documents and renderings.

"Middlebury tends to be a place where a lot of classes are theoretical and abstracted from the real world," Allnut commented. "I found the Habitat class really refreshing. It was a very applied process of figuring out the constraints — what Habitat could build, the cost, historic preservation rules, sustainability with all the newest systems and technologies. We did a lot of research."

'Waking Up in Heaven' 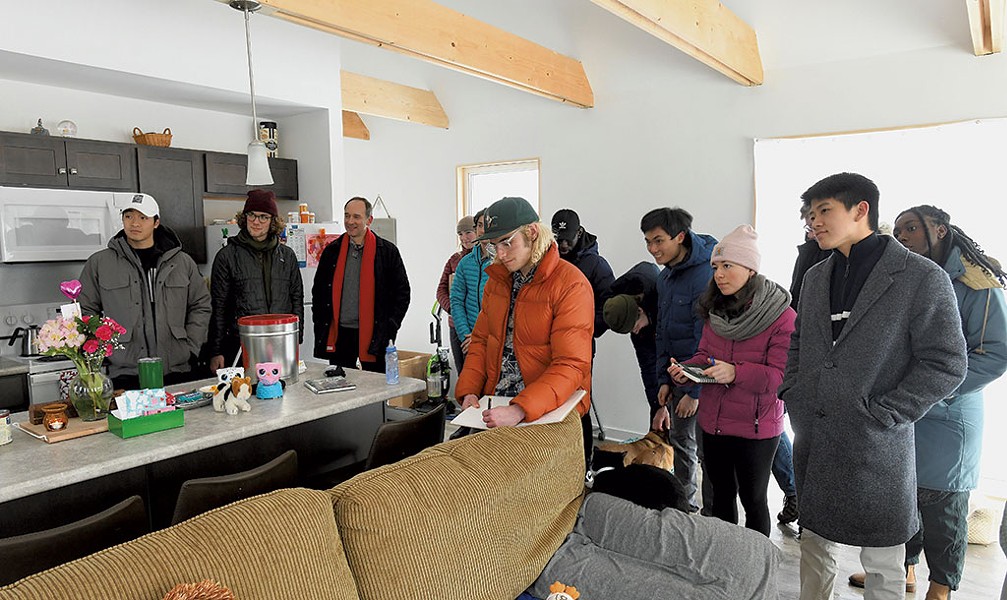 Dora Rivera recently gave Nest a tour of her house. The structure forms a metal-skinned tunnel from the street to the backyard. At the front entry — a kind of porch created by the extruding gable form and clad in eastern white cedar — she pointed out the place where solar panels are due to be installed this spring.

Habitat houses in the county are built to Efficiency Vermont's high-performance efficiency standard — its top tier — but the Riveras' home is the first to have rooftop solar. The entire house runs on electricity, including two heat pumps that provide heat and AC and an on-demand, tankless hot-water system. So the family is likely to have a low to nonexistent energy bill.

Inside, three bedrooms are situated in a line off a brightly sunlit hall with a half-vaulted ceiling accented by wood beams. Above the bedrooms is a spacious second-floor storage area. The building ends in a combined family room and kitchen with full vaulted ceiling. Wide glass doors capture the sun's heat and light.

McLeod recently took his current students to see the Seymour Street house and meet the Riveras. The house's exterior seems uniquely suited to its surroundings, with a gabled front that echoes the 19th-century houses around it. The architect insisted that the students began with no assumptions.

"We explored all different roof forms: butterfly roofs, shed roofs, different gable pitches," he said. "Ours is a 12-on-12 gable, [meaning its pitch is] a 45-degree angle. It's a classic. It's really pure geometry."

A smaller version of the house will soon rise off the back left corner of the Riveras' plot. McLeod originally imagined that the two houses would be aligned on an axis extending from the street. "I have a tendency to be a little overly pure about form and geometry," he explained. But a few of the students "made an ultimately compelling argument about preserving sight lines to the street."

In other matters, he steered them away from passionate ideas. Some wanted to put the entrance on the side — which would have required an overhang for water runoff, thereby interrupting the conceptual intent of the tunnel form, which leads from public to private areas.

As Allnut recalls, "It was definitely great to figure out how to organize work as a team but also not get too attached to personal ideas."

As for the results, the senior added, "To see someone living in it — that was a pretty powerful moment for me. The kids and the grandma were there, and the two dogs, and it was amazing to see the space being used to the maximum potential. It's great to have some of the energy we expend in studios have a real impact on someone's life."

For Dora, that impact is immeasurable. "It's the best thing that's ever happened to us," she said by phone. "Even on a crappy day like today, I'm not worried about my children being warm. Nothing's going to break on us. Everything's functioning."

After talking to several Cornwall Habitat house recipients, she discovered that they had escaped similar hardships. "They were struggling, their houses were falling apart, and they needed a safe place to raise their children," Dora said.

Habitat houses go to families with children who must be able to afford a combined monthly mortgage (which includes property tax and homeowners' insurance) of $750 to $850. In addition to navigating substantial paperwork, they are required to pay off all debts before moving in — a process Dora said took her nearly four months. Then each adult has to spend a minimum of 200 hours volunteer-building the house. Dora said she worked many more: "I was here from breaking of dirt to very last nail in the wall."

But it was well worth the effort. "The day before Christmas, my oldest daughter woke up and said, 'It's like waking up in heaven every morning,'" Dora recalled. "I absolutely think what [Habitat, the college and McLeod] did for my family was completely magical."

Central Vermont painter's life was "marked by an inspiring resiliency"