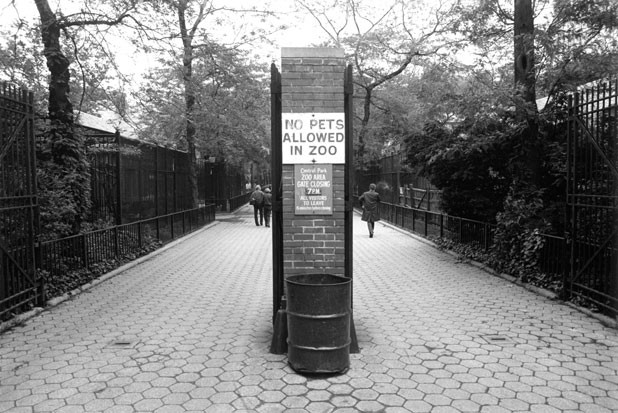 Tad Merrick was well known as Middlebury’s unofficial town photographer until his death from brain cancer last October at age 60. Working for nearly 30 years from his commercial studio on Main Street, Merrick recorded many local residents’ most joyous occasions while also doing more mundane work, such as taking their passport pictures.

His less familiar art photography gained exposure in a 2009 show at the Town Hall Theater’s Jackson Gallery. And now the Middlebury College Museum of Art is displaying three Merrick photos that it recently purchased for its permanent collection.

“It’s rare for the college to buy that much work by a local artist,” says Ken Pohlman, the museum’s exhibit designer and a friend of Merrick’s. “But Tad’s work was judged to be of museum quality.”

The three black-and-white photos, taken at different phases of Merrick’s career, readily reveal why the Jackson Gallery show was titled “A Certain Ambiguity.” They also suggest the stylistic versatility of an artist who was able to do both noir and humor.

“Untitled (West Hill, Vermont)” could be a still from a horror film. A young girl in a white dress, her arms outstretched, leans forward in a cemetery in this 1993 work. Is she gesturing to someone, or something? Is she a ghost?

In the earliest piece in the trio — “Untitled (Southwest Ireland),” from 1978 — two girls look into the camera as they stand side by side in front of a blackboard that’s been chalked with stick figures. One of them is smiling, or possibly grimacing.

Merrick’s photos present “blanks to be filled in by the viewer,” Pohlman wrote in an essay accompanying the Jackson Gallery show. They’re interactive works that engage the imagination. As Pohlman observed, Merrick leaves it to his audience to complete his pictures.

Both the Vermont and Ireland photos point to the influence of Ralph Eugene Meatyard (1925-1972), famous for his creepy images of subjects, often children, wearing grotesque masks. Merrick’s work isn’t nearly as macabre, but the two pictures do have an unsettling effect — more subtle in the Ireland schoolroom composition than in the Vermont cemetery scene, which registers as equal parts jokey and spooky.

Meatyard had a material as well as artistic impact on Merrick’s development as a photographer. While studying at the Kentucky-based Center for Photographic Studies in the mid-’70s, Merrick was awarded the Ralph Eugene Meatyard Scholarship.

The third piece hanging in the Middlebury museum shows a wry side of Merrick’s work. It’s a simple, straight-on shot of the entrance to the Central Park Zoo, taken in 1982. “Untitled (New York City)” has a perfectly symmetrical arrangement, with a brick column at dead center posted with a sign reading, “No Pets Allowed in Zoo.”

It manages to be moody as well as funny. Three figures in the distance are walking away from the camera along a row lined with iron bars. The setting is suggestive of an outdoor prison — which, come to think of it, works well as the definition of a zoo.

Merrick’s commercial work included shooting items in the permanent collection of the college’s art museum. The current display of his photos thus carries a poignant sense of reciprocity — the client has become the patron.