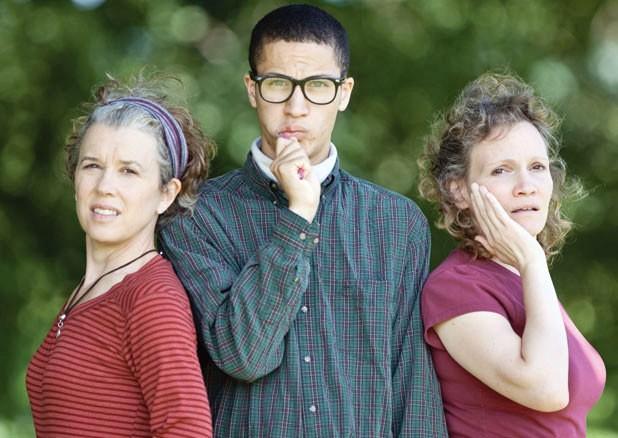 It’s Body Awareness Week at Shirley State College, a fictional school in a fictional Vermont town in Annie Baker’s play Body Awareness. But the plot that unfolds could easily take place in any real college town. In fact, Baker’s character-driven comedy happens in Middlebury — in Town Hall Theater, not the school. Vermont playwright Dana Yeaton is directing the Middlebury Actors Workshop production, which opens next Wednesday for a four-night run.

At the center of the play is a family: Joyce, a high school social studies teacher; her partner, Phyllis, a psychology professor; and their 21-year-old son, Jared, who may or may not have Asperger’s. Their world turns upside down when they agree to host one of the Body Awareness Week visiting artists, a male photographer named Frank. His chosen subject? Nude women.

For the members of this family, who were already struggling with their respective self-images, this is a “catalyst for crisis,” Yeaton says. They each “have about the worst week of their lives all at the same time.”

The crises actually begin when Joyce and Phyllis, who are convinced that Jared has an autism-spectrum disorder, one of the primary characteristics of which is a lack of empathy, give him a book on the subject. They hope that he’ll read it, identify with the condition and diagnose himself. Instead, he’s outraged. He threatens to kill his mother, Joyce, but, Yeaton says, “He’s big into the OED” (Oxford English Dictionary). So, Jared picks an exotic and sophisticated form of French execution with which to threaten his mother, to hilarious effect. “He’s what makes so much of the play crackle,” says Yeaton.

Then the photographer arrives. “[He] turns out to be one of those traveling angel or traveling devil characters, depending on your view,” says Yeaton. To Joyce, who senses that this man could have a fatherly influence on her son, he’s the former. To Phyllis, a staunch feminist who is deeply offended by his subject matter — he photographs women of all ages and shapes, including some who have had mastectomies — he’s the latter.

This is the first time Yeaton has directed a play other than his own. Working with MAW is also a first, though he says he never misses their shows. But Yeaton was eager for an opportunity to direct something by Annie Baker, a 30-year-old playwright from Amherst, Mass., whose work he admires. “It kind of makes me mad,” he admits. “She’s come to this playwriting gig with all the weapons: The dialogue never fails... There’s no fat, the little details in the beginning pay off in the end. What seems like an idle comment, when it comes up again, makes you grimace.”

Baker’s comedy is all about “playing the moment for real,” Yeaton says. He thinks of her dialogue, which is tight and spare, as a kind of “lie detector” for actors. “The moment [they] lean into the comedy and try to goose that laugh line,” Yeaton adds, “it doesn’t work.”

It takes some deft actors to pull that off. And Yeaton says he couldn’t be more excited about his cast: MAW veterans Melissa Lourie (Joyce), Karen Lefkoe (Phyllis) and Mike Kiernan (Frank), and Middlebury College student Chris de la Cruz (Jared). About de la Cruz, 21, a member of the college’s improv comedy troupe Otter Nonsense, Yeaton says, “I feel like I’m in that situation where we’re just about to introduce a star to the community.”

He adds, “It’s a truly human comedy when we laugh so hard, we cry.”

When her play debuted off Broadway in 2008, Baker told the New York Times, “My goal for the play is to not judge anyone, to get at that point where everyone is equally right and equally wrong, so the humor comes from that.”

Oh, and clothes come off in this play. Best to leave the kids at home. It is a story about body image, after all.

It’s also a story about empathy. In an effort to debunk his parents’ hunch that he has Asperger’s, Jared tries to prove that he does share others’ feelings. “It must be hard to not be that pretty anymore. To get old,” he tells Phyllis in one failed attempt.

“He’s without a filter,” says Yeaton. “And for that reason, we find him endlessly funny.” And, perhaps, refreshingly honest.