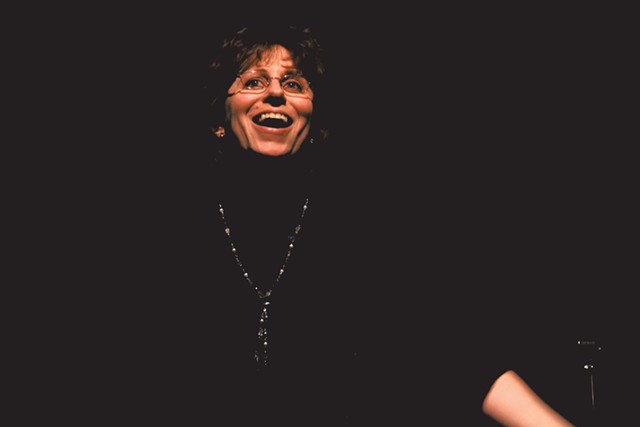 When a beloved dies, those left behind often yearn for one more heartfelt conversation or day of reminiscing. Such desires aren't normally fulfilled — unless one lives in a futuristic world of time travel and sophisticated robots.

In early September, the Middlebury Actors Workshop presented a reading of Jordan Harrison's Marjorie Prime, which uses technology to explore the slippery nature of memory. An android, programmed to look and act like 85-year-old Marjorie's deceased husband, is intended as a balm to the octogenarian's grief but instead throws the family into emotional chaos.

A 2015 Pulitzer Prize finalist for drama, Marjorie Prime was the first in MAW's new Cutting Edge series — staged readings of contemporary plays that challenge audiences to consider humanity in new ways. The company is presenting the works in a variety of Middlebury venues.

Spearheading the series is new Weybridge resident Rebecca Strum, a longtime actor, director and educator from the New York City area. She directed the New Jersey professional premieres of David Mamet's Oleanna and Paula Vogel's How I Learned to Drive. Strum is also the founder and artistic director of the Academy for Visual and Performing Arts in Mount Tabor, N.J., and holds a doctorate in performance studies from New York University.

When she and her husband decided to move to Vermont, Strum sought an arts scene that she could plug into.

"Melissa [Lourie, artistic director of MAW] has really taken me under her wing," Strum says by phone. "I asked how I could get involved, and because I just came directly from New York and saw a lot of what was happening down there, we thought that there could be an opportunity for MAW to produce something a little edgier."

For the series, Strum and Lourie selected four scripts to direct over the year.

The second in the series is The Nether by Jennifer Haley, this Sunday, November 5, at the Vermont Coffee Company Playhouse. Winner of the 2012 Susan Smith Blackburn Prize, The Nether examines what goes awry in a virtual reality in which protagonists choose their identities and indulge in endless fantasies.

In February, the series will present Sex With Strangers (2009) by Laura Eason at Town Hall Theater Studio and, in June, The Big Meal (2012) by Dan LeFranc at Stonecutter Spirits. The former play conflates love, lust and the nature of identity in the digital age; the latter charts five generations of a typical American family navigating atypical circumstances.

Three of the four Cutting Edge plays focus on technology. "It seems to be a trend, and something that modern writers are concerned with," says Strum.

If you haven't heard of these plays, it might be because most venues necessarily forgo newer (read: financially riskier) works in favor of known crowd pleasers, whether classic or contemporary. While local theater companies such as Vermont Stage and Northern Stage routinely bring newish works to the state, the Cutting Edge series aims for just that — without the expense of a full production.

"Artists have insight into the troubles of society," suggests Strum. "I won't say these plays are warnings, but they compel the audience to take a look at society critically. New theater is important, and that's what we're trying to bring to Middlebury."

Strum says that a staged reading is one of the best ways to focus on the text of a script. "Most staged readings are done in new-play development when the writer is still producing drafts," she explains. "But I also think staged readings can illuminate the text more than if people read them on their own.

"When I direct a full production," she continues, "I am asking the audience to focus on my version of the text, my direction. The lights, the set — they all add a layer of interpretation. Without those things, the experience is more pure."

Throughout the Cutting Edge series — including audience feedback — MAW is assessing whether any of the four plays might warrant a full-scale production at a later date, Strum says.

The original print version of this article was headlined "Theater Readings From the Edge: Middlebury Actors Workshop Embraces Challenge With New-Play Series"