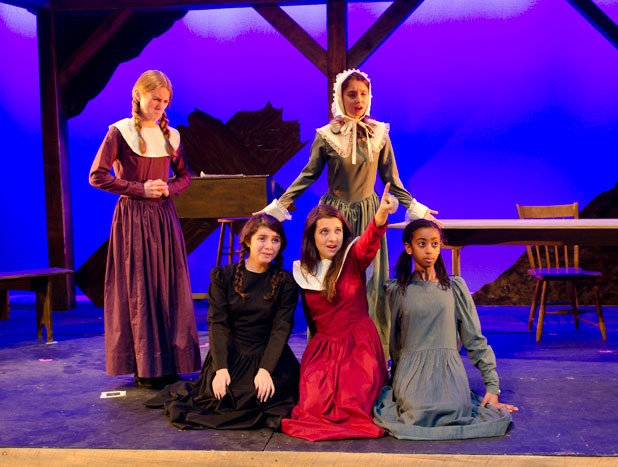 In 1692 in Salem, Mass., more than 150 individuals were arrested and imprisoned — and 20 put to death — after being charged with the felony crime of witchcraft. In 1952, American playwright Arthur Miller wrote and staged The Crucible, based on the Salem witch trials; it was an allegory for the then-current scourge of McCarthyism, in which the government blacklisted and interrogated citizens suspected of being communists.

In 2012 in South Burlington, Vt., a middle-school production of The Crucible speaks to an ugly phenomenon known to its cast, crew and classmates as bullying.

Mass hysteria, rumor mongering, prejudice: If humans’ fear-based tendency to suspect and subjugate each other seems not to change much over time, neither has the power of art — in this case, theater — to address injustice. It’s a timeless lesson that pubescent performers at the Frederick H. Tuttle Middle School are learning on stage as well as in related educational materials.

Last weekend at the adjacent South Burlington High School auditorium, however, they were just trying to learn a little Theater 101. How to move, and not move, the props. How to enter and exit the stage. How to move like you’re 50 years old instead of 13. How to think ahead. As director David Bailey barked out instructions, the young actors and crew gamely worked through their blocking and their lines. Sometimes, a play is just a play.

The students get The Crucible’s message, though, according to assistant director Avni Nahar, a 16-year-old junior at SBHS. “We asked the kids what they thought it was about,” she says, and adds that a short study guide was assembled “because everyone in middle school will see the play.” In the high school, Miller’s classic work is part of the current curriculum, Nahar says.

Under Bailey’s direction, students began rehearsing in late September. A math and science teacher at SBHS, Bailey produces plays at the middle- and high-school levels through the First Light Theatre Project, which he founded. Its mission is to provide students with the “training and experience to develop as theatre artists, designers and technicians,” according to its website.

Why choose such newbies for his productions? Years ago when he was primarily directing musicals, Bailey explains, he discovered “that middle-level students had some unique qualities. They were open to risk taking. They brought a novel energy to the stage. They inspired me to move toward serious drama, and First Light began as a result.”

Nahar got involved with theater in middle school herself — “I started with lighting,” she notes — but doesn’t currently participate in high school drama because its schedule conflicts with her classes. About this time last year, she adapted Sophocles’ 442 BC script to “modern language” for First Light’s Antigone — creating something middle schoolers could get their heads, and their mouths, around. “Antigone is really close to my heart,” Nahar said at the time. “It has some important issues that we can connect to the world today.”

As for The Crucible, Bailey says, “I’m not sure the cast totally gets the circumstances of the time period and the events, but I’m not sure I do, either. With middle school, it’s all about process.”

A field trip with the students last November to Salem, Mass., “was wonderfully bonding,” Bailey says. “Discovering tragedy in our characters was emotional. I’m not sure how the production will turn out, but the ride has changed our lives.”

In The Crucible, actors dress and talk like early-American Protestants, but the concept of bullying comes through loud and clear (even if that McCarthyism thing does not). For kids today who are bullied to the point of no return, suicide is sometimes the unfortunate result. “That’s happening in the real world,” Nahar says. “It’s so horrible. Rumors can get really big and spread chaos.”

Despite the play’s downer subject, Nahar — like, seemingly, the rest of the cast and crew — is psyched to be involved. “It’s an amazing piece of work,” she explains. Live performance in general, Nahar adds, “is unlike anything else. It’s exciting to take the words and bring them to life in different ways.”