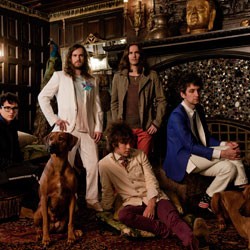 MGMT exploded into popular consciousness in 2007 with the surprise smash hit Oracular Spectacular. The record comprised a collection of pitch-perfect singles that cast the band — then a duo of founding members Andrew VanWyngarden and Ben Goldwasser — as emerging pop impresarios. Accordingly, their sophomore album, Congratulations, ranked among the most anticipated of 2010. That’ll happen when your full-length debut sells more than 1 million copies, as did OS. But a funny thing happened on the way up the Billboard charts.

MGMT are now a five piece and worked with noted psych-rock auteur Pete Kember, aka Sonic Boom [Spacemen 3, Spectrum], who produced Congratulations. And rather than rehash OS on the new record, they dove headlong into hook-laden psychedelia. The stylistic about-face alienated legions of fans who had expected more of the same danceable, car-commercial-friendly synth-pop heard on their previous album. Retribution on the blogosphere was swift, as seemingly every would-be critic with a MacBook feigned snarky outrage. How dare they be artistically challenging! The horror!

In the months since, Congratulations has actually fared well both commercially and critically. And MGMT have quietly taken their place alongside modern pop’s rising artistic provocateurs.

In advance of the band’s headlining performance at the Lake Champlain Maritime Festival in Burlington this Thursday, Seven Days caught up with MGMT drummer Will Berman by phone from a hotel room in Montréal.

SEVEN DAYS: Were you surprised by all of the negative feedback surrounding Congratulations? It seemed to start even before the album was released or leaked.

WILL BERMAN: We were all kind of surprised, just because we were so confident in what we were doing and what we were making. We were kind of in our own world and weren’t really thinking that far toward the horizon or about how the album would be received. We were just in the moment when we were making it, which I am glad we were. It wouldn’t have come out as well if we were trying to tailor it to other people’s expectations. And it obviously didn’t meet up with some people’s expectations, whether it exceeded them or totally felt underwhelming to people.

SD: But the record has actually done well. So, maybe you turned on some new fans who weren’t as into the pop stuff?

WB: I’ve been hearing a lot of people who thought the first three singles on Oracular Spectacular were too poppy. But people who were into more obscure shit started becoming MGMT fans after they heard Congratulations.

SD: What do you think this kerfuffle says about the modern blog culture and the changing way we collectively consume music?

WB: On one hand it’s great, because it can generate buzz. But on the other hand, it gives everyone a level playing field and this attitude that everyone can be an expert on something, when that may not necessarily be the case. It’s hard to look at a blog and gauge the authority of the person [writing]. And I think a lot of people jump on bandwagons more easily because of the anonymity of blogs.

SD: It seems to work both ways. MGMT was certainly helped early on by blog buzz. But many of those same people are the first to tear into the band now.

WB: I think that’s an interesting thing that’s been happening to a lot of bands lately. People can create great-sounding demos so easily on their own, without actually having a band. And then they can disseminate those demos on the Internet. And things can blow up way before there is even a band to play the songs live. A lot of bands, like us, and my previous project, Amazing Baby, get trapped in this position where people are judging the live act immediately after the band blows up, and haven’t had time to really hone their skills as a live band.

SD: It’s interesting that MGMT made a record so far removed from what most people were expecting. But it’s even more interesting that you did it on a major label. Was there ever any hesitation from Columbia Records?

WB: Yeah. I think so. But, thankfully, they remained very hands off. I mean, along the way they’d ask, “Are you sure you want to do this?” But they didn’t ever take the reins in any major way. They really trusted what we were doing … even when we couldn’t tell them, exactly, what we thought we were doing.

SD: Is it actually possible that major labels are finally turning a corner, philosophically, and realizing they might be better off letting artists be artists?

WB: Well, what choice do they have? Now they have to be a little bit more experimental in their approaches.

SD: Ben and Andrew wrote all of the songs, but they involved the band more than on Oracular, which I imagine was a unique challenge — for them and you.

WB: They brought in these sort of skeletonized songs, and then we got to decorate them. It was kind of like having a bare Christmas tree, and we got to fill it up with ornaments.

SD: So, would that make Pete Kember Santa Claus?

WB: Definitely. And it’s funny you mention that, because we ended up putting sleigh bells on a lot of tracks, and Pete would refer to them as “Santa Claus bells.”

SD: It seems like he really helped to focus the album and rein in some of the more unwieldy ideas.

WB: Absolutely. He introduced us to all kinds of new music and approaches, and we really couldn’t have done it without him.

SD: So, MGMT crafted perfect little pop nuggets on Oracular Spectacular, then delved into heady psych-rock on Congratulations. Where do you go next?

WB: I don’t really know. But, whatever it is, it’s going to reflect the mood of however we’re feeling. And right now, we’re all feeling celebratory and excited to start writing again. It will probably have less melancholy-sounding stuff than Congratulations. More party oriented. Not dance-rock, necessarily. But it’s gonna be some pretty positive shit, I think.