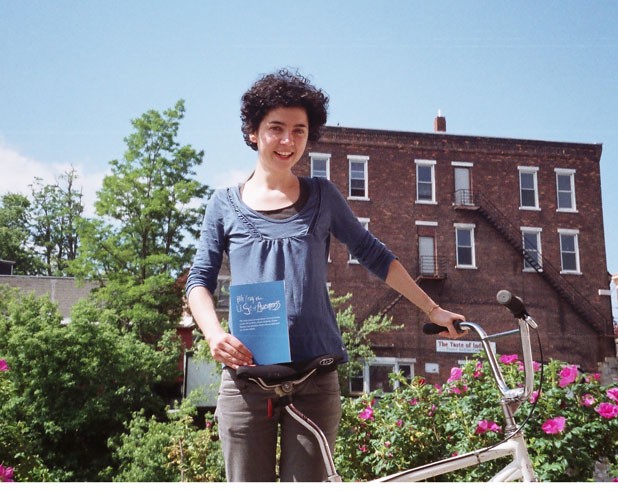 Anne Callahan belongs to a generation that's supposedly bagged books in favor of electronic media. But the 27-year-old Middlebury College alum remains very much a woman of the printed page. She recently launched an old-fashioned publishing business, Graphic Union Press, from her apartment in Harlem. And its debut book - titled Biking the U.S. of Awesomeness - further flouts the conventional thinking of the Digital Age by putting a collection of email messages into the form Johannes Gutenberg pioneered six centuries ago.

The same spirit of contrariness animated the four cyclists - three of them also Midd grads - who chronicle their 4377.5-mile, coast-to-coast journey in this slender volume. Most cross-country bikers pedal from west to east to take advantage of tailwinds. But Nicole Grohoski and friends pushed off from Lubec, Maine, and dismounted 77 days later in Cape Meares, Oregon. "It's OK to go against the prevailing winds," Grohoski explains.

She means that figuratively as well as literally. Grohoski and fellow biker Caitlin Prentice (both Class of '05) note in an appendix to the book that Middlebury College has a narrow view of "success" - namely, a high salary. So one objective of their excellent adventure, the bikers explain, was to prove "it isn't about stuff" and that "the unconventional can also be successful."

In their whimsical weekly emails, the bikers tell friends and relatives about some of the oddments they spin by in the U.S. of Awesomeness: the site of the invention of the paper bag in Palatine Bridge, New York; the Lawn Ornament Capital of the World in Michigan; the statue of the Jolly Green Giant in Blue Earth, Minnesota; the world's largest bird feeder in Mitchell, South Dakota.

Callahan, who's currently studying the history of decorative arts and design at the Bard Graduate Center in Manhattan, notes that Biking the U.S. of Awesomeness is illustrated by another Midd alum, Charles Mahal.

This initial book from Graphic Union Press has the distinction of being one of the last printed by the Stinehour Press, a Northeast Kingdom company that earned a national reputation for its museum-quality work. Founded in 1952, Stinehour closed a couple of months ago - a reflection, perhaps, of the trend away from the printed page that Callahan has set out to defy.

Long an admirer of Stinehour's exquisite illustrated books, Callahan visited the press' plant in Lunenberg and was delighted to discover "they were perfectly willing to take on my little baby project." She says she turned to the company after failing to find a printer she could work with in New York. "It's way easier to find a business like this in Vermont," Callahan said in an interview last Saturday during an appearance in Middlebury.

She placed an order for an 800-copy press run - the smallest number that Stinehour could print - for a cost of about $4000. Success in this case will be recouping that expense, at $12 per book. In the first week, she's sold 25 copies online and at Middlebury's Vermont Book Store.

It may be an old-fashioned love affair she's having with the printed word, but Callahan makes no apologies for carrying that torch. "I don't think books are going to die anytime soon," she surmises. "Besides, I'm doing what I love doing."

Click here for more info or to order books.