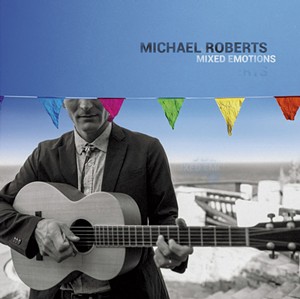 I should probably recuse myself from future writings about Michael Roberts. It's not that we're friends or anything. We've met once, several years ago for a story, and while I liked the southern Vermont songwriter just fine, I don't believe we've physically crossed paths since. But I'll confess that I'm a card-carrying member of the Michael Roberts Fan Club — or I would be if such a thing existed. Maybe I'll start one! Because here's the thing: I've written about almost everything Roberts has touched musically for close to a decade now. And I'm running out of ways to express my appreciation for what he does.

Simply put, Roberts is on my short list of favorite Vermont-based songwriters, past and present. He may or may not be "the best," whatever that would mean. But his songs tend to speak to me in that elusive and mysterious way that music fans eternally search for and seldom find.

That was true of his work with the indie-folk outfit Wooden Dinosaur. And it was true, albeit in a different, woozier way, with his honky-tonk act the Rear Defrosters. And it's been true of each Roberts solo album, up to and including his latest, Mixed Emotions.

Roberts has a rare ability to be straightforward or obtuse in his writing and effectively evoke emotion either way. He's a chameleon. But regardless of the musical or lyrical styles he chooses, certain elements are consistent in his work. There's a simple romance to Roberts' songs, often fueled by nostalgia. Above the unhurried shuffle of opener "Jobs and Pontiacs," for example, the reedy singer croons wistfully about smoking cigarettes under a street lamp, and a beat-up 1998 Pontiac that's as blue as he is. Maybe it's because I'm an ex-smoker with a soft spot for busted cars, but his portrait of a workingman dreaming his way through dead-end jobs strikes a chord.

"Brand New Ford" — Roberts obviously has a thing for cars — is a wry excoriation of income inequality. It's no less biting than louder, angrier political songs, but his song wins with tuneful wit over fury.

"New Love" is a jazz-inflected torch song about loving at a slower, but maybe wiser, pace as age creeps in. Roberts' subtle jazz influence appears again near the end of "Sleeping," where a Dixieland-ish horn reprise adds vibrant contrast to a song about dealing with depression.

Floating on clouds of Asa Brosius' pedal steel, Mixed Emotions closes on "Dream Island," an escapist lullaby that threads a needle between melancholy and whimsy. That's a trick few besides Roberts can pull off, and it's one reason he's such a Vermont treasure.

Mixed Emotions is available on Spotify and at songsofmichaelroberts.bandcamp.com.