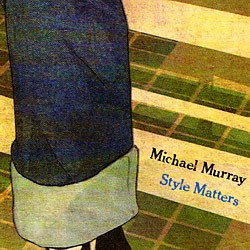 Guitars have a tendency to collect dust in Boston. There seems to be one in every disheveled Cambridge living room, one hidden in every closet in Somerville. Many of their rusted strings are played furiously in obscurity, never to be heard outside coffee houses or late nights in crowded apartments. Records like Michael Murray’s Style Matters should be savored that much more with these things in mind. Every so often, something escapes the din.

Murray is an intrepidly honest songwriter. His lyrics punctuate a strong backing outfit that delivers an impeccable performance throughout. From the album’s introductory postcard offering “Drunken Prayer” to the blues-tinged “In the Country,” Style Matters is a potent collection of chronicles in a classically American pop-rock vein. Despite an acoustic foundation, there is not a meek indie-rock whisper to be found in Murray’s structure: He is refreshingly unconcerned with waking neighbors, expressing subtle romantic inclinations or making tricky allusions to the obvious. Drummer Paul Caldes deserves some credit here, backing the record with a variety of terrific snares, and bassist Neil Lawrence has a knack for finding its many low-end hooks.

It’s hard not to conjure the more contemporary, post-Pixies catalogue of the deified, Massachusetts-born songwriter Frank Black in tracks such as the bright “Apricots” and the vivid “Take a Walk With Me.” But, while Black might pen an abstract melodic ode to an onion, Murray’s lines are charmingly accessible to the less conceptual set, inviting listeners to map the old cities’ terrain: “Maybe in Cambridge, / But in Medford / You’re a stranger; / Come look for me at Citizen’s Coffee.”

If Style Matters has a fault, it’s that it ends in something of a whimper after its auspicious start an inherent risk, given its hearty helping of 14 tracks. The glowing vocals and robust harmonica of “Out Again” would have been a more apt curtain call, and the same could be said of the piano ballad “Feel on the Walls for Familiar Things.”

“Out Again” Murray’s comparison of relationships to the tides of the ocean is particularly sharp. “I try so hard to be your rock / But the tide comes in and takes me out again,” Murray laments, escorting a lavishly expanding sing-along chorus capped by a somber harmonica.

Michael Murray appears at The Monkey House in Winooski this Friday night.