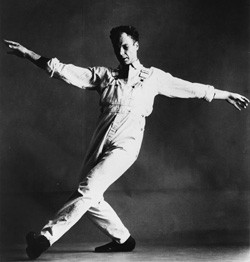 Choreographer Merce Cunningham had a plan: When he reached the age at which he was unable to continue working, he would carefully disband his company. He never quite reached that age. He was creating new choreography until just weeks before he died, at 90, in 2009.

Since then, his Merce Cunningham Dance Company has been focused on carrying out his wishes: preserving his works in “dance capsules” and launching a final, two-year Legacy Tour in celebration of the artist’s lifetime before dissolving at the end of the year. This weekend, the company makes its only New England stop: Dartmouth College’s Hopkins Center for the Arts.

Why the Hop? The MCDC has a couple of ties to Dartmouth. The Hop’s director, Jeffrey James, served for four years as the dance company’s executive director, and the composer Christian Wolff, who collaborated with Cunningham for many years, is a music and classics professor emeritus at the college. Wolff will also perform, on piano, this weekend.

Cunningham broke ground in the modern dance world with his belief that music and dance should be coexisting but independent creations. When he asked composers such as Wolff to write a piece, he revealed almost nothing about the dance it would accompany. “He might say, ‘It’s 22 minutes long,’” Wolff says. Oftentimes, the dancers wouldn’t hear the music until right before they performed.

It was all about freedom, Wolff says. Cunningham wanted everyone — the set and costume designers and the composers — to feel unbound by assignments. “He thought participation would be livelier if each person worked on their own,” Wolff says.

As a composer, Wolff says, he had no idea what the performances would look like until they happened, and that element of surprise was exciting.

“When you don’t have specific coordination, inevitably, there will [still] be coordination,” he says of the interaction between music and dance in Cunningham’s work. Dancers will land on a beat coincidentally, or the music will surge along with the movement. “It’s completely unplanned, and it’s very powerful because of that. It’s like the feeling when you meet a friend when you’re walking down the street.”

As a teenager, Wolff saw Cunningham dance in the 1950s. “I didn’t even dream of making music for him,” he says. “I was just some kid on the street.” But by 16, Wolff was studying composition with John Cage, Cunningham’s life partner and artistic collaborator. The young pianist was soon composing for the MCDC. Later, he served as the company’s house pianist for about a decade after retiring from Dartmouth.

At the Hop this weekend, the company will perform three works. “Antic Meet” (1958) is a playful piece with outrageous found-object costumes originally designed by the artist Robert Rauschenberg. A group of female dancers wear billowing dresses made from parachutes; another wears a sweater with extra arms and no neck hole. One of the most famous photographs of Cunningham comes from “Antic Meet”: He’s in the midst of a leap, a wooden chair strapped to his back.

Of that image, and the work itself, Hop director James says, “It’s an incredible feat of oddity and virtuosity.”

The company will also perform “Squaregame” (1976), which features dancers throwing duffle bags around stage; and “RainForest” (1968), which James sees as a more introspective piece, set to music by composer David Tudor. Andy Warhol designed the set, which includes floating silver Mylar balloons that travel the stage as they’re kicked by chance.

Cunningham had initially asked Warhol to design the costumes, too, but Warhol wanted everybody to be naked. “Merce loved this story,” James says. Unfortunately, Cunningham told Warhol, totally nude dancers just wouldn’t be practical. So he asked another artist, Jasper Johns, to come up with an alternative. The resulting costumes are spare, with slashes across them in a nod to Warhol’s concept.

“This is among the last chances to see the work of one of the geniuses of our time,” says James, who adds that the company’s disbanding is bittersweet. “One of the good things about the idea is that the work will survive,” he says, noting that American Ballet Theater is doing a Cunningham piece in its upcoming fall season.

But it would be impossible not to feel sad about the shuttering of a great dance company, James observes. Among the troupe members and supporters, the big question during the winding-down process has been “How can you possibly continue a company where its whole reason for being is its one artist?” James says.

Cunningham may be gone, but the dancers in his company are fabulous, Wolff says. “I think the company [members] now are probably about as good as I can ever remember seeing them.” And that, he says, is heartbreaking. Catch them while you can.