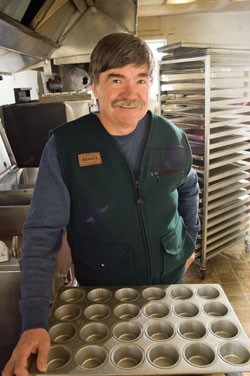 When veteran chef Steve Bogart founded A Single Pebble Restaurant in Plainfield back in 1995, his goal was to introduce Vermonters to delicious Szechuan cuisine that transcended the bland, starchy fare often found in Chinese take-out joints in the U.S.

Bogart, a Chinese-food historian who says he’s been obsessed with Asian cuisine since age 10, knew that authentic Szechuan dishes rarely feature beef. In China, he notes, cows are uncommon, and much of the population is lactose intolerant — the Chinese word for “meat” literally translates as “pig” or “pork.”

Nevertheless, just a short time after A Single Pebble opened, Bogart revised his menu to better reflect the eating habits of his patrons. Like most Americans, Vermonters consume a lot more beef than the Chinese do. “So, I put beef on our menu,” he recalls, “and we sold tons of it.”

A Single Pebble, now located on Bank Street in downtown Burlington, became one of the most successful restaurants in Vermont. Bogart sold his interest in the place in August 2009, but he still references that beef experience whenever new or veteran restaurateurs seek his advice. For an establishment to succeed, he emphasizes, it must serve its patrons what they want to eat, not what the chef or owner wants to serve them.

Today, the man who introduced Vermonters to mock eel has a new food business, but it doesn’t keep Bogart in the kitchen all weekend or late at night. Called New Territories, it’s a restaurant consulting firm for people who are looking to break into the business, buy an existing establishment or just spice up an out-of-date menu. Bogart says he gets calls about once a week from someone who’s seeking a restaurant to buy or looking for advice regarding the culinary biz.

As tends to be the case with Bogart’s line of work, his business is virtually all word of mouth. New Territories is among a growing number of individuals and firms in Vermont that provide expert consultation to the restaurant, retail food and specialty-item industries. These consultants, many of whom are former chefs, food writers, cookbook authors or restaurateurs, provide a wide range of services, including concept development; advice on dining room, kitchen and bar layouts; vendor and equipment recommendations; and even help with food science and regulatory issues concerning packaged and frozen foods.

At a time when opening a new eatery can cost a quarter-million dollars or more, it’s critical for restaurateurs to hit the ground running without stumbling over the same hurdles that have tripped countless others. Bogart says he’s always astounded to see an employment ad for the chef position at a new restaurant due to open soon.

Finding the right chef “should be the first step, not the last,” he cautions. “The whole blueprint for the entire operation is the menu. If you don’t have a chef to execute that, it’s going to be a very long and shaky road.”

A solid menu is crucial in any market, but perhaps doubly so in Vermont, Bogart suggests, where only a small percentage of the populace can be counted on to dine out on a regular basis. (Chittenden County is the exception, he notes.) Another common mistake Bogart sees in aspiring restaurateurs is wanting to serve a specialized cuisine, such as Mexican or barbecue, without understanding the typical eating habits and economics of the location.

For example, in a small, rural community, fewer than half the residents may dine out on a regular basis. Of those, Bogart asks, “How many times a month do you think they’ll go out to eat ribs or Mongolian beef?”

Food and restaurant consultancy involves more than helping someone build a kitchen or develop a creative menu. Consider the work of Brian Norder of Vermont Food Consulting Services in Morrisville. Like most local food consultants, he spent years in the restaurant industry, including several as food and beverage director at Smugglers’ Notch. From 1997 to 2010, Norder was the project director at the Vermont Food Venture Center in Fairfax. There, he helped dozens of people start up their specialty- and processed-food enterprises.

Today, Norder continues to educate local businesses, such as the Maplefields chain of convenience-store delis, about such issues as food safety, inspections and regulations. He works with chefs who are getting into charcuterie, or meat curing, to address the inevitable safety concerns. And Norder helps independent restaurants bring their most popular food items to the retail market, such as the signature marinara sauce from Mimmo’s Pizzeria Restaurant in St. Albans and Essex.

Norder specializes in food science, an expertise that many chefs and restaurateurs lack. For example, one of his recent clients asked for advice about bringing a cream soup to the frozen-food market. The problem: In the restaurant, the soup is made using a butter-and-flour roux, which breaks down and loses its original character when frozen and reheated. To make the product palatable to the grocery-store customer, Norder had to find an organic starch that would keep the soup shelf stable, appeal to the savvy, high-end consumer and still taste good.

Such value-added products can help Vermont restaurants find new revenue streams, and that’s particularly important in a down economy when most Vermonters are eating out less often. But Norder warns that even the state’s specialty-food market has gotten soft in recent years. Certain niche items, such as homemade jams and jellies, are, as he puts it, “saturated.”

“Salsas are almost cliché,” he says, “but there are still some salsa niches out there that people are tapping into.”

On the flip side, Norder sees growth opportunities in the cured-meat line, as well as in cooked and ready-to-eat dinners. He notes that uncertain times can bring opportunities for small-scale food producers, such as those in Vermont. After 9/11, he says, “Anything with security sold. That hominess, that made-in-Vermont [label], gave people a warm, fuzzy-blanket security.”

Food consultancy is itself a growth area, and virtually no one in Vermont has been doing it as long or as successfully as Robin Schempp. She owns Right Stuff Enterprises, a Waterbury-based firm that provides a wide range of food expertise to a national and international clientele.

Schempp, who describes herself as a “serial restaurant opener,” has worked in food consultancy for about 18 years. When she started in 1993, maybe three companies in the country were doing such work, she estimates. Today, there are hundreds of firms and thousands of individual food consultants, which have their own professional trade organization.

The business has changed considerably since the early 1990s, Schempp says. Years ago, many large food companies had dieticians and food scientists on staff, but not necessarily someone with a serious culinary background.

Over the years, Schempp’s clients have included some of the food industry’s most recognized names: Unilever, Kraft Foods and Nestlé, to name a few. Many of her early Vermont clients have grown up right along with her business, including Ben & Jerry’s, Cabot Creamery and Green Mountain Coffee Roasters. Schempp says she was instrumental in assisting those companies with developing their products and in-house food labs.

Today, most of her clients are outside the state, and many are overseas. For example, Schempp is currently helping a French company bring a line of natural and organic meat and vegetable stocks and purées to the American retail market. Another client is a Sicilian firm that wants to ship heritage cookies to the United States. A third is a group of Dubai businessmen looking to import a restaurant concept to this country.

Schempp’s services run the gamut. One day she’s helping a farmer turn some newfangled grains into a packaged side dish. Another day, she’s helping a bar owner develop a tiki cocktail menu. Like Norder, she tends to discourage clients from trying to sell the stereotypical specialty-food items that are “tapped out” in Vermont, including homemade jams, jellies and salad dressings.

With such a diverse clientele, it’s hard for Schempp to generalize about the most common mistakes she sees. Her favorite type of client, though, is a person who comes in with a clear food or restaurant concept but stays open to suggestions.

“Sometimes I have to start by first teaching someone how to use a consultant,” she says with a laugh. “If they come in with too many rigid ideas, it’s like that old adage: They want us to borrow their watch to tell them the time.”

Bogart, of A Single Pebble fame, heartily agrees that practical adaptability is key to success in the food business. There’s one piece of advice he offers, free of charge, to anyone looking to open or buy their own restaurant for the first time: If you never have, work in one first. More times than not, Bogart insists, the long hours and grueling physical demands of the job are enough to dissuade would-be restaurateurs. As he puts it, “That really opens people’s eyes.”