Men of the House

Meet the stay-at-home dads who traded careers for caregiving 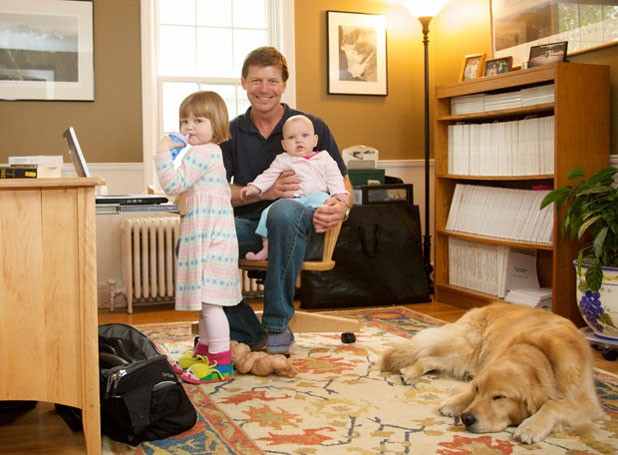 The traditional image of the American father has been under revision for decades — at least long enough to make TV’s first father, Ward Cleaver, look like a nostalgic cartoon and his latter-day “Mad Men” counterpart, Don Draper, a pointed example of the bad old days of meat, potatoes and patriarchy.

Women entering the U.S. workforce after the Second World War changed American culture. Then, when the U.S. economy took a nosedive about five years ago, the game changed again — this time booting men out of the workforce at twice the rate of women, according to the Bureau of Labor Statistics.

One combined effect of women holding jobs and men being forced out of them is that men are increasingly responsible for managing ... households. An analysis of 2010 U.S. census data finds that 20 percent of fathers with children under age 5 are the primary child caretakers in their families.

Here’s what seven of them have to say about it.

When his first daughter was about a year old, Mark Gabel did the math and realized that “my salary was paying the nanny.” His physician wife was the family’s major breadwinner; Gabel had been in retail sales and management for roughly 20 years — most recently at downtown Burlington’s Climb High outdoor gear store. The combination had worked well, he says, “when it was just about us.” But when his daughter entered her second year, he had a revelation. “I looked up one day and said, ‘This is crazy,’” he recalls. “‘My kid’s a year old. I hardly know her.’ I was watching myself become my father with no benefit financially.”

On a walk with mountaineer Simon Yates, of Touching the Void fame, Gabel got more inspiration to change course. He remembers being moved by Yates’ insight that his only regrets were about what he hadn’t done, not what he had.

Gabel gave notice at Climb High and settled in for an extended stay at base camp.

While the initial plan was for him to stay home until his daughter was in kindergarten, a second child changed the equation. Gabel made good use of his stay-at-home dad time to earn undergraduate and graduate degrees from Champlain College, the latter an MS in mediation and applied conflict studies that he hopes will help him reenter the workforce.

He admits there are tough parts, such as the “humbling” experience of being a husband who doesn’t bring home the bacon, and being the odd man out — literally — at baby yoga. There’s also doing laundry seven days a week and a workday that, by his estimate, starts at 6 in the morning and ends at 10 p.m.

But he still feels like he’s getting the better end of the parenting deal because of the bond he has established with his kids. “Not a day goes by when I don’t feel like the luckiest guy alive,” he says, “even when someone is throwing tantrums.”

When Brendan Smith and his then-wife were anticipating the arrival of their daughter, they held a series of rational sit-down talks about switching roles. There was more at stake than the traditional expectations related to gender: Smith is visually impaired. He’s not totally blind, but he can’t operate a motor vehicle.

At first, Smith was pretty nervous — and understandably so. If his child were to choke on something, would he be able to see what it was? When they had a second child, he worries about what would happen if the kids took off in opposite directions.

Smith made it through those anxious infant years by concentrating on doing the best he could. He engaged his kids in activities that didn’t require driving anywhere. “I took it upon myself to take a negative and work around it,” he says, “to get them out, go for walks with them, take them where I could on foot. Push them on the swings. Run with them. Make up for the lack of transportation. I’ve even taken them on the bus a few times, and they seem to get a kick out of that.”

It hasn’t been easy. Feeling the financial pinch, Smith went back to work part time at Hannaford supermarket, but he’s still there to greet his kids at the bus on school days. He and his wife divorced about a year and a half ago, but there hasn’t been much conflict over parental rights.

“My kids are comfortable here, they have a lot of friends, and they get into a lot of sports and do a lot of community stuff,” he says.

He also gives himself some much-deserved credit: “It’s hard enough being a single parent in this day and age, anyway, but an even greater challenge to be able to handle children on your own when you’re limited yourself,” he says. “I’ve been able to take on the challenges, and I think I’ve done reasonably well.”

Michael Wheeler and his wife couldn’t decide who should be the primary daytime caregiver for their first child. But at just about the time their due date rolled around, fate made the decision for them. The UVM laboratory where Wheeler had been working shut down. Coincidentally, he had already been mulling over whether being a stay-at-home dad would be a “cool thing to do.”

As his daughter developed food allergies and then a son came into the picture, his decision proved wise. “I thought that I might go back to work after a while,” he says, “but I’m thinking that less and less.”

It’s something of a redo for Wheeler, who became a dad for the first time in the ’70s. When his older daughters — now the mothers of his grandchildren — were born, he was working as a chemistry teacher at a small college. His busy work life didn’t allow him to be as present as he would have liked. “It’s in the minutiae of the day that kids really become who they are, and I certainly didn’t experience that like I am now.”

When it comes to parenting wisdom, “I consider myself a rank rookie.”

Being an older stay-at-home dad, he has to be vigilant in avoiding the occupational hazards of parenting. “I was sort of a young dad when my older kids were born,” he says. “I don’t have a recollection of feeling tired or holding a 20-pound child all the time, but now I do. I’ve had to learn to be careful with the way I hold them and pick them up.”

Still, he adds, being close at hand while his kids are growing has been a revitalizing experience. “It’s just an amazing thing to watch a human being develop into a person, and it’s doggone miraculous to see our oldest kid start to figure things out and ask insightful questions and make funny mistakes and all that kind of stuff,” he says. “So even though my body feels older, my spirit is younger than it was before they were born.”

This story originally appeared in the June issue of KidsVT and is excerpted here in recognition of Father’s Day. Click here to read the full story on kidsvt.com.