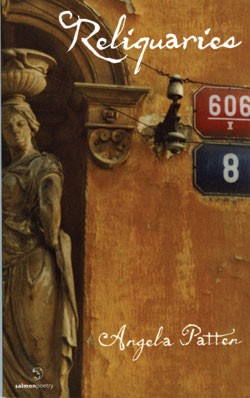 In the poem that gives Angela Patten’s new collection its title, the fossilized tongue of St. Anthony sits under glass, a reminder of “the numinous particulars of flesh.” As it takes on a meaning beyond words, the severed tongue is a wry exemplar for these eloquent memories and telling details.

Patten, who teaches poetry at the University of Vermont, will read from Reliquaries this Thursday at Phoenix Books in Essex. In her poetry, she excavates her Irish past. Her poems recollect moments in their full sensory weight, each verse a silt-laden bucket hauled up from the dark. Propelling the poems is Patten’s skill in giving new metaphorical depth to situations we might otherwise find familiar. The poem “Tricks of the Light,” about her aging father, provides this apt image for his incongruous recollections:

Sometimes a memory will surface

rising midair to a midge

as he watches from behind a bush

by the banks of the Boyne river

on a fine May morning of his childhood.

Likewise, the poem “Bicarbonate of Soda” takes a commonplace example of domestic chemistry and transmutes it into a life-giving wonder:

In Ireland it is known as

breadsoda because when married to buttermilk,

it makes insentient grain rise up for joy.

This isn’t just a recipe in verse form. The “insentient grain” also represents the narrator’s unborn child, while “leavening” stands in for gestation. When the baby is born, Patten writes, “it took no time at all to discern the wisdom / that was breadsoda in his milk-blue eyes.”

On the level of language, too, Patten discovers the extraordinary in the humble, as when her lines absorb everyday speech. Clichés, proverbs and idiomatic expressions give the reader the impression of hearing Patten’s childhood. Her family speaks clearly through the poems — especially her mother.

We’re introduced to this talkative figure in the poem “Giving Out Yards,” where she fusses, “Here I am like Mad Moll — I look a fright — / and what will people think of me / sitting here among the teacups.” Slowed down by line breaks and set in verse, her mother’s colloquial speech recovers its poetic power. In “The Change of Mother’s Life,” Patten writes of her mother’s childhood:

As a girl she polished apples in a greengrocer’s shop

Knew all apples by their natures

from the crisp Cox’s Pippin

to the tangy Granny Smith

and the knobbly Bramly cooker.

Knew too the season for blood oranges

and the axiom against eating pork

whenever there was an “R” in the month.

In this poem, Patten immerses us in the language of the past — food proverbs, the varieties of apples, and even a sign written in the coquettish voice of the fruits (“don’t squeeze me til I’m yours”). Here, as elsewhere in the collection, the seedlings of memory grow out of specific language.

The poems collect memories and hold them fast, like the reliquaries of the book’s title. Words, people, events, sounds — Patten’s poetry enshrines fragments of everyday life. Though collecting memories is essential to her poetic practice, the impulse to collect objects seems to make Patten uneasy: “I weed possessions like a swimmer / waxing body hair for speed,” she writes in “Laying Up Treasures.”

But while mementos and religious relics like St. Anthony’s tongue are lifeless, the past in these poems continues to speak through the present, the dead through the living. For example, Patten’s mother lives on through both poetry and poet. Recalling the details of her mother’s life, she writes in “The Working Classes”:

It was all old hat to me until the day

I shoved my arm into my hanging sleeve —

it was my mother’s hand emerging from the cuff.

For Patten, the continuity of generations is a consolation for the loss of her parents. Her family, in “The Way It Is Now,” inspires a moment of inexplicable happiness:

I caught myself last weekend

feeling good for no reason.

It was an evening in early fall

and I was making pesto at the kitchen sink,

and garlic. My son, home for the weekend,

was lounging on the couch after a day spent

splitting wood into stove-lengths for our winter fires.

Family, a sense of place, the logic of domestic tasks — here Patten finds in her present the components of contentedness she remembers from childhood. Suddenly unmindful of loss, she writes, “I wanted to keep on catching myself / looking for the place where all that grief had lodged / and to keep on failing to find it.”

What to Do About the Old Man’s Loneliness

Once there was a houseful of noisy girls,

their squabbling and hair-washing,

stumbling cockeyed up the stairs at night.

They’d catch him standing at the top,

one hand holding up his pajamas,

the other waving the alarm clock,

incontrovertible evidence of their crime.

Do you have any idea what time it is

behind each other’s backs.

Now they’re scattered to other countries

busy with their jobs and children,

their unhappiness. If time was money

he’d be on the pig’s back these days

for sure. The noisy relations all gone too

with their cups of tea, the organ recital

of their ailments and afflictions.

Only this enveloping silence, so still

he might not see the wing of a crow

from one day’s end to the next.

November and the color all sucked out

as if a drain had opened underground.

Except that out there somewhere

Death is putting on his shoes to take a walk

in this direction. He’s in no hurry,

has all the time in the world.

loathing the lumber of those things that gather dust,

move with you when you move.

Hummel figurines and anything with hearts.

Still I’m moved by those who sort and save

the sweepings of the past, turning

the sweaty leavings of their ancestors

into folk art. As if those dusty treasures

were the pages of a long-lost lover’s notebook,

proof that their existence made a stain.

Think of those tiny monochromatic figures

disembarking down a thousand gangways,

Sometimes a sewing machine tied up with twine

carted carefully as a sleeping child.

abandoning belongings in their wake.

Even I confess to concealing a piece

of the True Coat in a dresser drawer.

The coat my father wore when he was married,

the coat he cast about my mother’s shoulders

when they walked out together on a chilly evening,

the coat they threw over us at night to keep us warm.