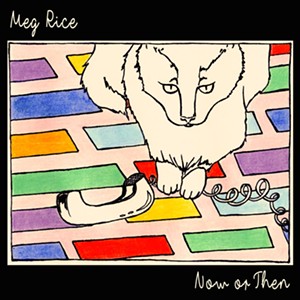 At their best, solo albums can serve to spotlight underutilized resources in the bands from which they stem. Conversely, a solo effort might also highlight how one element in a larger group can depend strongly on the creative forces that surround it. Good or bad, solo albums can be significant markers in band histories — and they can often divide fan bases.

Fortunately, that's unlikely to happen in the case of Meg Rice and her new solo EP Now or Then. Rice, a guitarist with Burlington-based femme-rock outfit Julia Caesar, has put out a predictably solid debut. It's a stripped-down affair, a record of acoustic guitars and gentle banjos, whistles and fiddles — a sort of early-morning post-breakup snapshot. It's a potent emotional space for Rice as a songwriter, and she wastes no time hitting her marks.

Now or Then opens with the title track, a country-tinged lament of heartache, booze, drugs and grilled cheese. "'Cause if I feel it now or I feel it then, it's still gonna hurt the same," she sings with the wounded knowledge that chemical means aren't going to make her pain disappear. Rice is particularly skilled at harnessing the power of a bittersweet tune. Fittingly, all five tracks on the EP dwell largely in that moody domain.

"New Decibels" evokes a raw sort of pain for the songwriter as she conducts a postmortem on a failed romance. Though the song's barometer registers those terrible lows people can bring out in one another when love goes sour, Rice isn't having a pity party. In a delicate yet defiant melody, she both regrets mistakes made and forgives herself for making them. It's an honest reflection of emotional complexity, and when songwriters can tap into that, good things tend to happen.

Rice is aided ably by singer-songwriter/producer/local-scene stalwart Eric George. He puts her vocals right up front: clear, lovely and clean. Sure, it isn't rocket science — Rice has a gorgeous voice. But there is sophistication in the art of keeping production simple, and George knows exactly how to record these songs. He treats Rice's acoustic guitar tracks as the bones of the beast but also allows them to color in all the space she has left in her melancholy compositions. He also throws down bass, banjo, mandolin and drums throughout the EP.

Fans of Julia Caesar might be waiting for a rocker, but Rice just isn't feeling that this time. She wants to sit down and tell a sad tale, to unburden herself of pain kept secret. That she does so in such an interesting, nakedly confessional way shows both bravery and confidence, two traits that stand out on Now or Then.

Download the album (and its killer cover art) at megrice.bandcamp.com.