Meg Madden Champions the Hidden Roles and Art of Mushrooms 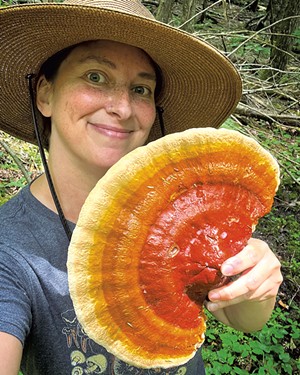 Meg Madden smiled as she held up what looked like a portobello mushroom dipped in blue paint. "This is one of my favorites, the indigo milk cap," she said. "When you cut it, it gives off a blue milk." A piece she broke off oozed blue ink all over her palms.

At Wright Park in Middlebury, Madden was leading 21 participants in a mushroom walk, seeking out a colorful bounty of treasure tucked among leaves and behind trees. Every so often she disappeared into the brush and returned with a new mushroom that got passed around the circle, photographed and fawned over like a plump new baby.

"[Being outdoors] has been my therapy during the pandemic," said participant Annette Seidenglanz, 68, who moved to Winooski in 2018 with her husband, Chuck Bowes, from outside Philadelphia. Seidenglanz, an artist, joked that she prefers mushrooming to birding because "mushrooms don't fly away." Fellow mushroom walk attendees included other artists, a scientist, a teacher and a couple of AmeriCorps volunteers.

Middlebury-based Madden, 48, is a longtime artist and jeweler relatively new to the world of mycology. Inspired to begin learning about mushrooms in 2020, she now leads educational walks for groups such as the Birds of Vermont Museum, the Green Mountain Audubon Society and the Middlebury Land Trust. The avid mushroom photographer has more than 40,000 Instagram followers, has sold photos for mushroom supplement advertising and a nature-focused card game, and will have a book about mushrooms published in early 2023. She's also been key in working to compile a catalog of state mushrooms that could help Vermont conservationists track endangered tree species.

On the Wright Park walk, Madden carried a multicolored basket that, three hours later, would brim with mushrooms of all shapes and sizes. We saw yellow coral mushrooms; green elf cup, a cluster of tiny turquoise mushrooms growing on a fallen tree; and fly agaric, a row of fat red toadstools three inches tall that Madden warned were "psychoactive, but not in a good way."

Madden told us about mycelium, a network of fungal threads or mushroom roots in the soil that can be hundreds, even thousands, of miles long. These thin filaments work in symbiosis with tree roots: Trees nourish the mushrooms, and the mycelium extends the trees' roots and increases the quantity of nutrients the trees can receive. 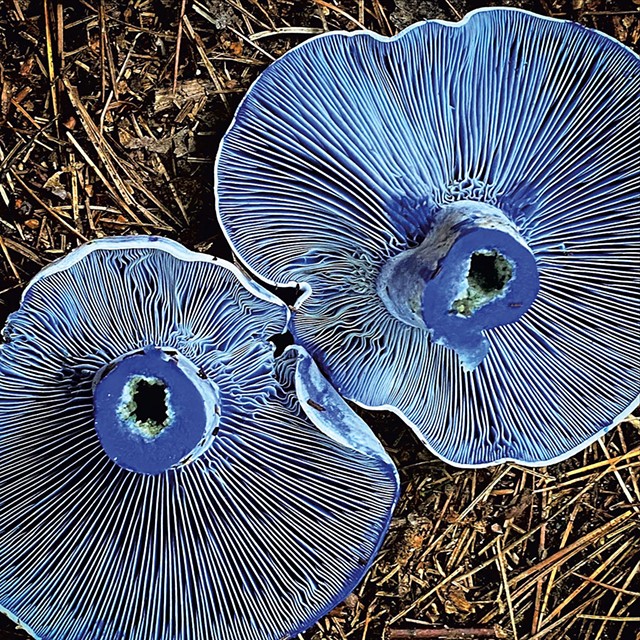 Madden drew us in by sharing the playful names of mushrooms, such as tippler's bane, chicken fat and jelly babies. She shared strange but true stories about mushrooms such as the so-called "zombie fungus," a parasite that lives in cicadas and spreads its spores through their mating attempts, even tricking males into trying to mate with each other.

Everett Marshall, a biologist and information manager at the Vermont Fish & Wildlife Department who's been on one of Madden's walks, said, "She is outstanding with the public. She's able to convey the mushroom's role in an accessible way. She shies away from using scientific names."

Madden is part of a currently forming fungal advisory group that hopes to advise Fish & Wildlife's Endangered Species Committee. One of its goals is to complete an official catalog of Vermont mushrooms. Though the state has checklists of its plants and animals, Marshall said, it has none for mushroom species, in part because few scientists study them. Mushroom identification is more common in Europe, where foraging is a part of many cultures, he explained.

But national interest in mushrooms is increasing, Marshall noted, thanks to books such as Canadian Suzanne Simard's 2021 Finding the Mother Tree: Discovering the Wisdom of the Forest, which explains the important role fungi play in ecosystem health and recovery.

In Vermont, a catalog would help the state preserve mature forests, Marshall said: "You could have a species missing, and a tree could be weakened by not having the fungal relationship it needs."

To gather data for the mushroom catalog, Madden has participated in three National Geographic BioBlitzes: community surveys to record all the living species in a designated area. Participants can identify their findings and share them with people around the world using an app called iNaturalist. 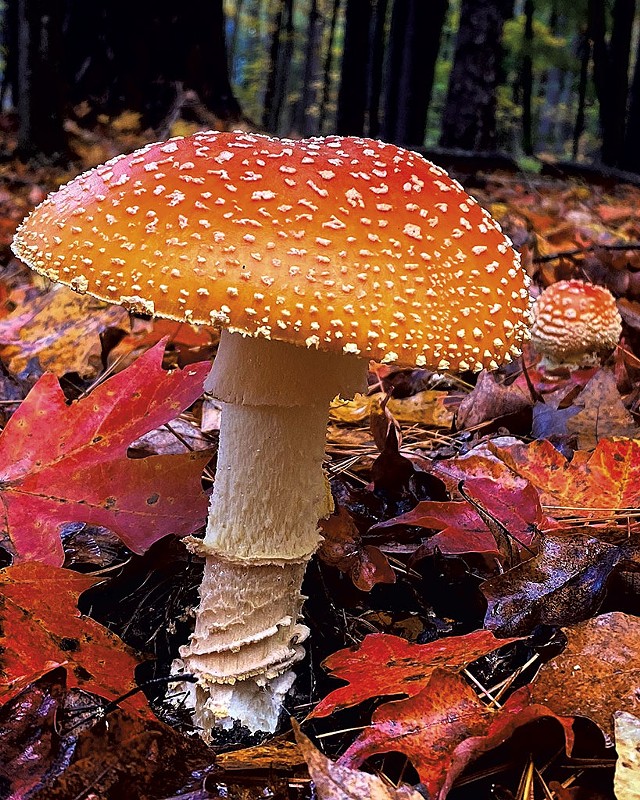 During a 2020 BioBlitz in the town of Chittenden, run by Green Mountain National Forest, ecologist Suzanne Gifford came across Madden's photos of the 31 fungi species she had logged.

"They stood out as particularly beautiful," Gifford recalled. "She was documenting fungi from a unique perspective, with expertise. We don't have that kind of expertise in the Forest Service."

Madden is currently leading an ongoing BioBlitz at Wright Park that began in October. So far, 29 observers have logged 193 observations, including 77 species of fungi.

How did a longtime jeweler and flower farmer forge a new career in mushrooms? Madden studied silversmithing in high school and started her own business, Shooting Star Jewelry, in 2006, selling handmade pieces online and at local boutiques and farmers markets. A self-described Renaissance woman, she also studied horticulture and floral design and ran her own flower farm for 10 years in the early 2000s, selling bouquets at farmers markets and wholesale flowers to shops across the state.

Madden's love affair with mushrooms began at the start of the pandemic, when she and her then-9-year-old daughter headed down backyard trails to explore the March landscape. On one such trek, she was surprised to see a splash of crimson amid the winter brush. "We thought, This can't be. There's nothing growing," Madden recalled. "But we looked closer and saw mushrooms. I had to know what they were."

After some online searching gave her a "peek into the rabbit hole of mycology," she said, she was hooked. Woods walks morphed into adventures, and Madden, who had long taken close-up photos of her jewelry, began zooming in to capture mushrooms. These photos, taken with her iPhone 11 and posted to her Instagram account, quickly drew attention. Her following jumped from 1,000 in December 2020 to its most recent count of more than 40,000. Her followers include mycologists, foragers, employees of mushroom supplement companies and everyday enthusiasts. 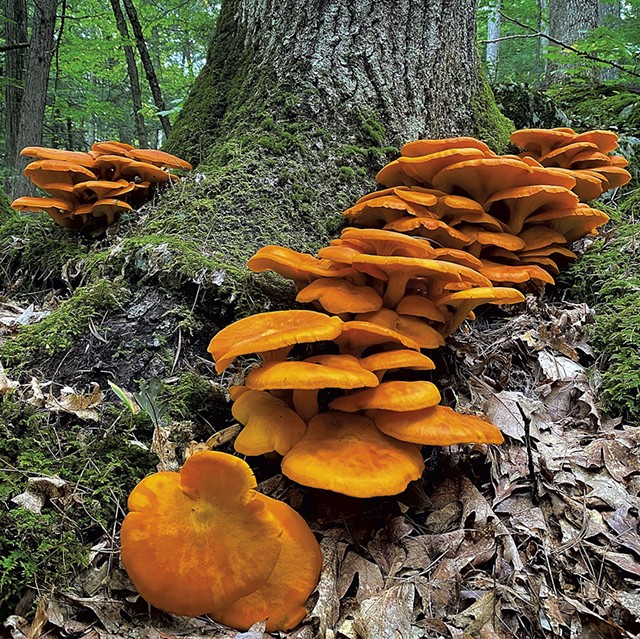 It wasn't long before people were asking to purchase Madden's photos and wanting to know more about the mushrooms. The pandemic, she believes, "allowed people to slow down and appreciate nature, to learn about what they loved," she said.

Madden has sold her photos for advertising and for use in the nature-focused card game OuiSi, made by a business based in upstate New York. In March, Hachette Book Group will publish her This Is a Book for People Who Love Mushrooms, a mix of photos and information that blends Madden's gifts for art and science.

Though her career path may seem eclectic, Madden said the common threads are her sense of wonder, her love for close-up detail and her fascination with science. Currently on hiatus from making jewelry, she's working full time as a writer, mycologist and photographer.

"It's a little scary sometimes," she said. "Making ends meet can be tricky. But it's my passion, and I've never been more excited or fulfilled by any calling in life."

Toward the end of the mushroom walk, Madden pulled out a large piece of paper that resembled a woodblock print. It was a spore print, she said, an intricate replica of a mushroom's underside made by placing it on paper for several hours.

"It is the underside of the mushroom that fascinates me," she said. "Everyone can see the top. But if you peek underneath and get the snail's-eye view, you see all the folds of the gills, the structure of pores, a view that is surprising."

Madden hopes to set these prints under glass and incorporate them into her jewelry. "To be able to say to someone, 'A mushroom made this. I didn't make this,'" she said, "that would be so cool. Nature is the best artist."