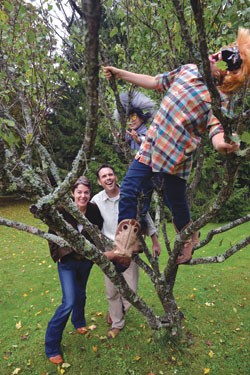 Three years ago, Lisabeth Sewell McCann of Charlotte wanted to find audio stories to share with her two young boys. She and her husband, David, both in their mid-forties, consider themselves “media-cautious parents” — they avoid visual media when possible and limit their kids’ screen time. But they still believe in entertainment and the power of storytelling, hence the appeal of audio.

Sewell McCann started scouring the internet for kids podcasts, but she wasn’t crazy about any of the sites she found. Most featured classic stories read aloud.

Where could she find original stories, stories that she could trust? Suddenly it hit her. “Oh!” she remembers realizing. “I’m married to the guy who can answer these questions!”

David Sewell McCann was a filmmaker and actor before he began teaching in Waldorf schools. He had been spontaneously making up stories for his kids, and his students, for years. “David’s gift as a teacher is his ability to spin stories at the drop of a hat,” says Lisabeth during an interview at the family’s home.

Lisabeth worked in a Burlington drug-and-alcohol-testing lab at the time. David had just left a teaching job — the family was in “this in-between place,” recalls Lisabeth. So she pitched him an idea: “Let’s make fresh stories each week and see if people will pay for them.”

David was skeptical at first. “Storytelling is so incredibly intimate to me,” he says. He worried that if the teller and the listeners weren’t in a room together, the magic would be lost.

His concern was unfounded. In December 2010, the Sewell McCanns launched Sparkle Stories, a website offering subscriptions to David’s weekly audio tales. Listeners connected to them, and to the sound of his voice, immediately.

Three years later, the couple has produced more than 450 Sparkle Stories in several different series. Listeners can purchase one story at a time or pay a subscription fee that ranges from $7 to $15 a month, depending on their selections. The Sewell McCanns currently count 1000 paying subscribers from all over the world; running the site has become a full-time job for both of them.

Lisabeth credits the couple’s quick success to the ability to share on the internet, and early recommendations from a community of mom bloggers. “This business could not have happened five years ago,” she says. “We’re grateful for it every day.”

The popularity of their enterprise is evident on iTunes — when Sparkle Stories launched a free podcast this summer, it immediately shot to the top of the Kids & Family charts.

It was featured on iTunes as a “New and Noteworthy” offering and climbed all the way up to No. 1 in its category; it’s currently in the top 20.

Its 181 iTunes reviewers are a passionate lot. “My 4yo listens to a sparkle story every night at bedtime and she won’t go to sleep without it!” gushes one. “Sparkle Stories respect kids and activate their spirit in a way I haven’t seen since Mister Rogers,” writes another. Several reviewers recommend the podcast for car rides and bedtime.

Listening to the Sparkle Stories, each of which runs about 20 minutes, it’s easy to understand their enthusiasm.

One called “The Cat’s New Home” begins: “Benjamin Thompson is an unusual name for a cat. But then Ben is an unusual cat.” David narrates the story slowly and deliberately; you can hear his theater background in his clear diction. His voice is engaging without being cloying — in other words, perfect for telling children’s stories.

In this story, the first in the Junkyard Tales series, the cat meets the other colorful characters who live in the junkyard: “Sergeant, the steadfast watchdog; Georgia Bean, the kindly rat; Mr. Flinch, the old possum” and more. The junkyard stories, David says, “are just flat-out fun.”

Sparkle’s Martin and Sylvia series focuses more on teachable moments. Siblings Martin and Sylvia, David explains, began as avatars for the Sewell McCann kids, now 8 and 11. David used to tell these stories at bedtime, and they would always address issues or emotions the boys were currently experiencing. For example, if the boys were nervous about an upcoming trip on an airplane, David would tell a story about Martin and Sylvia on a plane. Then, when the kids got on the plane themselves, they’d have a pretty good idea it was going to end well.

But not all Sparkle Stories end happily.

“I wouldn’t call them happy endings,” David explains. “I’d call them peaceful endings. They’ve worked through something. There’s a resolution.”

Indeed, Sparkle Stories can explore some weighty themes. As their listenership has grown, the Sewell McCanns have used their stories to address several national tragedies.

When Adam Lanza opened fire at Sandy Hook Elementary School last December, for example, the Sewell McCanns realized they had an opportunity to be a positive voice in the frantic media landscape.

“Like you, we’re reeling from the devastating news about Sandy Hook Elementary,” they wrote on their blog at the time. “It has us kissing our own children’s foreheads, trying to imagine how the parents of those lost children will manage in the coming days. We’re asking ourselves: ‘What can we do to help?’”

Naturally, they told a story. Not about a school shooting or a mass murderer, but a simple story about a beloved family dog killed in a hit-and-run. They wanted to capture “the horror, the fear, the isolation,” of a senseless tragedy in a way children could understand, says David. And they wanted to offer a message to kids who might be scared, confused or angry: “It’s OK to be sad, and this is a good place,” says David. “The world is a good place. Adults, for the most part, are here to help you.”

The story, which they distributed for free, was a success. Readers wrote in to thank them, including a therapist from Newtown, who wrote, “As a result of a few of my clients hearing the story today, a few hundred copies are being made now and handed out to parents in Newtown.”

Though the Sparkle Stories audience has grown, the production process for each episode is still fairly low-tech. After David has written down a story, Lisabeth, who has an MFA in playwriting, edits it with an eye toward the “cleanest narrative experience.” Then David records it — using a Mac, GarageBand and a Snowball microphone — in a little carriage house behind their home. Finally, the story is passed on to a continuity editor in Chicago. “She’ll catch if I’ve mentioned the name of the baker before and I don’t remember his name is Bruce,” says David.

Right now, the Sewell McCanns are putting out about six stories a week.

In addition to creating content for his Sparkle Stories audience, David is still telling stories to his kids — and they’re still asking for them. But now the boys also serve as a kind of market research, offering their expert opinions on different stories.

Lisabeth would like to see the family business continue to expand. “I’d love for this to be the beginning of a platform for alternative media,” she says. Her long-term vision includes connecting with other like-minded artists and musicians to join the Sparkle Stories family. After all, the subscriber model allows the Sewell McCanns to build trust among their listeners; they’re already sharing occasional recipes and parenting advice on their blog. “We have a weekly relationship with them,” notes David.

Both of these media-cautious parents still find it hard to wrap their heads around the fact that they’ve created a worldwide community of followers online.

“We had no idea what the future was going to hold,” says David. “We were just telling stories to our kids.”

Find Sparkle Stories on iTunes, or subscribe at sparklestories.com.