Meet the Man on the Sleigh — No, Not Santa | Outdoors & Recreation | Seven Days | Vermont's Independent Voice

Meet the Man on the Sleigh — No, Not Santa 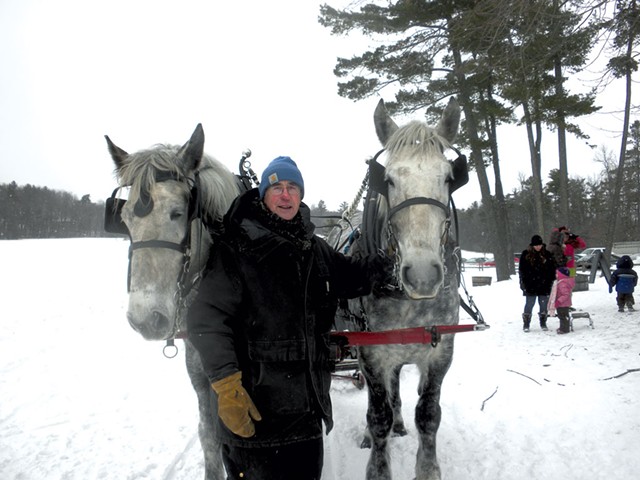 Pat Palmer isn't an especially chatty fellow, not at first, anyway. Like many native Vermonters of his generation — the 69-year-old grew up on a chicken farm in New Haven — he's economical with his words and not inclined to chitchat. But join Palmer in his barn — or better yet, on one of his horse-drawn winter sleigh rides — and ask about his draft horses, and he warms up faster than a mug of mulled cider.

Come late December and the requisite snowfall, Palmer is the guy who runs the sleigh rides at Shelburne Farms, which continue each weekend until mid-March. He's been doing it for more than 20 years now — whenever there was snow on the ground. But Palmer doesn't describe the job as "work." For him, dashing through the snow-covered woods and fields of the sprawling estate is about as good as it gets.

Palmer still lives in New Haven, with his wife, Cathy, on their 55-acre Thornapple Farm. A farrier's daughter who grew up around horses, she learned from an early age how to read the animals and their ailments. When Palmer travels to a horse auction, he says, he always brings Cathy to help him evaluate the animals before he makes a purchase. "Every horse has a hole in him somehow," he says, and adds with a smile, "just like people."

Currently, Palmer owns four draft horses, including one he bought two weeks ago in Topeka, Ind. Whatever "holes" they may have aren't evident to this reporter during a recent visit to the horse barn. Palmer works exclusively with Percherons, which are among the largest of draft-horse breeds. His biggest measures 18 hands high at the shoulders, or six feet, and weighs more than 2,000 pounds.

All four of Palmer's horses, whose markings range from snow-white to "flea-bitten" gray to jet-black, are as docile as they are powerful.

To demonstrate, he steps into the stall of Jake, an 11-year-old speckled gray gelding, and gently tugs on the animal's front left leg. The horse obediently lifts it to reveal a hoof and horseshoe of about the circumference of a dinner plate. The horseshoe is lined with Borium, a super-hard metal product that farriers use for added traction on pavement. That's because, in addition to running the winter sleigh rides, Palmer uses his horses to do residential trash collection several days a week in Bristol and Middlebury.

He first got interested in draft horses several decades ago, Palmer says, because he planned to use them for logging — a project that proved unsuccessful. For a time, the Palmers offered trail rides on their property, but they eventually decided it was too risky putting strangers with little to no riding experience on horseback.

"No matter how good the horse is, sometimes the personalities just don't click," Palmer explains. "Giving sleigh rides, I have control of the horses, and people just go along for the ride."

His horses have been hauling local trash for 19 years, nearly as long as they've been pulling sleighs. Palmer got into the former business after reading about an Oregon man who expanded his conventional trash-hauling business in an unconventional way. One summer, when Palmer's business had grown large enough to require a second truck, he tried using a pair of draft horses instead.

Then Palmer learned that Bristol's new town manager didn't want his road crew doing residential garbage collection anymore and had put the town's sanitation contract out to bid. Intrigued by the prospect of using his horses, Palmer submitted a bid and won the contract. Today, he picks up trash at about 200 homes in Bristol and, since May 2015, another 250 in Middlebury. Each route takes him about a day to complete.

Is there any advantage to hauling trash with horses instead of trucks? "Other than being fun?" Palmer asks with a chuckle. "You save money. I can do it cheaper than anybody else."

Palmer points out that his first trash wagon, which he purchased almost 20 years ago, cost him just $3,000 and is still going strong; his new one, which he uses in Middlebury, cost $15,000. By comparison, a standard packer garbage truck costs $130,000 to $140,000 and has a life expectancy of 10 years. These days, Palmer leaves one wagon in Bristol and the other in Middlebury, then carts his horses over via trailer in the morning.

Though the garbage route is Palmer's bread and butter, over the years he's also been hired to bring the bride and groom to and from wedding ceremonies in a stylish horse-drawn carriage. In his capacity as a sleigh driver, he notes, he's also facilitated plenty of weddings.

"I get a lot of guys who will propose to their girlfriends on the sleigh," Palmer reports. "I bet I've had 25 or 30 people [do so] over the years."

One year around Valentine's Day, he recalls, a man hired him to stay and give a private sleigh ride after the regular day at Shelburne Farms had ended. Palmer's customer spent the entire afternoon arranging bagged candles in the snow along the sleigh route. Palmer told his curious passengers that the mood lighting was for a fellow who intended to request his girlfriend's hand in marriage. "One girl says, 'Well, if she says no, I'll say yes!'" Palmer recalls.

Palmer occasionally offers two-mile sleigh rides on his own property in New Haven. Like the rides at Shelburne Farms, these take about a half hour. "Then we give them a hot chocolate back in the house and warm 'em back up," he says.

Palmer's enthusiasm for his animals is contagious, as evidenced by the number of local draft-horse drivers who credit him with getting them started. For some young sleigh riders, an interest in the equine begins with his invitation to take the reins.

"There have been so many young people — like, kids 10 years old — who get off the sleigh and are in seventh heaven because they were able to drive the team," says Jean Cross. An employee of Shelburne Farms, she also serves as treasurer of the Green Mountain Draft Horse Association. "That's how he got me," she adds.

As Cross explains, one summer about 10 years ago, she was watching Palmer mow a field with a draft horse. She was too shy to ask if she could try it, but Palmer noticed her interest and immediately invited her to hop aboard and take the reins. Because the mower had just one seat, Cross drove the team all by herself. "It was absolutely fantastic," she recalls.

Then, about six years ago, Cross called Palmer a week before Shelburne Farms' annual Winterfest and offered to help with the sleigh rides. He agreed. "It was colder than cold, but we had so much fun," she recalls. "After a couple of trips around the farm, I don't think he ever touched the lines again. He let me drive the whole time."

Over the years, Palmer estimates he's taught 20 to 25 young people how to drive draft horses, mostly by allowing them to join him on his trash pickup route. Usually they're teenagers, though he has taught kids as young as 10.

Despite years of running the same routes over and over again at Shelburne Farms, Palmer says the sleigh rides haven't lost their charm. He generally takes passengers through the Farms' Church Woods and back, almost always a windy ride. Along the way, they may spot deer, which seem to have grown accustomed to the horse team. "Even though we have bells, sometimes the deer will stand 10 feet inside the woods and watch us go by," Palmer says.

Palmer occasionally does moonlit sleigh rides, too, on which he points out the constellations to passengers. "I don't know if he's giving them correct information," says Cross, "but he says it so believably that you think you've learned something."

"People often say, 'Poor you. You're out here all day,'" Palmer observes. "But if you're dressed for it, you're fine." A stiff wind often blows in from Lake Champlain, and he advises potential riders to dress even more warmly than they think they should.

Palmer himself can bundle up a little less. He designed and built his sleigh so he drives standing, and maintaining his balance keeps him warm.