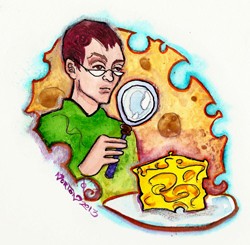 In 2004, the Vermont Institute for Artisan Cheese was established at the University of Vermont to help researchers study cheese and to educate laypersons on how to make it. Many of the state’s top cheese makers are alumni of the center’s programs, which dealt with the art and science of producing artisan cheese.

But last May, the $500,000 in federal and private funds that supplemented class registration fees dried up, including a general grant that was supplying money critical to the institute’s research. Since then, the tight-knit band of cheese experts who staffed the classes and laboratories has dispersed.

Cheese experts? That’s right. Just as Vermont has the country’s highest number of cheese makers per capita, we also have more than our fair share of professionals who specialize in various aspects of the craft, from history to tasting.

One of VIAC’s founders, former co-director Catherine Donnelly, has just returned to UVM after a six-month furlough. She spent that time editing Cheese and Microbes, a groundbreaking new book that will be published by the American Society for Microbiology Press in January. Former VIAC scientists Paul Kindstedt and Montserrat Almena-Aliste are among the contributors. Donnelly says the book should be interesting for lay readers as well as biologists, but her next project is sure to be an even more important everyday reference.

She has been tapped to be editor-in-chief of the Oxford Companion to Cheese. The company’s comprehensive encyclopedias on beer and wine are already considered inimitable resources on their subjects. Donnelly will be working with several Vermont experts, as well as cheese specialists all over the world, to complete the tome. “That’s going to keep me busy for the next three years,” the cheerful scientist says. “What’s fun about both of these books is the ability to involve Vermont players, either scientists or cheese makers, in the process of such leading work in the cheese world.”

Donnelly says there is indeed “life after VIAC.” Seven Days talked to a few of the institute’s former instructors, the cheesiest academics in the Green Mountains, to learn about their passion for dairy and how they’re staying ahead of the curd.

Vermont wasn’t always an artisan cheese capital. As a UVM undergrad in the 1970s, Paul Kindstedt focused on a larger industry in the state — the large-scale manufacture of mozzarella. Working in pizzerias during summer break, Kindstedt says, “I began to see the kinds of problems cheese can present as an ingredient in food service.”

But the biochemist, who specializes in the structure and function of cheese, grew with the artisan boom to become a leading authority on the small-scale production that he initially branded unsafe. As author of American Farmstead Cheese: A Practical Guide to Making and Selling Artisan Cheeses and last year’s Cheese and Culture: A History of Cheese and Its Place in Western Civilization, Kindstedt is a reliable academic authority.

As a faculty member in UVM’s department of nutrition and food sciences, he’s currently studying the crystallization of long-aged cheeses. That means Kindstedt’s research will likely lead to a surge in Vermont-made versions of expensive varieties similar to Italian Parmigiano-Reggiano, as he teaches cheese makers the science behind these delicacies.

What is your favorite cheese?

I have an emotional attachment to two specific cheeses — they’re not necessarily the greatest on Earth or better than all the others: Cabot Private Stock and Shelburne Farms cheddar.

Growing up, we always had Cabot cheddar. It’s simply historical fact. And I live in Shelburne. I know what [Shelburne Farms does] for [its] community. It’s a wonderful jewel of an institution, and I love their cheese. We have a big block of 3-year-old in the refrigerator right now.

When you’re focused on the science, can it be difficult to just enjoy your food?

You can enjoy at a different plane of consciousness. I’m always looking for something interesting that might make for a research grant. When I’m eating, I’ll start squeezing the cheese and crumbling it. People look at me and think, What are you doing with the cheese? I know it looks stupid, but it’s really interesting!

Are there any cheeses you’ve never tried that you’re eager to?

Thousands of them! There are hundreds in Italy and France that you just have to go there to try. All the different remote Alpine cheese, Near East, southwest Asia, not to mention Iran, Pakistan, Afghanistan. There are lots of cheeses there. Mongolian cheese is a whole different world.

What makes Vermont cheese different from others?

We talk a lot about terroir, and rightfully so. There’s an endlessly engaging link to place. But I would argue that a taste of person, of the cheese maker, is so much a signature of Vermont. This wonderful state of ours has attracted individuals with extraordinary talent.

He’s the author of The Atlas of American Artisan Cheese, but Jeff Roberts is no food scientist. However, that’s about the only cheese-related job the VIAC co-founder doesn’t hold.

A lifelong food lover, Roberts came to Vermont from Philadelphia to work for the Vermont Land Trust. He soon realized that his passion for farm products was the best way to teach about conservation. “Try this ice cream,” he recalls telling constituents. “That milk came from a conserved farm.”

Roberts’ expertise grew as a member of the board of directors and treasurer for Slow Food USA, which led to frequent visits to Italy and elsewhere in Europe, tasting the world’s cheeses along the way. He teaches food history classes, with a focus on artisan cheese and beer, not only at the New England Culinary Institute in Montpelier but also at Slow Food’s University of Gastronomic Sciences in Pollenzo, Italy.

As president of Cow Creek Creative Ventures, Roberts specializes in feasibility studies, which have helped numerous farms, from Vermont to South Korea, to perfect projects in cheese making and meat curing.

What cheese is in your refrigerator right now?

There are at least 18 different cheeses in my fridge right now. Cheese from Lazy Lady Farm, cheese from Woodcock Farm — the last of their Summer Snow. I have cheese from Spring Brook Farm. Then, I have probably five different blue cheeses. I still have cheese that I brought back from Italy, a 36-month-old vacche rosse Parmigiano-Reggiano. I didn’t bring that much back, but I actually brought more back than I thought. There are English cheddars, and I have one little piece left of Polish oscypek.

My wife just goes nuts. My cholesterol level is way below hers and more than better than normal. I’ve been blessed with some very good genes. I eat cheese every day, sometimes more than once a day, some for lunch and some for dinner.

Have you always loved cheese?

I’ve always loved to eat! When I was in the service [as a Navy meteorologist], we were in places like Spain and Italy and Greece. I can still envision the appetizers in Athens — great feta cheese and Kalamata olives — I ate that every day. The interest has always been there. The cheeses weren’t always there.

Is there any cheese you just can’t stand?

I don’t like Kraft Singles. I probably ate my share of industrial cheese years ago. It’s being introduced to the real stuff that makes you realize what you’ve missed. My brother teases me that I used to make grilled Velveeta sandwiches.

Montserrat Almena-Aliste was just about to complete paperwork to incorporate a consulting firm when she got a call from Green Mountain Coffee Roasters. She had landed the job of senior sensory scientist with the Waterbury corporation.

Just as perfume companies employ highly specialized professional “noses,” Almena-Aliste has a sought-after palate, particularly for cheese and coffee. And both working and prospective cheese makers can benefit from her uncommon expertise.

With her new full-time job, Almena-Aliste’s own company may be on hold, but that won’t stop her from occasionally consulting and teaching courses. Her first session of classes, “Essential Principles and Practices of Cheesemaking,” launched this week at Vermont Technical College.

What got you started in food science?

I’ve always loved animals. I studied veterinary sciences in Spain. I was scared to open my own practice. I thought, Oh, my God, if I kill someone’s cow, they’re very expensive animals, it’s their livelihood! For me, food science was about making good-quality products. It wasn’t until I came to Vermont that I realized that the land, the food, was a factor in my everyday life.

What is your favorite cheese?

Are there any cheeses you’ve never tried that you’re eager to?

There’s one from Spain that I haven’t tried called La Armada. This cheese is very artisanal, very small production, very rich, very piquant. It’s got pungent blue notes. It’s interesting from my sensory point of view, but I don’t think it would be very good.

What’s the most extreme thing you’ve done in the name of curds?

Eight years ago, I was eight months pregnant and I had to judge a fresh goat milk cheese category for the American Cheese Society. It was terrible — salty, sweet and combined varieties. I was super sensitive and it was no fun.