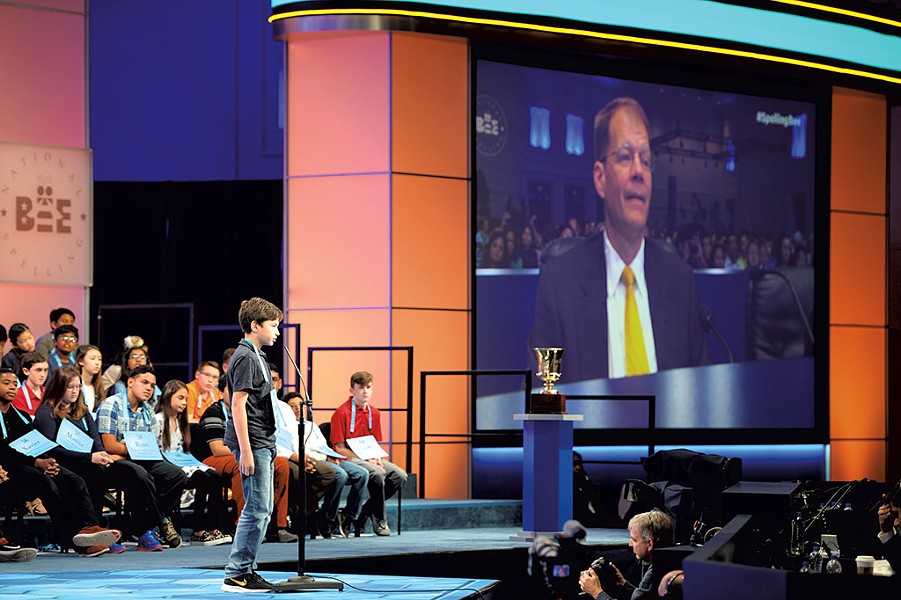 Jacques Bailly knows firsthand the intense pressure facing the 550-plus students who, once a year, stand onstage in front of him as they try to spell obscure English words while an audience of millions watches live on TV. Bailly, who's been the official pronouncer of the Scripps National Spelling Bee since 2003, won the event in 1980 as a 14-year-old eighth grader by correctly spelling "elucubrate," a verb meaning to produce a written work by working long and diligently.

When a reporter mispronounced it "ee-LUCK-you-brate" during an interview, Bailly gently corrected him with the dictionary's preferred pronunciation, "ee-LOO-cue-brate."

"But a word like this you can say however you want, and you're right," he added. "It doesn't get pronounced much."

Indeed, Bailly, a University of Vermont associate professor in the classics department, admitted that he's never used the word elucubrate since and includes it in the category of "ghost words," or those that are rarely, if ever, used but still appear in dictionaries and reference books.

The annual Scripps National Spelling Bee, one of the nation's oldest and largest spelling competitions, is awash in such obscure vocabulary. Spelling these words can floor some competitors. In 2004, Bailly read the word "alopecoid," meaning fox-like, to 13-year-old competitor Akshay Buddiga, from Colorado Springs, Colo. Before the boy could answer, he swayed sideways and fainted — then quickly got back on his feet and spelled the word correctly.

"We had another kid who got 'Sardoodledom,' who found that word so funny he could barely recover, he was giggling so hard," Bailly recalled. He, too, finally pulled himself together and got it right.

Such grace under pressure, Bailly said, is really what the Scripps National Spelling Bee is all about. Competitors, who cannot be older than 14 nor beyond the eighth grade, have worked their way to the top of a pool of more than 11 million spellers from around the world. To get there, they've invested thousands of hours studying for the event, which carries a grand prize of $40,000, a $2,500 savings bond and hundreds of dollars in reference materials from Merriam-Webster and Encyclopaedia Britannica.

"The top ones in the spelling bee are just getting better," he said. "It's harder and harder to get a winner because they study so hard ... and very intelligently. They look for the roots of words and try to figure out what language they're from."

What traits characterize good spellers? Heavy exposure to foreign languages is a common one Bailly sees among many of the spelling bee's top competitors. Another is a voracious appetite for reading, which enhances their recognition of uncommon words and unusual spellings.

As the name suggests, Bailly's job as official pronouncer is to read the word's preferred dictionary pronunciation and, if requested by a competitor, any variant pronunciations. Spellers may also ask Bailly to define the word and provide its part of speech, both of which may be helpful in figuring out its spelling. They may also ask him to use it in a sentence. Finally, Bailly can provide them with the word's language of origin, which may offer further clues.

As an example, Bailly (pronounced BAY-lee) pointed to some English words that are derived from the Hawaiian language, such as "wikiwiki," which means quickly. As he explained, Hawaiian words often share common traits: They have few sounds, but those sounds are usually spelled the same way. Hawaiian also features a lot of repetition, or reduplication, as Bailly demonstrated using a word he's often asked to spell: humuhumunukunukuapua'a, which is the official state fish of Hawaii.

The 53-year-old Denver native was introduced to spelling bees by his sixth-grade Catholic school teacher, Sister Eileen Kelly, who often gave his class spelling tests. She then asked the best-performing kids if they wanted to join the school's spelling team.

Bailly, whose father came to the United States from France in 1948, already spoke French by that age. An avid reader with a good memory for words, he discovered that he also had a knack for spelling. He went on to compete in the Colorado State Spelling Bee and, from there, in the Scripps Howard National Spelling Bee, as the event was known then.

"I never really thought about the next stage," he recalled. "I just thought, Well, this is a fun contest. Oh, we get to go to another one? Great!"

After college, Bailly was awarded a Fulbright scholarship to Switzerland, where he learned German. He has since studied ancient Greek, Latin, Arabic and Chinese and earned a doctorate in ancient philosophy at Cornell University. In 1990, he wrote a letter to Scripps offering his services to the national spelling bee and was hired as an associate pronouncer.

In 1997, Bailly moved to Vermont to teach Greek and Roman philosophy, Latin, and etymology at UVM. He took over as Scripps' official pronouncer when his longtime predecessor, Alex Cameron, died in 2003.

"People think I know how to pronounce all these words," he said. "I just read the dictionary, and I know the symbols that guide the pronunciation."

In fact, Bailly is no language purist and doesn't necessarily think that the dictionary always has the definitive pronunciation. After one national spelling bee, he recalled, Bailly was approached by a man who was very upset by the way he'd pronounced the word "pilaster," which is a rectangular column that protrudes from a wall. Though Bailly had pronounced it "pill-AS-ter," the man, who told Bailly he'd spent years in the building trades, said that he'd installed more than a thousand pilasters in his career and had always heard it pronounced "PYE-las-ter."

"All I could say was, 'You're absolutely right! The dictionary hasn't caught up to you yet,'" Bailly said. "However we pronounce these words as English speakers is correct. It's not like the dictionary gets to decide."

Bailly has appeared in two films about the Scripps National Spelling Bee: the 2003 Oscar-nominated documentary Spellbound and the 2006 feature film Akeelah and the Bee, in which Bailly portrays himself. At the national spelling bee, he's become something of a rock star or, as Valerie Miller, communications manager for the Scripps National Spelling Bee, described him in an email, a "spellebrity."

But Miller pointed out that Bailly's fame is about more than people recognizing him from ESPN or even his deep knowledge of words, etymology and language. When competitors prepare for the national championship using recorded study materials, it's usually Bailly's voice they hear, so they arrive at the bee feeling as though they know him already.

"The spellers flock to him at Bee Week," Miller added, referring to the weeklong event leading up to the final competition, which will be held this year in National Harbor, Md. "They want to meet him, talk to him and get his autograph.

"He genuinely wants to meet them, too. At our kickoff event and Friday night dance party, he's one of the first ones on the dance floor when music is playing, and he takes the time to meet and talk with as many kids as he can."

Then, once the competition begins, Miller continued, spellers often step up to the microphone with creative greetings for "Dr. Bailly," as he's commonly known — oftentimes in foreign languages. If he can, Bailly will respond in the same language or ask a question about that language.

"He has a heart of gold and a genuine interest in helping each student succeed," Miller said of the father of two. (Bailly's daughter, Isidora, is 17, and his son, Jean-Pierre, is 15. Bailly described them as "not bad" spellers. "We worry more about what words mean, honestly," he said.)

Bailly said he's often asked for advice on how to become a better speller. The first rule, he suggests, it simply to try spelling a word the way it sounds. Why? "Because every letter in a word, at some point, was pronounced," he explained. "Silent Qs are pretty rare, so don't try them."

As for tricks for spelling words you repeatedly misspell, he recommends "overpronouncing" those words, or sounding out every letter, such as saying the T in "often" or the R in "iron" as memory tools.

In an age when smartphones, search engines and word processing programs automatically correct our typos and spelling blunders, why are spelling bees still relevant? Bailly suggested that the Scripps National Spelling Bee is less about spelling words properly than it is about helping kids learn, grow and face adversity.

"It's tough to watch a kid miss a word. But honestly, I think that builds character," he said. "People call it failure, but it's not. We all need to be able to put ourselves out there and take the risk of not getting it right, so that we can get it right another time." When Bailly won the bee in 1980, he got to meet then-president Jimmy Carter, who apologized because his staff had misspelled Bailly's name in the White House program.

Spelling, Bailly added, is "a gateway skill" that introduces young people to countless other subjects.

"You'll never get a Pulitzer Prize for spelling," he said. "But maybe it'll open a child's mind to musical instruments or tropical fish or who knows what. Because there are some really strange words out there, and kids love them ... And helping kids learn is a beautiful thing."

The 92nd Scripps National Spelling Bee begins on Monday, May 27, with the preliminaries test and concludes with the prime-time finals broadcast on ESPN on Thursday, May 30, at 8:30 p.m.