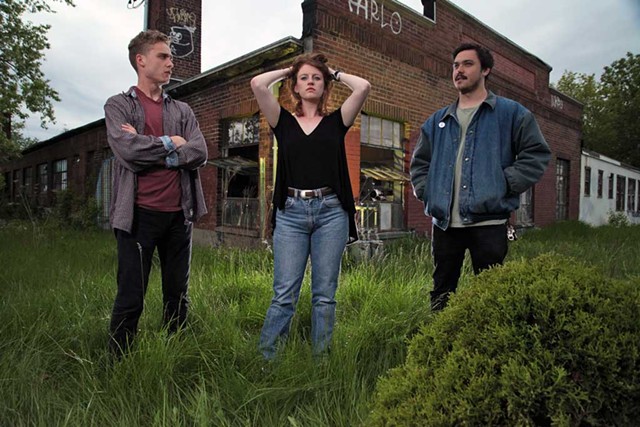 Any Burlington resident who's tried to throw a rager or turn their home into a makeshift nightclub likely shudders at the words "noise ordinance." The city's strict edict on excess sound can burden offenders with heavy fines, and leniency is rare. Local nightlife devotee Betsy Rose Besser is attempting to give the term a new association.

Besser is the founder and creative director of Noise Ordinance, a new, multiplatform media outlet and production company based in the Queen City. She picked the name as a way to reclaim the anxiety-inducing phrase, having fled her share of residential basement shows after unexpected visits from the police.

Noise Ordinance has three objectives: to curate and catalog a selection of noteworthy local talent on its website, to create high-quality studio-session and biographical web videos, and to promote and present local events. Noise Ordinance presents its first show on Friday, May 26, at Foam Brewers in Burlington. Local indie rockers J Bengoy celebrate the release of their new single, "So Good (I Could Die)"; former locals Hammydown (aka Abbie Morin) and argonaut&wasp add support.

"It's been over a year in the making," Besser tells Seven Days at Speeder & Earl's Coffee on Pine Street.

Besser is a marketing assistant at ArtsRiot and works front of house in various roles. The South End restaurant and event hub is also where she did her college internship. Originally from Memphis, Tenn., the red-haired 23-year-old first came to Burlington five years ago to attend the University of Vermont.* At the time, her concept of the local music scene was somewhat shortsighted.

"For so long, I believed this was just a jam-band town," she says. "I was like, 'I'm here to listen to Phish and Mike Gordon, and that's it."

As much as Besser still loves five-hour sets and 30-minute guitar solos, her insatiable appetite for live music eventually led her to the diverse musical bounty that Burlington offers. Many of her discoveries came through her main hobby: concert photography.

"From nine to two, four nights a week, I'd be barhopping, venue-hopping, trying to shoot everything I could," she recalls. "That really gave me a grasp of what's so unique about Burlington."

In the spring of 2016, while completing her internship at ArtsRiot, she felt the impetus to channel her love of local music into an interactive, tangible product. After bouncing some concepts off friends and her supervisor, Rob Liu, Noise Ordinance began to take shape. Since then Besser has put together a full staff, including videographers Kayhl Cooper, Shawn Cimonetti and Patrick Myers; sound engineers Charlie Hill (also of ArtsRiot and J Bengoy) and Curtis Halle; graphic designer Jess D'Amelio; and Liu, who serves as talent buyer. 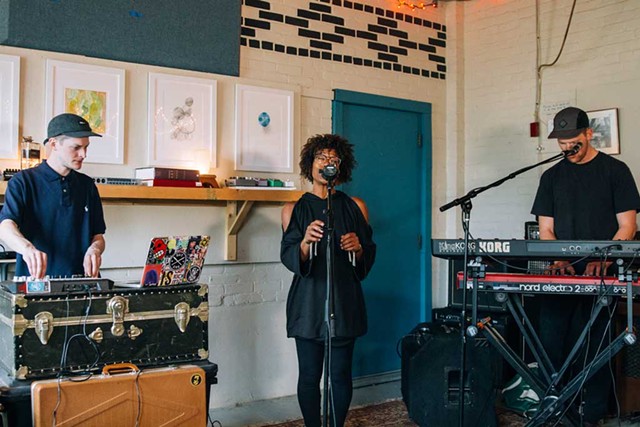 "The [people] behind the camera [are] just as important as the person who's onstage," says Besser. In essence, every component of Noise Ordinance is considered equally vital to its overall vision.

Noise Ordinance's calling card is its impeccably shot, high-quality videos. Artists are featured in a series of live studio sessions, as well as biographical videos, in which the artists briefly explain who they are and what informs their art

So far, Besser and company have chronicled J Bengoy, neo-Americana trio Navytrain, singer-songwriter Ivamae, hip-hop/neo-soul producer Loupo — along with frequent collaborators Steph Heaghney and Danny Whitney — and rocksteady collective Steady Betty, though the last has yet to be released.

Noise Ordinance shoots its session vids at J Bengoy's rehearsal space at Pine Street Studios. Though the viewer doesn't get an official tour, the industrial space is dripping with bohemian charm, including vintage furniture and DIY accoutrements.

Cooper is the director of videography. The 21-year-old Essex Junction native has been working as a freelance videographer since he was a junior at Essex High School. Cooper's website displays a smorgasbord of commercials, concert videos and still photography. He also shot this year's Waking Windows.

Besser roped Cooper into the project after the two met while photographing local folk-rock ensemble Iron Eyes Cody during the band's session with Vermont Public Radio's "Live From the Fort."

Cooper shoots and edits with a light touch.

"I have a very specific idea of what I do and don't want," he says while sitting outside of ArtsRiot. "There are a lot of people who are doing [video production] in a way where the visuals are louder than the music."

Cooper's vision is clear just from watching Noise Ordinance's debut session videos with Navytrain. The cuts are clean and unobtrusive, the angles and close-ups feel intimate, and feather-light zooms add slow-burning intensity to some of the longer shots.

"The cleaner, the better," he adds. "As long as you have great sound and simple visuals, you'll get there."

Once fully staffed, Besser began thinking about how Noise Ordinance could exist beyond the confines of the internet. That's where Liu comes in.

Originally from Philadelphia, the 24-year-old UVM grad is a production manager at ArtsRiot. For the last nine months or so, he's independently booked shows at various venues around the city — though he's never branded his events.

"I toyed with the [name] Bagel Dog Presents," Liu says. The name is a reference to his past life as an employee of Feldman's Bagels. (He was instrumental in helping the shop perfect its signature novelty treat: the bagel dog.)

He says humility held him back on publically taking ownership of his shows.

"I don't really like the idea of self-promotion," Liu says. "I would rather use the connections I have to get bands that I like the shows that they [want] to play."

Once he was able to see the work that Besser, Cooper and the rest of the team had created, Liu decided that Noise Ordinance was the perfect fit for what he'd already been doing.

For now, Noise Ordinance has focused on fairly new and up-and-coming artists. Smalltalker, Navytrain, J Bengoy and Ivamae all released debut EPs in the last year. But that doesn't mean that more established acts are not of interest.

"[We] don't want to limit it to a certain group of people," says Besser. She hopes for the company to eventually represent as many genres and subgenres as possible.

As with most startups, there is currently no money in Noise Ordinance. One potential revenue stream is sponsorship underwriting for video content, though nothing concrete is happening yet on that front.

Where does Noise Ordinance see itself in five years? The team is not really thinking much past the 2017 festival season. But given the company's local connections, impeccable taste and dedication, it's not hard to envision heading over to the Noise Ordinance Festival at Oakledge Park in the summer of 2022.

*Correction, May 24, 2017: An earlier version of this story incorrectly stated where Besser is from. She's from Memphis, Tenn.