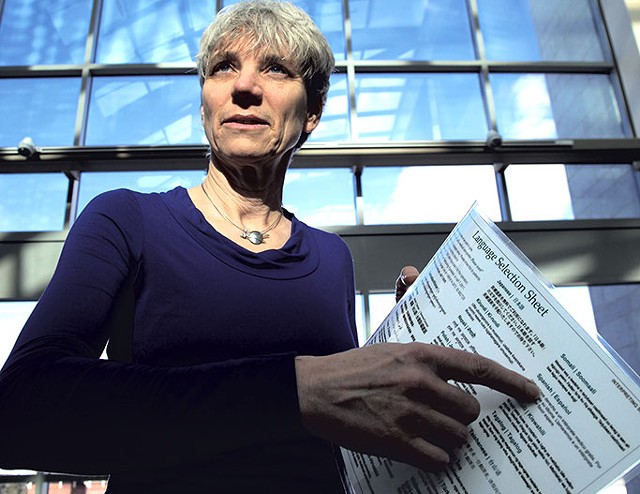 A woman rushes to a hospital after taking her baby's temperature. In English, she tells the nurse that her child has been crying nonstop and is burning up. She begs to see a doctor. The nurse turns to her colleagues and other patients and speaks in an unidentifiable language, presumably asking if anyone understands English. Most give blank stares. A patient speaks a few words to the mother but backs off when he reaches the limits of his English proficiency. By now, the mother is hysterical and desperate.

That's the scenario depicted in a public service announcement video from the Texas Association of Healthcare Interpreters & Translators, produced in 2010. It concludes by telling viewers that 8 percent of U.S. citizens, or 25 million Americans, speak limited English. The video clip is one of an array of materials that Lynette Reep, interpreter coordinator at the University of Vermont Medical Center, uses to educate her colleagues about the challenges that deaf patients or those with limited English proficiency (LEP) face when accessing health care.

To drive home her message, Reep also cites famous cases of tragic outcomes that resulted from inadequate language access. One such incident took place in 1980 in South Florida. Eighteen-year-old baseball player Willie Ramirez became quadriplegic after a misunderstanding of a single word led to a misdiagnosis and erroneous treatment. A resultant lawsuit led to a settlement of $71 million.

Reep's position at UVM Medical Center was created just a year ago; before that, technical training for the clinical staff revolved around use of phone interpreters or an app. "Burlington, historically, is not a community that necessarily had a huge need for interpreting services," Reep said. "But over the last 20 years or so, we've had refugees resettled here."

According to statistics provided by the medical center, the percentage of LEP patients has risen over the past three years from 1.25 to 1.38 percent. Each week, the medical center receives about 16 requests for ASL interpreters and 200 for spoken-language interpreters. The three languages for which interpretation is most often requested are Nepali, Bosnian and Arabic.

Reep, 55, said it is her mission to "provide language access in the interest of patient safety and to educate the organization as a whole about the link between language access and patient safety." This means creating a culture in which trained medical interpreters are seen as part of the treatment team.

"It's really important that patients and providers understand that," Reep said. Even though the interpreters don't provide care, she added, "they are the mechanism through which care is being provided."

Several existing laws guarantee LEP and deaf patients access to interpretive services. Two of them are Title VI of the Civil Rights Act of 1964 and the Americans With Disabilities Act of 1990.

These days, Reep, who was born on Long Island, spends her days liaising with different departments to set up training sessions on effective rapport with interpreters and patients, revamping interpretation policies, and improving communication between the departments and interpretive services. In addition, she continues to interpret for deaf patients and has had a private practice for 30 years.

Refugees aren't the only ones driving the increased need for interpretation. Silvia Del Castillo-Alzamora, who's been a freelance medical interpreter in Vermont for 15 years, noted an increased demand for her English-Spanish speaking skills over the past decade, as well. The South Burlington resident, who moved from Ecuador to the Green Mountain State more than 30 years ago, said most of her clients hail from Spain, Mexico, Central and South America, and the Caribbean islands. A native Spanish speaker, Del Castillo-Alzamora has no problem understanding different Spanish accents and dialects, she said. She's also received training on medical terminology and the code of ethics.

"I am simply a piece of equipment their voice is going through," she said of her relationship with patients. "I don't judge them; I don't get inside their lives. It's not my job."

Medical interpretation has brought Del Castillo-Alzamora into operating rooms, where she sometimes stays throughout a procedure at a patient's request. "The head nurse can be tricky," she said about getting access to the OR, but "I know where to stand so I wouldn't bother them."

Reep has learned from the medical center's clinical staff that some LEP patients prefer to use their own family members as interpreters. "It's very common for a grown daughter to say, 'This is my duty,'" she said. Some family members feel they are neglecting their responsibilities if they don't interpret for a parent or other relative in the hospital, Reep added.

Nonetheless, relying on a family member is not considered a best practice in the interpretive services field, for multiple reasons. First, the potential interpreter is often a care provider at the same time. Second, unreported cases of domestic abuse may be involved. Finally, the family member's proficiency in English may simply not be good enough.

A bilingual hospital staffer is not a good choice for a medical interpreter, either, said Reep, because "you can't do two different jobs at the same time." A bilingual doctor who acts as interpreter for a resident, nurse or patient may find that his or her ability to provide care is compromised. Any provider who wishes to give bilingual care should receive the necessary training and be properly assessed, Reep said.

While deaf patients always prefer in-person interpreters, she noted, some LEP patients from small language communities choose to use phone interpreters, or a digital device. Patients may feel uncomfortable knowing that their relatives, neighbors or friends are privy to their medical information.

"We like having options. We always want to have the electronic fallbacks because of issues of privacy and small communities," said Reep. More importantly, iPads and smartphones are "invaluable for that immediate experience" at the emergency department.

Reep is the medical center's only on-staff interpreter. Spoken-language interpreters are hired through the Association of Africans Living in Vermont and the Vermont Refugee Resettlement Program. "Our contract with them stipulates that they are vetting those interpreters," Reep said. "They trained them, they vet them and they send them to us."

Among the departments that most frequently need in-person interpreters is the New American Clinic of UVM Children's Hospital. "I really cannot do my work without them," said director Andrea Green. "They affect the quality of care we provide. I consider them part of the medical team."

Green, who is also an associate professor of pediatrics at the UVM College of Medicine, has trained interpreters at VRRP.

And she isn't a passive consumer of their services. When a conversation between an interpreter and a parent takes longer than seems necessary, for example, Green respectfully asks what the conversation is about. If she doesn't get the answer she's seeking, "You just keep asking questions," Green said. She has also begun giving Reep feedback on the quality of interpreters her clinic sees and has trained interpreters in completing medical forms.

Having worked at the New American Clinic for more than a decade, Green has picked up some words of Nepali and Somali, she said. Her ears perk up if she doesn't eventually hear an interpreter say the English word she expects.

She's also dealt with delicate situations in which patients' parents ask not to have an interpreter. "I have mums who just spent forever working on filling out forms by themselves," Green said. "They are so proud about their ability. I want to celebrate that." In such instances, she reminds parents to speak up if they don't understand words she uses. Another way to ensure comprehension is the teach-back method: asking parents to explain instructions or information as a way to check their understanding.

Reep echoed the physician's sentiments to the effect that, while respecting a patient's wishes is important, so is providing quality care. Sometimes, both suggested, one must explain to patients that interpreters are there to help medical staff, too.

Each year, the medical center gets partial reimbursement from Medicaid for hiring interpreters. With or without such help, though, Reep said, providing interpreters for patients is simply "the right thing to do."