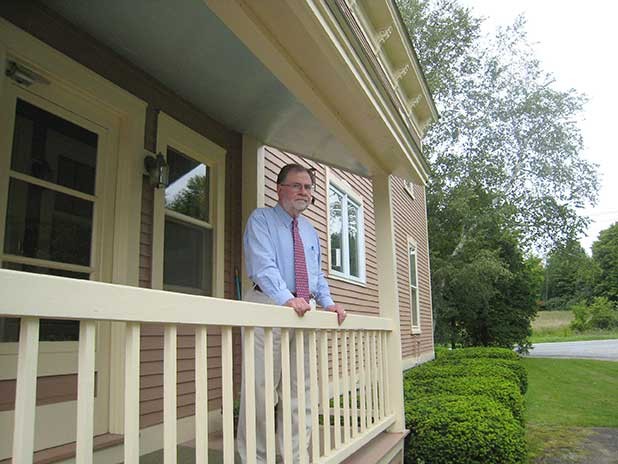 Although he retired from Middlebury College in December 2007, political scientist Eric Davis is still very much at the head of the class - the political class, that is.

But rather than the best and brightest minds on the Middlebury campus, where Davis taught for 27 years, his current students are reporters, politicians and the public.

While University of Vermont professors Garrison Nelson and Frank Bryan are regularly called upon by reporters, neither of them enjoys the media profile of Davis, who seems to crop up in every form of media, offering his insights on national and local politics.

Bespectacled, bright-eyed and bearded, Davis has been a fixture on WCAX-TV's election-night coverage since 2002. He is also a regular on the "Mark Johnson Show" on WDEV-FM in Waterbury.

Johnson has been calling on Davis since the mid-1980s. Back then, Johnson was the city-hall reporter for The Burlington Free Press, covering Mayor Bernie Sanders, as well as some of the statewide political races.

Johnson said one key to Davis' success is his encyclopedic mind for political facts and information, which he uses to support his analysis. Nor is Davis the kind of guest who insists on knowing what questions will be tossed his way during a live interview. That may explain why the most downloaded episodes of Johnson's radio show feature Davis.

Davis attributes some of his more recent visibility to Vermont Public Radio, which, he noted, boosted its political coverage in the late 1990s. "My sense is, from talking to people around the state," he says, "is that my appearances on VPR have had the most impact."

Davis was first called to analyze a political race for the media in 1984. That was the year Democrat Madeleine Kunin narrowly bested Republican attorney general John Easton to become the first woman governor of Vermont. Twenty years later, Davis became a key go-to guy for insight on Gov. Howard Dean's run for the White House. "The national media needed someone in Vermont to tell them who is this guy running for president, and put Dean in some kind of context," Davis recalls.

He has his own theory about why he's become such a popular source. After years of following Vermont news, Davis has a good understanding of the state's politics and election law. His institutional memory is unparalleled - he maintains electoral statistics dating back several election cycles on his computer.

Davis also has a feel for what reporters need. He makes a point of returning phone calls promptly, and he can explain politics - and politicians - clearly and concisely.

Equally important, he adds, "I'm not affiliated with any political party, and I think people see me as not having a partisan axe to grind."

Johnson, the talk-show host, agrees. After years of calling on Davis to opine on state politics, he's still not sure if the former prof's personal views lean conservative or liberal.

Eric Davis was born in Boston and grew up an only child near Randolph, Mass., where he attended public schools. His parents - his father worked for a wholesale pharmaceutical company; his mother was a homemaker - subscribed to both The New York Times and The Boston Globe, and Davis started reading both when he was just a kid.

He got his first card at the Boston Public Library when he turned 12. His mother took him there regularly until Davis entered high school, when he could trek into Boston by himself to visit the library and attend the occasional afternoon ballgame at Fenway Park.

"The reading room certainly contributed to my intellectual growth as a teenager and made me gravitate toward academics," he notes.

Davis says the 1960 election between John F. Kennedy and Richard Nixon left an indelible impression on him. However, he didn't get hooked on politics until he went to Brown University. He was unsure of his major until he met professor Elmer Cornwell, a scholar on the U.S. presidency and electoral process, and Rhode Island politics.

"His classes were about real political process," Davis recalls. "He was active in the Democratic Party in Rhode Island and was also the parliamentarian of the Rhode Island legislature, and while he was teaching us theory, he was dealing with politicians in the real world."

After Brown, Davis attended Stanford University for graduate work, coming back east to Washington, D.C., for a year to work on his dissertation. There, he interviewed people about the legislative office of the Johnson administration. He returned to Stanford to complete his graduate work, teaching briefly at the University of California at Berkeley.

Though he liked the Bay Area, Davis says he wanted to return to New England to teach. In 1980, the right position came along at Middlebury. In his nearly three decades at the school, Davis says he watched the political sensibility and activity of students ebb and flow. "During the '80s there was a lot of political activism among students and it had a lot to do with world events," he surmises. "After the fall of the Berlin Wall, the fall of the Soviet Union, and during the Clinton years, I would say there was relatively less interest in politics. But since 9/11 and the Iraq war and the Bush elections, the interest has skyrocketed."

Davis' passion for politics has rubbed off on a few of his charges. Among the most notable of his former pupils is Ari Fleischer, George W. Bush's first White House spokesman. "Ari took at least one seminar on the presidency," Davis remembers. "I would say he wasn't noticeably conservative, and what I remember about Ari is, he was very, very interested in politics from the get-go. It was no surprise at all that he went right into political work after he graduated."

Andrew Savage, the communications director for Democrat Rep. Peter Welch, is another of Davis' star pupils. Savage took several classes with Davis at the helm, and has kept in touch with his old professor, whom he recalls fondly.

"From a 200-year-old stone chapel in Middlebury we were discussing the world's electoral systems and what was making the politics and the political systems of the world work or not work, and using real-life examples," Savage remembers. "Often when you're studying liberal arts, it is largely a theoretical discussion."

In addition to his work in the classroom, Davis held a number of administrative posts at Middlebury, including dean for academic planning, vice president for information technology, and secretary of the college. He was also involved in numerous research projects. "Now," he says, "I'm retired and now working for myself and that's a lot of fun."

Polite and informative when discussing politics, Davis seems almost uncomfortable talking about his private life. His wife Kitty, a music teacher to whom he has been married for 23 years, also retired last year. The couple, who have no children, live in Cornwall, three miles from the Middlebury campus, in a Victorian home with easterly views of Breadloaf Mountain.

The neatly kept home is surprisingly devoid of a political scientist's tools of the trade - stacks of newspapers, shelves of biographies, political memorabilia. The rooms open to visitors are filled with displays of fine china, cut glass, music books, CDs and two pianos.

Beyond politics, Davis has a love for the Sunderland Black Cats, an English football club, medieval English cathedrals, and trains. "I would like to ride every mile of track in England where there's passenger service," Davis says. "I'm more than half of the way there."

His interest in English medieval cathedrals started about 10 years ago. Davis and his wife have visited more than 25 of the 40 cathedrals, and he taught a class on the subject in his last two years at Middlebury.

Now that he's retired, Davis is contemplating writing a book comparing the British Labour Party and the American Democratic Party, and how, after years in the political wilderness, they reformed themselves in the '90s to become governing parties.

Davis keeps abreast of political events around the world by maintaining a rigorous daily news-reading regimen. While The Wall Street Journal is the only newspaper he has delivered to his door, Davis spends four to six hours online reading American, British and Canadian papers. He listens to VPR, watches WCAX-TV, and reads the state's three major papers. He also checks in regularly with two Vermont blogs, the liberal Green Mountain Daily and the conservative Vermont Tiger.

But, to keep all that information fresh and ready for the moment when a reporter calls takes some effort. So, while Middlebury College students get ready to start classes and have their minds opened to new ideas, Davis will be studying right along with them, preparing for the first Tuesday in November.

Like every college professor, Eric Davis understands the importance of research. Here's what he reads, watches and listens to nearly every day to stay on top of the political world: