Mean Gene? Report Citing Verbal Abuse by BTV Airport Director Is No Surprise to Some

The City of Burlington concluded its investigation into aviation director Gene Richards late last month with a damning report. Penned by a third-party investigator, the report says Richards regularly used profanity and "physically intimidating behavior" against Burlington International Airport employees and called them "useless and ungrateful to their face." The verbal abuse was so damaging, the report says, that many employees have left or are considering leaving.

Burlington Mayor Miro Weinberger, who hired Richards in 2012, expressed surprise at the report's findings and said he'd never witnessed such behavior. He's now calling on the department head to step down, though Richards has refused.

"I didn't think the Gene Richards that I knew would conduct himself this way," Weinberger said, days after he had made the city's report public. "It was not what I expected of Gene."

But to others who worked with Richards, the report's findings aren't a surprise. In recent interviews with Seven Days, two South Burlington city councilors recalled being on the receiving end of Richards' temper, and an airport employee who'd worked there 10 years said he recently left his job to escape Richards' toxic leadership.

Their experiences lend credence to the city's position ahead of what the mayor's spokesperson says is an unprecedented termination hearing scheduled for Thursday, September 9, when Richards will publicly fight for his job. His fate rests on a vote of the city council: According to rules in the city's charter, eight councilors, or two-thirds of the 12-member body, must agree to fire him.

Richards' attorney, Rich Cassidy, has asked the city to postpone the hearing because he says the process has been rushed. Councilors can decide at the scheduled hearing whether to heed his request.

Richards, who has been on leave since late June, said he thinks the allegations were levied by disgruntled employees who were passed over for promotions or who otherwise held a grudge. He said after nine years leading BTV — during which he shored up the airport's finances and shepherded several infrastructure projects — he deserves another chance.

But his boss, and 34 unionized workers who signed a petition calling for Richards' firing, disagree.

"To me, it's very clear that there's no way for Gene to return in the role that he was in," Weinberger said. "It's sad. It's unfortunate. But I think it's the reality that his actions have brought upon us."

The city's wide-ranging investigation started in early June, when members of AFSCME Local 1343, the union that represents airport staff, filed a grievance about Richards' behavior toward employees. Weeks later, a Federal Aviation Administration worker reported that Richards had been fueling up his personal vehicle at the airport's gas pumps.

The city placed Richards on leave and hired workplace investigator Anita Tinney, who interviewed 11 witnesses, including former and current airport staff and other city employees, and reviewed 1,500 pages of documents. After a two-month probe, she concluded that while Richards made some questionable decisions — including to hire a distant relative and rent a home the airport had acquired to a city employee — none of them expressly violated city policy. His treatment of subordinates, however, did.

"He clearly worked to put the airport in a better place, but the cost of business should not be this fear." Meaghan Emery tweet this

While the airport is owned and operated by the City of Burlington, it's located in South Burlington, meaning officials in both cities must collaborate on certain issues. South Burlington City Councilor Meaghan Emery said that in December 2015, Richards invited her to the airport to discuss noise from planes, including the F-35s that were to be based there. When he walked out of his office, though, he started laying into her.

"Without even saying hello, he — with just a very loud voice — yells at me and says, 'Stop being so negative' and 'How dare you come in here and demand to see us!'" Emery told Seven Days in a recent interview. "I just sat there with my jaw on the floor."

Emery later learned that Richards had emailed her to cancel the meeting, just 10 minutes before it was to start. At the following airport commission meeting, then-council chair Pat Nowak publicly apologized for Emery's behavior, prompting Emery to defend herself in a written statement. The dispute is documented in meeting minutes from both the commission and the council.

Emery assumed that Richards' behavior was purely political — she was an outspoken critic of the jets, and he supported basing them at BTV. But after reading about employees' experiences, she said, she realized that his outbursts were part of a pattern.

"He clearly worked to put the airport in a better place, but the cost of business should not be this fear," Emery said. "I know what I felt when he did it to me. You felt just like a storm had passed over. I was shaken by it. And that should not be tolerated."

Emery said she relayed the conversation to then-South Burlington city manager Kevin Dorn, who did not respond to an interview request. 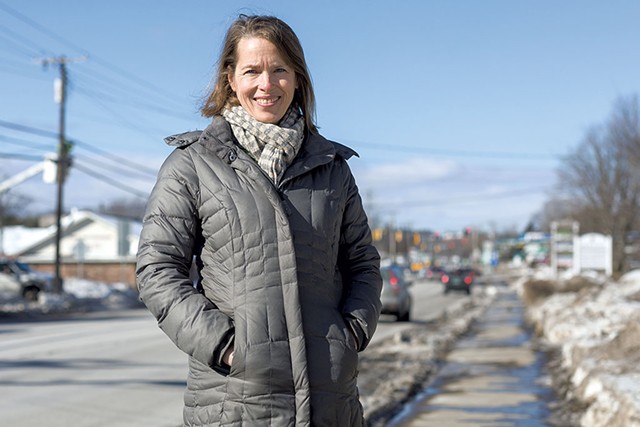 One of her fellow councilors, Thomas Chittenden, said he, too, discussed airport noise with Richards. On one such phone call, Chittenden said, Richards quickly became "very curt, very dismissive and very angry" and "even used some curse words."

"From what I see and what I know about this, the mayor is right to ask to terminate Gene Richards," said Chittenden, who remains a councilor and is now also a state senator.

South Burlington City Council chair Helen Riehle, who serves on the airport commission, said she only once saw Richards "get hot under the collar," during a public meeting about airport noise some years ago — but not to the extreme described by her council colleagues. Riehle said she's conflicted over whether Richards should stay or go. He's improved the airport, won federal grants and attracted new airline service routes, but if the allegations are true, Riehle said, "you can't run an organization with that [as] such a piece of the culture or environment."

Burlington Airport Commissioner Jeff Munger, who recently stepped down as chair, wouldn't comment on the Richards report, nor would Bill Keogh, a longtime Burlington resident and politician who now chairs the commission. Representatives from AFSCME Local 1343 said members would not speak publicly until after this week's hearing, and most of the dozen former employees Seven Days contacted declined an interview or didn't respond to requests for comment.

Stephen Gragg, who spent close to 10 years working at BTV, was the exception. An operations specialist who ensured that the airport complied with aviation regulations, Gragg said he planned on spending his career in Burlington but became disillusioned as he watched Richards drive out good employees, including a manager whom Gragg highly respected. Gragg, who served as union steward before he quit in February, said employees regularly recorded conversations with Richards because they didn't trust him to keep his word. Gragg would not say whether he has any such recordings.

"Everything in that report was just the surface," Gragg said.

For his part, Richards said he doesn't remember yelling at Emery but acknowledged that they frequently disagreed. "A lot of interactions with Meaghan are challenging," he said. "She says things that aren't always necessarily the truth."

Richards was less inclined to discuss Gragg, only saying he "worked hard" with Gragg and "every other employee." Richards also disputed how the report characterized him as a power-wielding "big dog," unwilling to listen.

"When I go to bed at night, I try to think of what I can do better," he said. "When somebody is not happy with me, I'm like a Labrador, not a Doberman. I really believe in trying to get it right. I believe this process didn't have any of that in it. This is like, You're wrong, because they said you did this."

Richards' attorney has also raised concerns about the investigation. On Monday, Cassidy sent city attorneys a letter alleging that the city is withholding "exculpatory material" from his client, including Richards' personnel file, the AFSCME petition and documents reviewed by Tinney. Cassidy said he filed a public records request for the documents, which the city said it would supply "on a rolling basis up to and through September 13" — after Richards' termination hearing. The report that was released to the media and to Richards' team in late August was only Tinney's summary; the full, 13-page report, with redactions, was provided to Richards on September 2.

Cassidy has asked the city to delay the proceedings until Richards can review the evidence against him. The attorney has also suggested that the hearing's format — each side will have just 15 minutes to make their case — is unfair and has asked for a four-hour hearing to be scheduled at a later date.

Several people who know Richards have come to his defense. Ronald Bazman, a retired air traffic controller for the FAA, said he never saw Richards treat employees poorly in the more than three years he worked in Burlington. Bazman called Richards a firm and passionate leader, a "doer" whose tough decisions probably upset the rank and file. He questioned why Richards' alleged conduct wasn't brought forward sooner if it was so commonplace.

"The story is somehow being embellished," Bazman said. "It was always my experience with Gene that he was doing the right thing for the right reasons."

Erin Desautels gave a similar testimonial. Her business, Accelerate Vermont, has been based at the airport for six years. In that time, Desautels said, she never once witnessed Richards denigrate anyone or display anger. "It feels like a character assassination," Desautels said, calling the report "vague and unspecific."

"This whole thing is just incredibly troubling to me," she said.

Ranjit "Buddy" Singh has worked for Richards for nearly 30 years, first at a bank and now as a broker for Richards' side business, Spruce Mortgage. Singh said he's had a handful of "heated discussions" with Richards but that he's always emerged a better employee and person for it. Singh, who called Richards a role model, broke into tears recalling how Richards supported him when his mother died in April 2020.

"That's the type of leadership I want out of my manager, out of my boss. That's the person he is," Singh said. "He is a very good man, and he cares so much for the people around him, the organization he works for, and that's the thing that's upsetting."

Singh lamented that Richards isn't being given a second chance. Richards, too, has said he's hurt that Weinberger, who served with him on the airport commission before becoming mayor in 2012, wants to fire him instead of help him become a better leader. "If I'm so bad, why isn't he coaching me?" Richards asked.

Weinberger, however, has little patience for those questions.

"Department heads shouldn't need me to tell them it's wrong to humiliate their employees in front of their peers," he said. "To me, it's one of a number of indications ... that [Richards is] not really taking full responsibility or accountability for his actions."