What's better on a cold winter night than a steaming bowl of French onion soup? With roots in ancient Rome, the dish became popular in the United States in the 1960s thanks to Julia Child. With rich, luxurious flavors created from simple ingredients, this restaurant favorite is worth making at home.

The only difficult part is the long, careful process of caramelizing the onions. You want the natural sugars in the onions to brown and sweeten, but you don't want the onions to burn. It is a tricky balancing act that creates something truly magical. I used a mixture of sweet and yellow onions, with a couple of shallots thrown in to add depth of flavor.

While the onions were caramelizing, I jazzed up a store-bought beef broth by simmering it with parsley and mirepoix — a mixture of carrots, onions and celery. This makes store-bought broth taste more like homemade. If you want to make a vegetarian soup, use vegetable broth instead of the traditional beef.

Once the onions are caramelized, it's a simple matter of deglazing the pan with dry white wine (you could also use water with a little apple cider vinegar, but using wine is the traditional method, and the alcohol cooks off), then simmering the onions in the broth. Finish the soup with a crispy piece of toasted French bread and lots of melted cheese. (The traditional cheese is Gruyère, but I used a mixture of French Comté and a cheddar/Gruyère blend. You could also use Swiss.)

Stick in a spoon and scoop out a piece of bread with a bit of broth — and, of course, that ooey-gooey cheese — and you can enjoy this restaurant classic without ever leaving home. 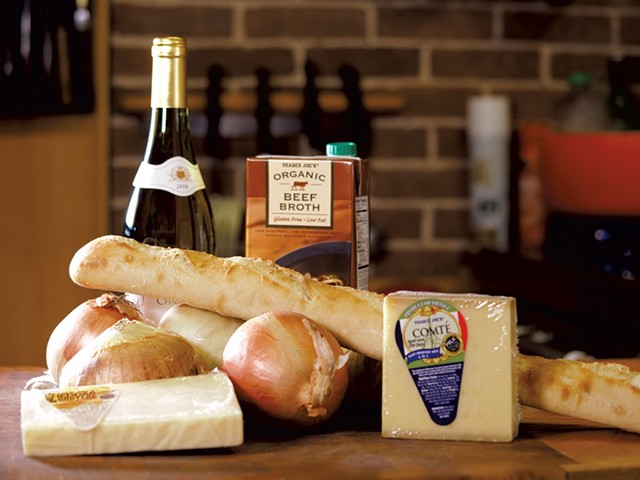