Me Time: A Free Webinar Series Provides a "Personal Tune-Up" During the Pandemic 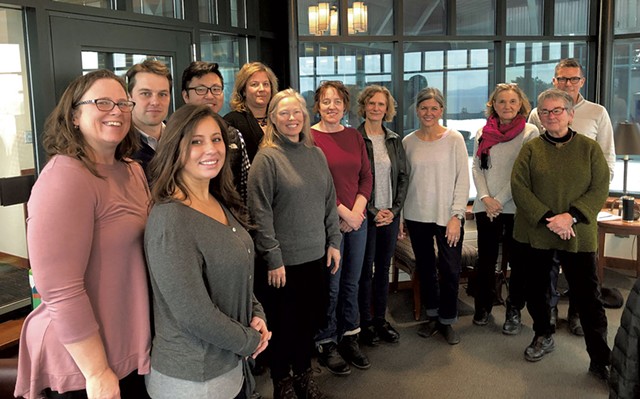 Two months ago, as the coronavirus pandemic started affecting daily life, therapist Bradie Hansen said she became aware of a growing sense of shared stress and anxiety, something she hadn't felt since the terrorist attacks on 9/11.

"Especially in the beginning weeks of social distancing/quarantining," she said, "it felt like every day there was a new bit of information to take in, make sense of, assimilate and adjust to."

Hansen, whose office is in Burlington, had to get used to working from home in Shelburne alongside her husband — who was also working from home — and their two children, ages 9 and 12. She had to manage herself and her own anxiety, parent effectively, and serve her clients.

A Star Wars fan, Hansen likened the process of managing her own emotions to "Jedi training." She imagined herself as Luke Skywalker on Dagobah during the Empire Strikes Back, levitating rocks with his mind while doing a one-hand handstand, Jedi Master Yoda perched atop one of his upturned feet. In the movie, Luke maintains that position for just a moment before everything comes crashing down, but Hansen really needed to stay balanced.

So she was excited to hear about a new free web series from the Vermont Center for Family Studies called "Stuck Together-Stuck Apart: Family Success During Quarantine." Launched in April, the series consists of hourlong Zoom sessions that include a lesson from the center's faculty or an outside researcher, as well as an opportunity for short breakout discussions and a Q&A.

The webinars began as a tool to help therapists and others in "helping professions," said center director Erik Thompson. But they're also open to clients and family members, some of whom have attended multiple sessions. Topics such as "Quarantine Parenting" and "Couples in Quarantine" appeal to a wider audience.

Hansen likened the free webinars to "a personal tune-up," an opportunity to refocus herself and hear smart people grapple with the intense challenges we're all facing right now. "Talking about all of this normalizes the amount of anxiety that people are feeling," she said.

The presenters often discuss how they apply the material to their own families — or how they struggle with that. Hansen appreciates their candor. The sessions, she said, are "just super relatable."

'More Helpful Than Anything Else'

The webinars, like all of the Vermont Center for Family Studies programming, are grounded in Bowen Family Systems Theory, developed by psychiatrist Murray Bowen (1913-1990). At its core, this approach is a way of thinking about how families and groups of people function.

The Vermont center is part of a national network of similar organizations devoted to studying and teaching Bowen's theory. Founder Ann Bunting received degrees from Harvard University and the University of Maryland before studying with Bowen at the Georgetown University Family Center. Bunting moved to Vermont in 1985 and began running conferences and seminars about Bowen's work in 1989. She brought together a group of her students to found the nonprofit center in 1997.

Thompson, the center's current volunteer director, is a leadership psychologist who traces his involvement back to Bunting. She changed his life. "I wouldn't have this whole career without her," he said.

Years ago, Thompson was having marital problems. "I was kind of on my knees," he confessed. A trained psychologist, he was using all of his skills to improve his marriage, "and everything I learned was making it worse."

Bunting introduced him to Bowen Family Systems Theory, which treats the family or the group of people as the client, rather than just the individual. "It was more helpful than anything else I'd ever encountered," Thompson said. The big insight: He had to better understand the role he was playing in the things he wished would change.

"There's a famous story about Ann Bunting," he said. One day, she was approached by an adult woman who complained bitterly about her mother and their toxic relationship. Bunting asked the woman, "How would you rate yourself as a daughter?" In other words, each individual plays a role in a family dynamic.

Bowen theory encompasses eight concepts, such as Differentiation of Self, Triangles and Nuclear Family Emotional Process, as well as some background "assumptions. The latter include Chronic Anxiety, Basic Life Forces and Family as an Emotional Unit. All of these are detailed on the Vermont Center for Family Studies website.

If that makes your eyes glaze over, don't start there; try watching one of the webinars instead. They're all available for free on the center's YouTube channel. The useful and timely lessons might help you think differently about the dynamics in your own currently overcrowded household.

For example, the "Couples in Quarantine" session on May 7 started out by pushing back on the advice contained in an April New York Times article, "How to Get Your Partner to Take On More Emotional Labor." The article advises that the first step in this process is to talk about it.

But just "throwing talking at the problem" isn't enough, said presenter Sarah Davis, a psychiatric nurse practitioner and a center faculty member. Often, she said, one partner in a relationship says to the other: "I really want to do this differently. We just had an argument. Let's prevent this from happening next time — and here's what I think you might do better. That's essentially what we're often saying, right?"

Davis recommends a different approach, starting with owning the role you play in the problem. Her second slide explains some tips for "effective processing": "I take responsibility for my part in this. I am responsible for myself and how I feel. I can tolerate my discomfort without blaming you for it. I am responsible for calming myself down."

Reminders like these are helpful to Hadley Abernathy, director of children, youth and families at the Charlotte Congregational Church. Abernathy has been involved with the center since 2004 — in fact, Ann Bunting is her mother-in-law. Her family connection notwithstanding, Abernathy has found the center's programming useful and has appreciated the prompts to focus on herself. After all these years, Abernathy said, she still needs a reminder that, to get a difficult situation under control, "the most powerful thing is to manage self — and it's really hard."

She and her husband are both working at home in South Burlington accompanied by their three children, ages 6, 10 and 13. Abernathy said the webinars make her feel optimistic: "I can get through all of the frustrations if I can just manage myself," she said.

She also pointed out that, for her, the sessions are a time "to reflect and calm down a little bit. It's like prayer or anything else," she said. "It's just an hour of being exposed to the deep wisdom they have at the center."

Another attendee, Sue Wiles, no longer has kids at home, but she has also found the webinars useful. "To me, they bring a sense of calmness to this wild time," she said. "It sort of gives me a different road map of how I should be driving at this time."

Wiles is not a therapist — she's the center's bookkeeper and assists with organizing conferences. But she's equally invested in Bowen Theory. Like Thompson, she traces her involvement back to Bunting.

Years ago, when Wiles and her husband had teenagers at home, they were looking for someone to help them navigate some family issues. Two different people in her life, unknown to each other, recommended that Wiles see Bunting. She followed up on the suggestion, which turned out to be a good one.

Now that their kids are adults, she and her husband are quarantined together, just the two of them. The hourlong sessions help her consider her own responsibility in the couple relationship and "how to keep going on a smooth path."

In addition to the free webinars, the Vermont Center for Family Studies hosts regular conferences on Bowen Theory. The next one, "Perspectives on Family Theory and Psychotherapy," takes place on the morning of June 5. Like the webinars, it will be conducted virtually, though it will require an attendance fee.

The short presentations cover a variety of topics and provide a primer on Bowen Theory. This year they include: "What Is Bowen Theory?" "Depression, Neuro-Inflammation and Bowen Theory" and "Perspectives on Rewiring the Anxious Brain From Bowen Theory and Neuroscience."

By the beginning of June, Vermonters could be stuck in the house a little less. Regardless, the free weekly webinars will continue.

This Thursday, May 14, the presenter is Dr. Laurie Lassiter, a researcher from Amherst, Mass., who will speak about the neuro-physiology of connection. Thompson described the talk as "more geeky" than some of the others. It will delve into a study that used fMRIs (functional magnetic resonance imaging) to identify regions of the brain that activate when a research subject feels lonely.

If nothing else, said therapist Bradie Hansen, the session will be a chance to allow yourself space and time to think about the relationships you have with the others in your household and how you might be affecting them.

The Bowen Theory perspective "gives people access to a sense of agency," she said. There are things you can do to improve your situation. In these uncertain times, that's a powerful message.