With just two and a half weeks until he takes office, Mayor-elect Miro Weinberger rolled out his transition team Thursday morning at a city hall press conference.

Weinberger said the group — a mix of elected officials, campaign staffers and behind-the-scenes political types — would be “tasked with the important job of converting this optimism and goodwill and desire for change into a successful start in the new administration.” 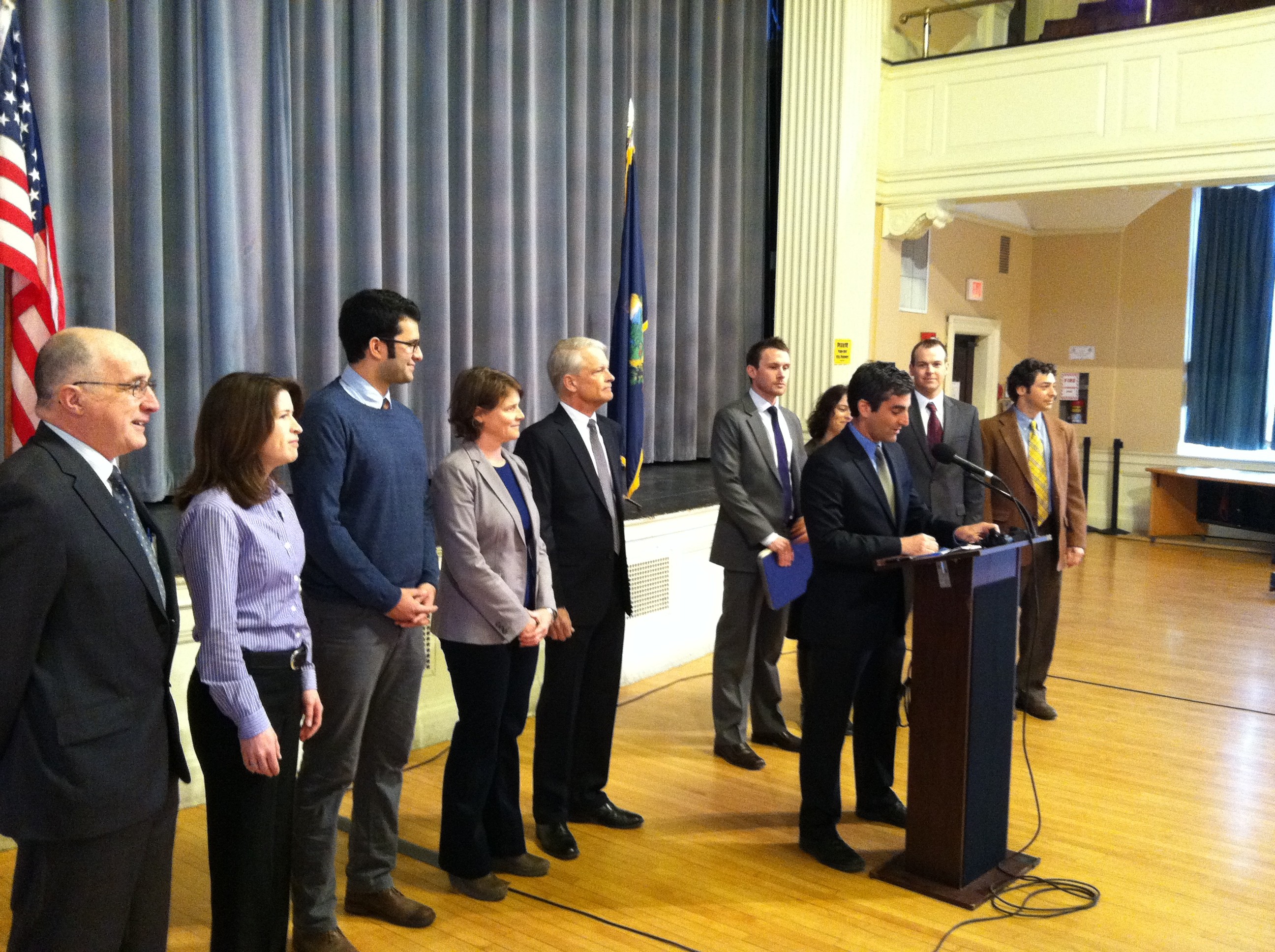 While Weinberger was mostly mum about specific city hall appointments, he indicated that Sisson is one of three contenders for the chief administrative officer position, a key post that is now vacant. Weinberger said that while the mayor has authority to hire roughly 20 positions, “The actual number of appointments in the beginning of the administration will be well less than that.”

He said he would likely seek to retain some appointees from outgoing mayor Bob Kiss’ administration.

“I’ve also made it clear I don’t intend to clean house for the sake of cleaning house. There are many public servants in the city that have done good work for the city for a long period of time, and who I hope will continue,” he said.

Though Weinberger said he held a “warm and productive meeting” with Kiss on Wednesday, Sisson wasn’t exactly effusive about the outgoing administration’s progress completing next year’s budget.

“What we’ve found is that the budget is far behind where it should be at this time of year,” he said. “Near term, we really need the acting CAO to get done what he’s gotta get done before we really can take some solid steps towards finalizing a proposed budget.”

Sisson suggested that city hall had been distracted by the election season and the ongoing Burlington Telecom debacle — and hamstrung by staffing vacancies.

“It’s just my speculation that they’ve been drawn into other things: pressing matters that the existing mayor is trying to resolve before he leaves office and things of that nature,” he said.

Interim CAO Scott Schrader did not immediately return a call for comment.

Asked whether he would focus more on cutting city services or raising revenue in order to meet a projected $700,000 budget deficit, Weinberger said his team is considering both — though he is optimistic the deficit may be smaller than the Kiss administration anticipated.

“We’re certainly reviewing those assumptions, and there is a sense that the economy may finally be starting to turn in the right direction and next year’s budget may benefit from that,” he said.

Sisson was far less sanguine, noting that the original projection did not include an expected hike in the city’s health insurance costs — so the budget gap could actually widen.

“My understanding is there are certainly costs that have not been put into the budget, including the estimated health care insurance costs for fiscal 2013,” he said.

Four of the eleven members of Weinberger’s transition team come from his campaign staff: campaign manager Jessica Nordhaus, spokesman Mike Kanarick, field director Jaafar Rizvi and event planner Deb Lichtenfeld. They will continue to be paid by the campaign, Weinberger said, and are under consideration for city hall jobs.

Weinberger and his team will be working out of vacant office space at 77 College Street donated by campaign supporter David Farrington, president of Shelburne-based Farrington Construction. According to Kanarick, Farrington donated $1,000 to the campaign in the closing days of the race through $250 checks from four companies he controls: Brownell, Hawley Block; Brick Box Co.; Box 77; and Sticks and Bricks. Kanarick said he was working to determine the value of the space and how the in-kind contribution would be reported.