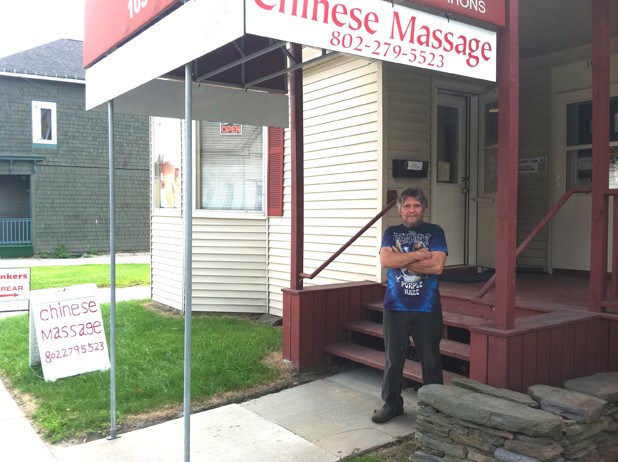 Bai Xiu Zhen speaks almost no English. But the language barrier doesn’t stop her from expressing how she feels about negative portrayals of her Barre massage business.

On July 1, the 46-year-old Bai and Millard opened Chinese Massage at 103 South Main Street. The couple advertised their business with a simple, hand-lettered sandwich board on the sidewalk outside the storefront they share with a two-way-radio equipment dealership. The place stays open late seven days a week, but displays none of the security measures — cameras, electronic doors and obscured windows — typical of illegal massage operations.

Just three weeks later, Barre Mayor Thom Lauzon asked the city council to consider an ordinance regulating professional massage therapists in the Granite City. Lauzon said the measure was prompted by the Seven Days story about three Chittenden County massage parlors suspected of criminal sexual activity and possible human trafficking. All three establishments closed within two weeks, as did a fourth not named in the original story. The landlord of one of the businesses, Harmony Spa in Williston, was later criminally charged for his alleged involvement.

In central Vermont, WCAX, WPTZ and the Barre-Montpelier Times Argus covered Lauzon’s efforts. Some of the television footage juxtaposed images of the suspect massage parlors in Chittenden County with those of Barre’s new Chinese massage business. One showed Bai hiding behind a door to avoid the TV camera.

None of the stories accused Bai or Millard of any criminal wrongdoing and all three media outlets returned later to hear Millard’s side of the story. Nevertheless, Millard says being associated with suspect businesses in Chittenden County, along with two other recently busted Asian massage parlors in Bennington, was enough to scare away most of their clientele.

“They came up here and ambushed my wife, then ran a feature I didn’t even know about. And business just stopped for four days!” he says.

Millard places blame not on the media but at the feet of Barre’s mayor, whom Millard accuses of “racial profiling” and “ruining” his and his wife’s reputations. He is considering legal action against Lauzon.

“He targeted my business and put us on television. He didn’t even talk to me. That word, ‘Chinese,’” he says, pointing to the hand-lettered sign outside, “led the mayor of this city to call up [the press] and ask them to come here.”

Lauzon calls those accusations “ridiculous” and says he “absolutely did not” sic the media on Millard or Bai, nor did he make any allegations in council meetings about the nature of their business.

“I understand his concern, but we’re not talking about a specific gender or race,” Lauzon explains. “It wasn’t the word ‘Chinese’ that piqued my interest. It was the word ‘massage.’”

Lauzon’s 10-page proposed ordinance would have banned certain conduct in massage-related enterprises, including serving underage clients, full nudity and the practice of touching clients’ breasts, buttocks or genitalia. The ordinance also would have required all massage therapists and their employees to pay a $25 annual registration fee, be fingerprinted and photographed and undergo criminal background checks. The measure, which is similar to some enacted in municipalities elsewhere in the country to deter unscrupulous massage businesses, was strongly opposed by Barre-area massage professionals.

After speaking with Secretary of State Jim Condos, who oversees Vermont’s Office of Professional Regulation, Lauzon says he’s abandoned his ordinance effort. He says he’s heard state lawmakers will likely take up the issue of licensing massage therapists when the legislature reconvenes in January.

“We license beauticians, we license barbers, and we license tattoo artists and chiropractors,” Lauzon adds. While emphasizing that he has no reason to think Millard and Bai’s business isn’t legit, “If they were licensed, you wouldn’t have to ask that question, would you?”

Barre police chief Tim Bombardier reports no complaints related to this or any other massage business in the city. But Bai and Millard said they continue to experience harassment they suspect is racially motivated. In recent weeks, the couple’s sidewalk sign was stolen. One person came into the business and threatened Bai. Another received a 30-minute massage, only to bolt out the door without paying.

Millard notified the police about the offensive text message his wife still has on her cellphone. Neither of them has received one since.

Because Bai speaks little English and Millard speaks no Chinese, Seven Days hired professional Chinese interpreter Lili Feng to translate our interview. Bai said she came to the United States from her hometown of Fushun, a city in northern China, where she spent 10 years working as a nurse and massage therapist in an acupuncture clinic. Many of her previous clients had been stroke victims, she explained. Before becoming a nurse, she said she worked as a school librarian.

Millard said he and Bai met over the internet on a website called Asian Euro Dating, which provided Chinese-to-English and English-to-Chinese translations of their messages. Millard traveled to China three times to meet Bai and her family before proposing to her.

The couple was married in China in November 2009 and moved to Vermont in May 2011. Millard claimed he had to file three applications with U.S. Citizenship and Immigration Services before Bai was granted a green card. He said the process was time-consuming and cost him more than $70,000. He said USCIS “thoroughly” investigated the couple for about three years due to the high number of fraudulent marriages that occur between American men and Chinese women.

During the interview, it was evident that Bai didn’t know exactly what had been said about her business but “it’s not good ... something about a sexual encounter,” she said.

Asked if she provides anything other than massages, she laughed and shook her head no. She said that whenever she’s working, she never wears dresses or skirts because she doesn’t want to give her clients the “wrong idea” or a “bad impression.” Adding that her husband is almost always onsite while she’s working, she said, “How could I kiss anybody, as your newspapers say and not feel ashamed?”

Bai said she had to get her business up and running again so she could continue paying her 22-year-old son’s college tuition back in China.

“I don’t know why she hasn’t left and gone back to China. She may well do that,” Millard said with a sigh, after his wife left the room. “The damage is done. My wife wears a scarlet letter. We can go to Walmart and someone can say, ‘Look, there goes that woman from the massage parlor. She’s a prostitute.’”