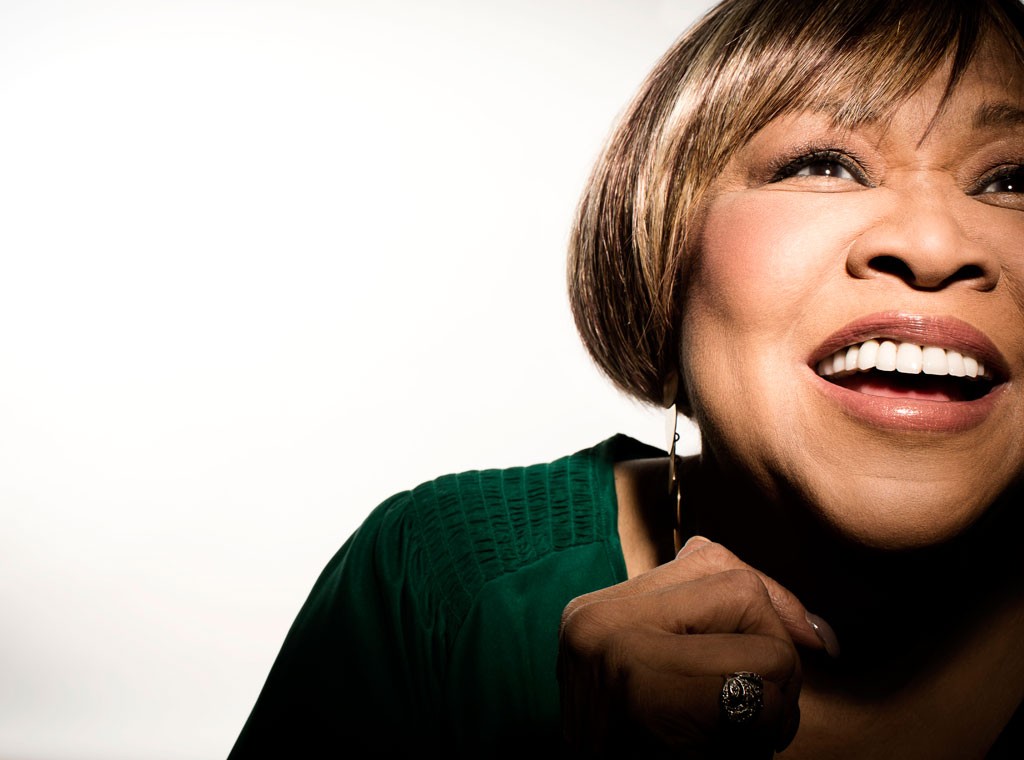 As iconic gospel divas go, Mavis Staples is one humble lady. In a recent 25-minute interview with Seven Days, she repeatedly returned to one theme in particular: how grateful she is for, well, pretty much everything, including her memory, her music, her friends, her time with Dr. Martin Luther King Jr. and, most of all, her late father, Pops Staples.

Indeed, the 75-year-old Rock and Roll Hall of Fame inductee has had much to be thankful for of late. She's just released a stirring new EP with up-and-coming young singer and producer Son Little, Your Good Fortune. Earlier this year, with the help of Wilco's Jeff Tweedy and his son, Spencer, Staples realized an album some 15 years in the making: the final, posthumous Pops Staples album Don't Lose This.

In the years leading up to those achievements, Staples enjoyed something of a career renaissance with two Tweedy-produced albums: One True Vine in 2013 and You Are Not Alone in 2010. The latter album scored her a 2011 Grammy Award for best Americana album. Incredibly, it was her first Grammy win, coming 61 years after she began her career as a member of the Staple Singers in 1950.

With that group, Staples became a musical and cultural force. Rooted in gospel tradition but achieving mainstream crossover success, the Staple Singers — who also included her father, brother and two sisters, in various iterations — were arguably the most popular spiritually based musical act in American history. They were also the most culturally important. Owing to Pops' friendship with Dr. Martin Luther King Jr., whom the group accompanied at rallies and speeches all over the country, the Staple Singers were the musical voice of the American civil rights movement.

In advance of Staples' headlining performance at the Burlington Discover Jazz Festival on Friday, June 12, Seven Days spoke with her by phone from Chicago to ask about her recent albums, her remarkable life story and that time some scruffy kid named Bob Dylan asked to marry her.

SEVEN DAYS: I was tickled to see that Son Little produced your new record. He's great. How did you two get together?

MAVIS STAPLES: Andy Kaulkin [head of Anti-Record Label] was here, and we were trying to figure out where I should go next. He had some videos on his phone he started playing. And I let them all go past until he got to Son Little. I said, "Wait a minute, Andy. Who is that?" And he said, "Son Little." I cracked up and started jiving him about the name.

But this kid has so much soul in his voice. We met after a show in New York, and we sat in a car and talked. He sent a song called "Your Good Fortune," and I loved it. Three weeks later, he sent "Fight," and I said, "Oh, my God." I was having fits because I loved the song so much. I'm just crazy about Son Little.

MS: I don't see him enough, though. He was supposed to be in Austin, Texas, when they did the premiere of my documentary [Mavis!, released in 2015]. I thought I was going to see him then, but I think he got lost in the parties and I missed him. [Laughs.]

SD: That's easy to do in Austin. Speaking of the documentary, was it a surreal experience to see your life on the big screen?

MS: Yes! I didn't think I was going to go see that. I don't even like to listen to my records with other people. I said, "I can't sit in that movie theater and watch myself on the screen." But it was so hip and so interesting, I was all in it. I thought it came out really, really nice. I can't wait for my friends to see it.

SD: You've told your story many, many times. And it seems like you are asked a lot about the same things over and over. Is there anything people don't ask you that you wish they would?

MS: Sometimes I get new questions. But it's really OK. I'm just glad I remember everything! [Laughs] I'm just so grateful that my memory is so good. As I tell those stories, I can still see us. To me it's a movie that I'm seeing all the time. And I'm glad about that.

SD: Well, it's a great story. So you have the new EP and the records with Jeff Tweedy. But I imagine being able to put together Don't Lose This was uniquely satisfying.

MS: Oh, my God. Actually, that was supposed to be the Staple Singers' last recording. And it is, because we're singing background for Pops. But when we learned Pops was sick, we said, "Let's let Daddy do this. Let's let this be Daddy's album."

There were some parts where he wasn't playing like he usually would, or he left some empty spaces. And this is what I needed Tweedy for, to tweak it.

After Pops passed [in 2000], there was nothing on the radar from any of us, from me, from the Staple Singers. I didn't know where to go. But then I got started again, and I said, "Well, now I can get Pops' music out. I've made some headway." I hadn't let anyone hear it for 15 years. But I knew what I had to do.

We were home one night [before Pops passed], and Pops said, "Mavis, bring the music. Let me hear it." So I took it to his room and left. After a while I went back to see how he liked it. He said, his voice was very soft, "Mavis, don't lose this." That was his last request to me.

I play it every day. But on Father's Day, I'm gonna play it loud as can be, and me and Pops are gonna celebrate. Yes, indeed.

SD: Switching gears, I was surprised to learn that you won your first Grammy fairly recently. I figured you would have won at least one before now.

MS: That was amazing. The first time we were nominated, the one we felt like we should get, "I'll Take You There" (1972), that record was the biggest record of the year, almost for two years. When they said, "And the winner is ... 'Papa Was a Rollin' Stone.'" We just sunk. But my father told us, "Listen, you all hold your heads up. I don't want you sulkin' for not winning a Grammy. A Grammy is not what you're singing for. That's an award. And you all are singing for your just reward."

After that, I just put the Grammy out of my mind. Because, just like Pops said, that was not what I was singing for.

So when I was up [for a Grammy] in 2011, I didn't really want to go. But I went, and the guy who was announcing was that guy [Bobby] McFerrin, the guy who sings that [sings] "Don't worry, be happy." [Laughs] So I said, "Oh, Lordy! That's him doin' this!" When he called my name, I got weak in the knees. I just couldn't believe it. But I'm just grateful that, before I leave this world, I have my one Grammy. And that's good enough for me.

MS: It sure did! Just like Pops said, "You're not singin' for no Grammy." And he was right. And I'm still not singing for no Grammy. Tweedy and I were nominated again. And I was hoping they'd let Tweedy win. But he couldn't come up against that guy ... Ferraro? Ferrari?

SD: I love that you call him "Tweedy."

MS: I had "Don't worry, be happy," and he had that. Maybe Son Little can win. I can't wait to hear his album. Have you heard this one "O Mother"?

You know, I'm looking at the world seeing the '60s all over again. When I see the news ... these young men, young black men, and white men, too, they need to hear "O Mother."

SD: The opening line of the song almost seems like a callback to the Staple Singers' song "Why? (Am I Treated So Bad)."

MS: Yes! There's so many good lines in there. He's telling such a truth. [Sings] "O mother, why do they treat me like I'm not a man?" And that's the way it's going today. I like when he says, "O mother, you taught me how to behave." I haven't heard that word, "behave," in I don't know when. I said, "This dude is country."

SD: Songs like "Why? (Am I Treated So Bad)" are just as relevant now as they were 40, 50 years ago. On the one hand, it's a testament to their staying power. But on the other, it means that things haven't really changed all that much.

MS: No. No, they haven't. Like I said, I'm seeing the '60s all over again. I've known it for a while. We didn't finish. Dr. King didn't finish. There's so much more to be done. But since that time, we've had no real leaders, no one speaking up. I've always tried to keep in my music. That's the only way I can help, to sing a song about it.

That song turned out to be Dr. King's favorite song. We used to sing before he would speak. And Dr. King would tell Pops, "Now, Stapes, you're gonna sing my song tonight, right?" And Pops would say, "Oh, yes, Doctor. We're gonna sing your song."

So I tell you, I'm grateful for my life, for what my father and what my family has stood for. And intend to continue for as long as I have my voice. I'm going to keep my father's legacy alive. He started this. He started it all. And when he saw Dr. King, met Dr. King, he said, "Listen, y'all. I like this man. And I think if he can preach it, we can sing it." And we haven't stopped.

SD: Amen to that. Last question: Do you ever wonder how your life might've been different if you had said yes to Bob Dylan?

MS: [Laughs] Yes! Oh, yes. I wonder about that. Recently I've been wondering about it more and more. But I've often wondered, What if I had married Bobby? Because I did like him a lot. Where would I be today, if we'd had some li'l crumb crushers and we had three or four? We woulda had us a group, the Dylan-Staples, or whatever we'd have called 'em.

MS: I tell ya. But I often wonder where we would be today had I married Bob Dylan. I think we would have done OK. We were both young. But that was the thing. I was too young. I told him, "Bobby, I don't know how to be married. My older sister's not even married yet." And that was the thing ... with a black family, period. The older sister has to get married first. But the thought of marriage scared me. I was 18, 19 years old.

Mavis Staples performs on Friday, June 12, 8 p.m., at the Flynn MainStage in Burlington as part of the Burlington Discover Jazz Festival. $15-48. discoverjazz.com

The original print version of this article was headlined "Fortunate Daughter"